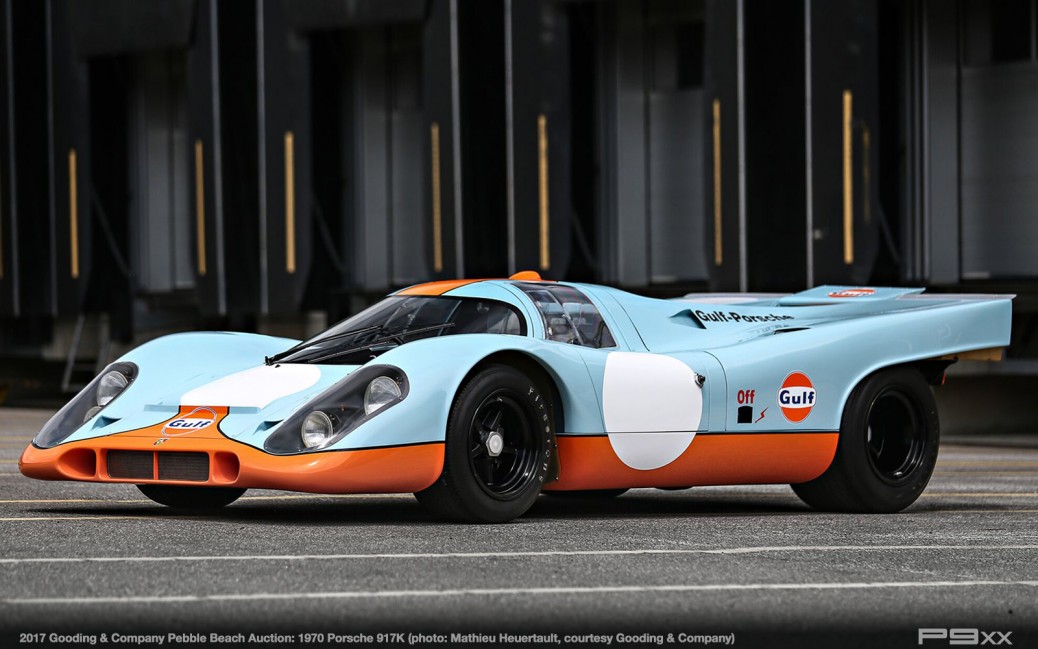 SANTA MONICA, CA – Gooding & Company, the official auction house of the Pebble Beach Concours d’Elegance®, is thrilled to reveal the addition of one of the most important and desirable competition cars of all time to the company’s Pebble Beach Auctions. The 1970 Porsche 917K, chassis 917-024, is an undisputed masterpiece of racing engineering with one of the most recognizable liveries in motorsport history.

“The Porsche 917 is among the most significant competition cars ever created and they remain highly coveted by knowledgeable enthusiasts worldwide,” notes David Gooding, President and Founder of Gooding & Company. “This example, with its fascinating history, iconic livery and exacting restoration, is among the most exciting racing cars that has ever come to public auction.”

1970 Porsche 917K
(Estimate: $13,000,000-$16,000,000)
Porsche had been competing for class wins in the world’s greatest endurance races since 1950, but lacked the proper machinery to challenge for overall victory in races such as the 24 Hours of Le Mans.  In 1969 they took advantage of new regulations and developed one of the most significant, beautiful, and advanced sports prototype cars in history, the 12-cylinder 917.  Further developed as the 917K (‘K’ for kurz or short tail), by 1970 the model became a dominant force in international competition.

The 917K presented here, chassis 917-024, was first used by Porsche during the 1970 Le Mans Tests, where it was piloted by Brian Redman and Mike Hailwood. Redman set the fastest times of the event, proving that the updated model was capable of winning the coveted 24-hour race, which it would accomplish two months later.  Following testing sessions at Le Mans, Nürburgring and Ehra Lessien, 917-024 was sold to Porsche factory driver, Jo Siffert, who leased the car to Steve McQueen’s Solar Productions for use in the making of the seminal film Le Mans (1971).  According to extensive research by noted 917 historian and author the late Walter Näher, 917-024 was utilized as a camera car during production, and also starred extensively during the film. Following its Hollywood stint, 917-024 remained in Siffert’s private collection until his passing. Chassis 024 led his funeral procession, which was reflective of the 917’s importance in his life, before being sold to a private collector in Paris in the mid 1970s.

Chassis 917-024 remained hidden and largely unknown for roughly 25 years, before re-emerging in 2001 from a warehouse outside Paris in one of the greatest ‘barn find’ discoveries ever. Covered in dust and still in its Gulf JWA livery from Siffert’s ownership, 024 was remarkably untouched after more than two decades in hiding. Even the original space-saver spare, Firestone fuel cell, and Firestone Super Sports GP tires were still in place, as well as a handwritten tag hanging from the key with instructions to run lean given the Le Mans set up, believed to be notated by Porsche driver Herbert Linge.

The 917 has recently benefited from an exceptional restoration, led by specialist Graber Sportgarage in Switzerland and finished in 2017. Presented today from a private European collection, this is surely one of the most correct and significant 917s in existence and easily one of the finest racing cars ever to come to public auction. The offering of 917-024 is a momentous occasion and the opportunity to acquire a car of this stature is not to be missed.

About Gooding & Company
Gooding & Company’s auctions, now in their second decade, produce market-leading prices and deliver to a worldwide reach of clients and enthusiasts. Throughout 2017, spectators and patrons from over 50 nations witnessed this year’s auctions live in high-definition video broadcast via our webcast. Gooding & Company’s annual Scottsdale Auctions will take place on January 19 and 20, 2018, in charming Old Town Scottsdale, AZ. In addition, the auction house’s annual Amelia Island Auction will be held on March 9, 2018, in Amelia Island, FL. Bidder registration forms, press credentials and additional auction information are available at www.goodingco.com or by calling (310) 899-1960. Follow Gooding & Company on Facebook, Instagram, Snapchat, YouTube and Twitter.