Roar Before the Rolex 24: Day 1 Report 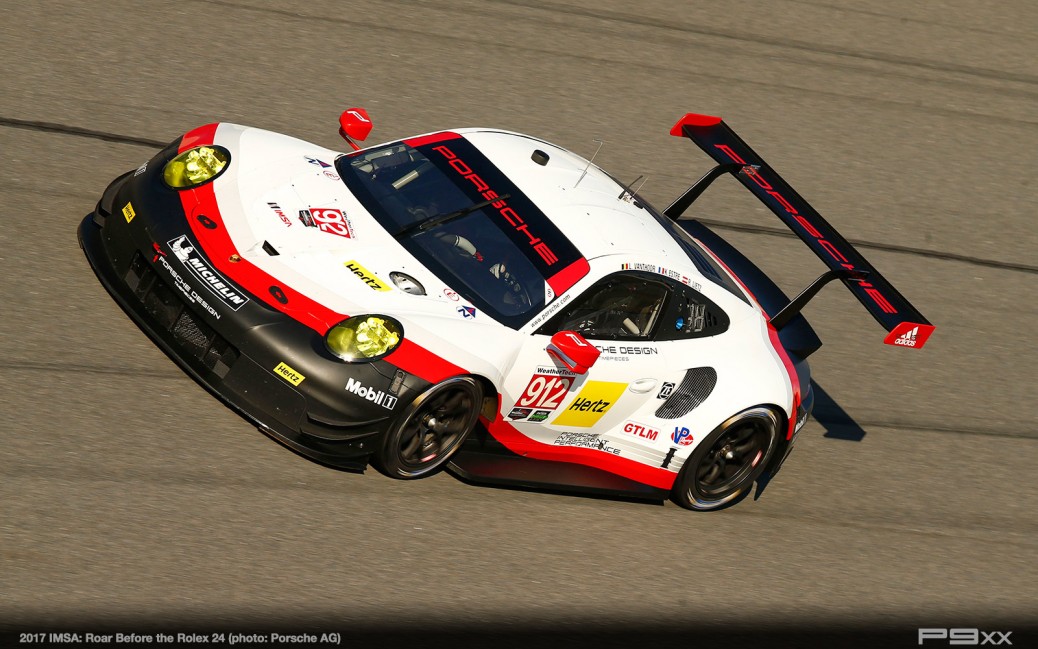 Stuttgart. The countdown for the Daytona 24 Hours is on: At the “The Roar before the Rolex 24”, drivers and teams are using this weekend at the Daytona International Speedway to get ready for the storied season-opener of the IMSA SportsCar Championship. The world famous long distance classic will be contested on 28/29 January at the legendary racetrack in Florida. At the three-day official test, the main focus for the Porsche GT Team factory squad is to setup the new Porsche 911 RSR in preparation for the start of the most important sports car championship in North America. Five customer teams field the Porsche 911 GT3 R. Three new Porsche works drivers – Laurens Vanthoor (Belgium), Dirk Werner (Germany) and Sven Müller (Germany) – also take part.

In addition to the IMSA SportsCar Championship, the 911 RSR will also be campaigned as a works entry in the WEC Sports Car World Endurance Championship. The successor to the most successful GT race car of the last years, which secured no less than 22 victories and eight championship titles between 2013 and 2016, is a completely new development: the suspension, body structure, aerodynamic concept, engine and transmission have all been designed from scratch. The engine, now in front of the rear axle, enabled the designers to install a particularly large rear diffuser. Combined with a top-mounted rear wing adopted from the LMP1 919 Hybrid race car, the level of downforce and the aerodynamic efficiency were significantly improved. The particularly modern and light normally-aspirated engine gave the engineers immense latitude in developing the vehicle. Depending on the size of the restrictor, the power plant puts out around 375 kW (510 hp). Shift paddles actuate the sequential six-speed gearbox with a magnesium housing, which delivers power to the 31-centimetre-wide rear wheels. The serviceability has also been significantly improved: Entire elements of the carbon-fibre body can be exchanged completely in a very short time thanks to clever quick-release fasteners. Moreover, changes to the suspension setup can be performed much more quickly and easily.

This weekend, the Porsche GT Team puts the two 911 RSR featuring a new factory design through their paces on the Daytona International Speedway. They face strong competition in the GTLM class from BMW, Chevrolet, Ferrari and Ford. Sharing the #911 vehicle for the test and race are Patrick Pilet (France), Dirk Werner and Frèdéric Makowiecki (France), with Laurens Vanthoor, Kévin Estre (France) and Richard Lietz (Austria) at the wheel of the #912 car. Until Sunday, five other Porsche factory drivers are preparing with customer teams for the 24 Hours of Daytona: Jörg Bergmeister (Germany/Park Place Motorsports), Michael Christensen (Denmark/Alegra Motorsports), Wolf Henzler (Germany/TRG), Patrick Long (USA/CORE Autosport) as well as Supercup champion Sven Müller (Germany/Manthey Racing). They drive the Porsche 911 GT3 R, which celebrated its race debut a year ago in Daytona mounted with the new ultra-modern, four-litre, flat-six engine with direct fuel injection. The 500 hp customer sports racer, which was designed by Porsche for the worldwide GT3 series on the basis of the 911 GT3 RS production sports car, will tackle the GTD class.

“This test is very important. It’s the starting signal for the new racing season. Following the short Christmas break, these three days are about re-examining and perfectly synchronising all the routines and procedures within the team,” says Marco Ujhasi, Overall Project Manager for GT Works Motorsport. “Of course, there is still a lot to learn with the new 911 RSR and we need to try out various parameters. That’s exactly what we’re doing from session to session. We have a precise plan that we’re working through point by point. Hopefully we’ll be able to put a tick next to each one on Sunday and know how we’ll tackle the race in three weeks. With time so short, the set-up work we do now will be of benefit for the race weekend.”