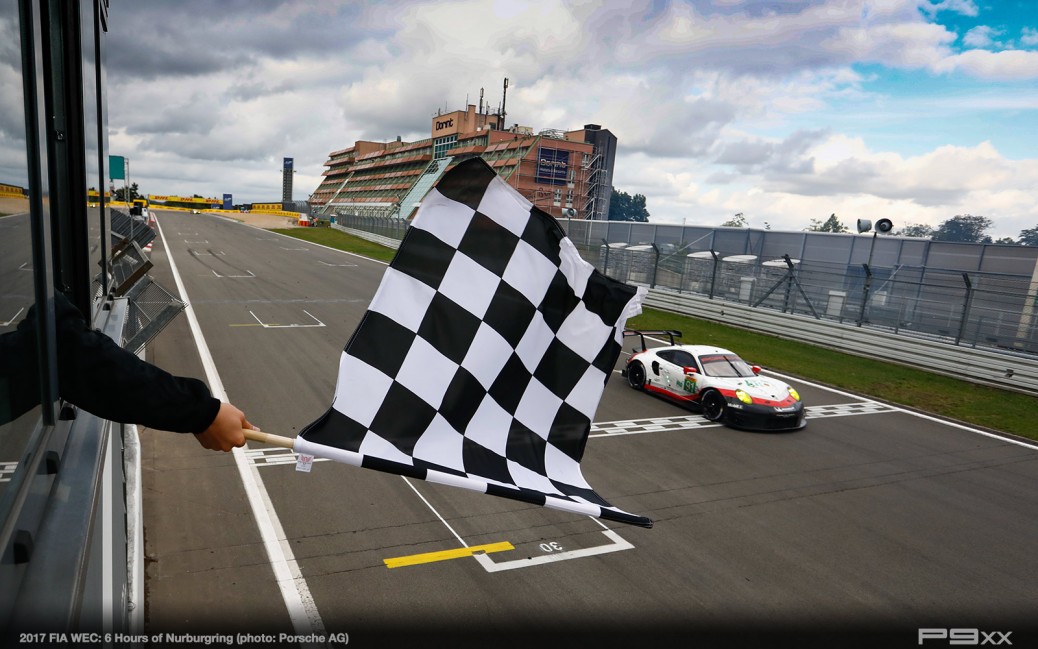 Stuttgart. A successful home race for the new Porsche 911 RSR in the Sports Car World Endurance Championship WEC: At the six-hour race on the Nürburgring, the 510 hp racer, designed and built by Porsche Motorsport in Weissach for this season, claimed two podium places. In the #91 vehicle, Richard Lietz (Austria) and Frédéric Makowiecki (France) secured second place in the fiercely contested GTE-Pro class on the Eifel circuit. At the wheel of the second 911 RSR (#92) fielded by the Porsche GT Team, Michael Christensen (Denmark) and Kévin Estre (France) finished on third in front of 52,000 spectators. In the GTE-Am class, the Porsche Young Professional Matteo Cairoli (Italy) celebrated his first win in the world championship with the 911 RSR run by the Dempsey Proton Racing customer squad. Dark clouds hung over the Grand Prix circuit of the Nürburgring as the 29 contenders took off into the six-hour race. However, the dreaded changeable Eifel weather stayed away. The odd raindrop had no influence on the race. Despite taking up the race from pole position, Michael Christensen was unable to hold his front spot and fell back to fourth place in the first lap after making a braking error. However, his teammate Frédéric Makowiecki moved up into position two and later even took the lead. After the first round of pit stops, the old qualifying order was restored: Kévin Estre led the strongly represented GT field with the #92 car, with the #91 vehicle driven by Richard Lietz running third. Implementing different pit stop strategies, the team colleagues swapped positions several times over the course of the race, and by half way a 911 RSR was still holding its own at the front of the field. This changed only two and a half hours before the finish, when the Ferrari pulled ahead. From this point on, the 911 RSR put in consistent lap times to maintain a commanding second and third, and remained out of reach to the flag for the rest of the GT field. In the GTE-Am class, in which Porsche customer teams fielded the 911 RSR from the 2015 model year, Dempsey Proton Racing celebrated its first win of the season. Sharing the cockpit of the #77 racer was the Porsche Young Professional Matteo Cairoli (Italy) with Christian Ried and Marvin Dienst from Germany. After their third place at the season opening round at Silverstone and second at Spa, they followed the law of series and took the flag as the winners.

Round five of the Sports Car World Endurance Championship WEC will be contested in Mexico City/Mexico on 3 September. Comments on the race
Dr. Frank-Steffen Walliser, Vice President Motorsport and GT Cars: “We witnessed an excellent race today. The situation in the GT classes was extremely competitive, which was fantastic for the fans. In the GTE-Pro class, we’re talking about an average of less than three-tenths of a second per lap that made the difference. We’re very happy to have secured second and third place. The first win for the new 911 RSR is within reach. We’re also particularly thrilled about our Young Professional Matteo Cairoli, who claimed his first WEC victory in the GTE-Am class with our customer team Dempsey Proton Racing. Considering the success of the 919 Hybrid this weekend, it was virtually a perfect Nürburgring weekend for Porsche.”

Richard Lietz (911 RSR #91): “That was a good race for us. We had a perfect strategy. We wanted to start on used tyres and finish with a double stint on fresh tyres. Basically this strategy worked. Our team did a fantastic job. Second and third is more than we could expect. We’ve made huge improvements since the first races. I’m very pleased.”

Frédéric Makowiecki (911 RSR #91): “It’s great to be back on the podium. That was a tough race. Even at Le Mans, our pace was good with the new 911 RSR, and we clocked consistent lap times again here. During my first stint I managed to take the lead. But in the second half of the race, the Ferrari was a little faster, particularly towards the end of the stint. That made the difference today. We’re very close to claiming our first victory with our new 911 RSR and we want to achieve this as soon as possible. Perhaps we can do it at the next round in Mexico.”

Michael Christensen (911 RSR #92): “That was a good day for the team and for Porsche. Of course you always want to win, particularly on Porsche’s home turf here at the Nürburgring, but unfortunately that wasn’t possible today. Our 911 RSR ran excellently on the new tyres, but over the double stints we weren’t the fastest today. We need to work on this and hopefully we’ll have taken a step forward by the next race.”

Kévin Estre (911 RSR #92): “That was a good race for us, much better than the first three this season. We set pole position and were in the lead – but unfortunately that wasn’t enough to secure the first victory for the new 911 RSR. The Ferrari was too strong in the double stints. We put up a great fight against the rest of our rivals and we’re all very close. Our setup was good, there’s only minor things which we’ll now work on. The maiden victory is hopefully just a matter of time.”

Matteo Cairoli (911 RSR #77, Dempsey Proton Racing): “To secure my first win in the WEC at Porsche’s home race is fantastic. I’m super happy and very grateful to Porsche and Dempsey Proton Racing for giving me the chance to compete in such a top-league championship with the 911 RSR. A dream came true for me today. The last laps with the Ferrari breathing down my neck were the toughest in my racing career. I knew that he was only seconds behind me. Thank you to the entire team and to my teammates for their tremendous support.”