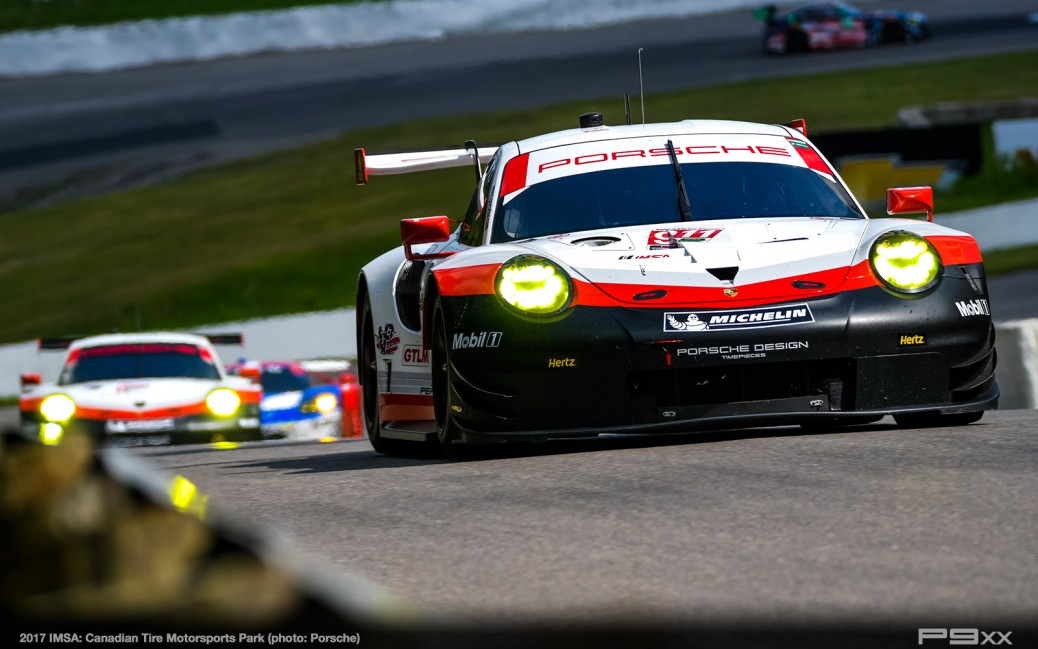 Stuttgart. Premiere for the new Porsche 911 RSR: The 510 hp racing car, which was developed from scratch for this season by Porsche Motorsport in Weissach, takes up Sunday’s race in Canada for the first time from pole position. In qualifying for the sixth round of the IMSA SportsCar Championship contested in the Canadian Tire Motorsport Park close to the metropolis of Toronto, Dirk Werner (Germany) set the fastest time in the GTLM class with the #911 Porsche 911 RSR. His teammate in the race is Patrick Pilet (France). Porsche’s strong performance on the 3.957-kilometre high-speed circuit was rounded off by the sister 911 RSR fielded by the Porsche GT Team, with Laurens Vanthoor (Belgium) claiming the third grid spot less than two-tenths of a second off the pole-setting time. For the race, he is joined in the #912 cockpit by Gianmaria Bruni (Italy).

The qualifying on the former Mosport International Raceway was again fiercely contested: only eighth-tenths of a second separated the eight starters in the GTLM class. This promises to be yet another gripping race for the fans. Qualifying quotes
Marco Ujhasi, Overall Project Manager GT Works Motorsport: “The first pole position for our new 911 RSR feels fantastic. It’s the well-deserved reward for the team, who never stopped putting in hard and focused work, despite several setbacks. Dirk drove a fantastic lap. We were often fast this season, but here we finally managed to pull everything together to end up on pole. It was only the qualifying, but we’re still delighted. A huge thank you to Weissach and everyone who played a part in this great project.”

Dirk Werner (911 RSR #911): “We’ve waited a long time for this pole position. There were many weekends where our 911 RSR was fast, but this time everything came together really well. We made the right decisions in practice. Thank you to the team for putting such a great car on the track for us. We were the only ones who tested here before the race and we were able to sort out a lot of things and find a good baseline setup. We then refined it and that paid off today.”

Laurens Vanthoor (911 RSR #912): “First and third – that’s a great result for Porsche. We implemented a different strategy compared to our teammates because we find it more promising for the race. I hope that it pays off on Sunday. This circuit is crazy. There are not many like it in the world. One tiny mistake and you end up in the guardrail. To turn a fast qualifying lap here is a great challenge.”

The race takes off on Sunday, 9 July, at 12.05 hrs local time (18.05 hrs CEST) and can be viewed live outside the USA and Canada on www.imsa.com. More photos of this race can be found HERE.