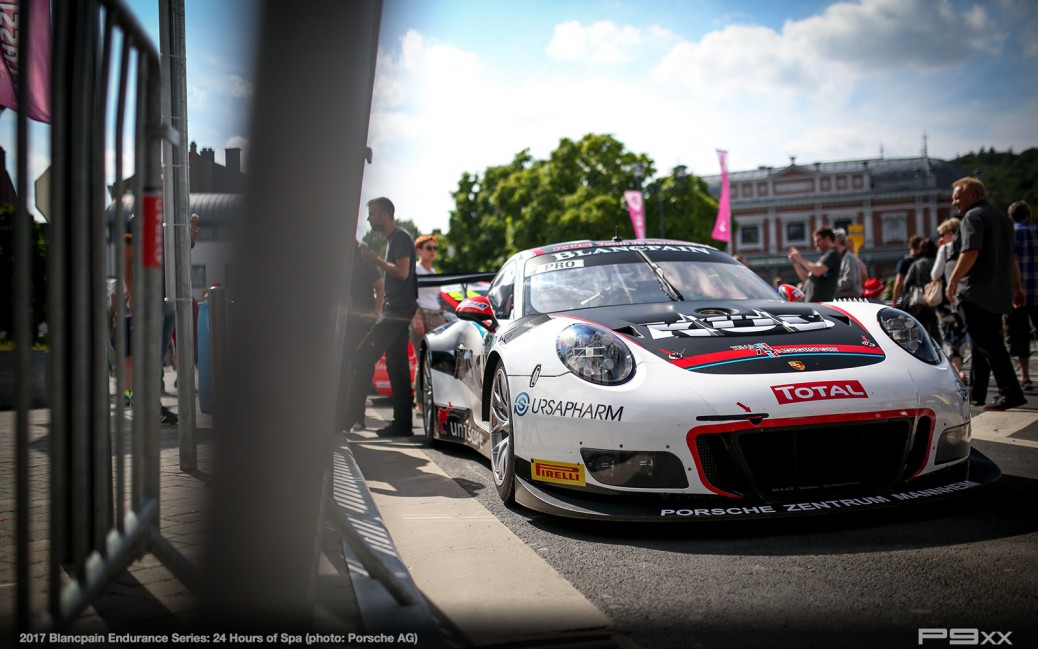 Stuttgart. The three Porsche 911 GT3 R tackled the first qualifying on Thursday in preparation for the important night qualifying at the 2017 24 Hours of Spa. During the night session, the 20 fastest cars will qualify for the Super Pole, which will be held on Friday.

The 500 hp 911 fielded by the KÜS Team75 Bernhard posted the 15th quickest time in the first qualifying session on the tradition-steeped Circuit de Spa-Francorchamps. With this result, Kévin Estre (France), Michael Christensen (Denmark) and Laurens Vanthoor (Belgium) will secure themselves a spot in the Super Pole, as long as the lap times in the night qualifying are not considerably faster.

In the Pro-Am class, the two Porsche 911 GT3 R run by the Herberth Motorsport team have good chances of making it to the Super Pole. Sven Müller, who shares driving duties in the #912 Porsche 911 GT3 R with Mathieu Jaminet (France), Daniel Allemann (Switzerland) and Ralf Bohn (Germany), clocked the 21st fastest time, a mere four-thousandths of a second shy of the crucial 20th spot. The second Herberth Motorsport entry concluded the first qualifying on position 37. With the extremely close times, the all-German driver lineup of Marc Lieb, Jürgen Häring as well as Alfred and Robert Renauer could make it into top 20 in the night qualifying. Timo Bernhard, team owner KÜS Team75 Bernhard: “That was an exciting session. We’re on 15th, that’ll be enough. But we’re now heading into the night session. Our pace was good, but we encountered a lot of traffic.”

Alfred Renauer, team owner and driver Herberth Motorsport (911 GT3 R #911): “We always got held up by heavy traffic and we simply need a clear run. Still, the car feels good and that makes me optimistic for the race. With such a close field, something is possible from any starting position.”

Laurens Vanthoor (911 GT3 R #117): “Unfortunately I had a lot of slower cars in front of me, but we were able to make some minor improvements on the car. Spa is something special; although the circuit is very demanding, everyone likes to race here.”

Sven Müller (911 GT3 R #912): “I had a perfect run in almost every sector. The car felt good, even over longer distances. Many passages can be driven at full throttle here, especially Eau Rouge. That makes tyre management a bit tricky. We’ll go all-out in the night qualifying.”

Marc Lieb (911 GT3 R #911): “We had bad luck with traffic in every lap and so we couldn’t make the most of the car’s capabilities. It’ll be tough to make it into the top 20, but we want to optimise the car for the race.”