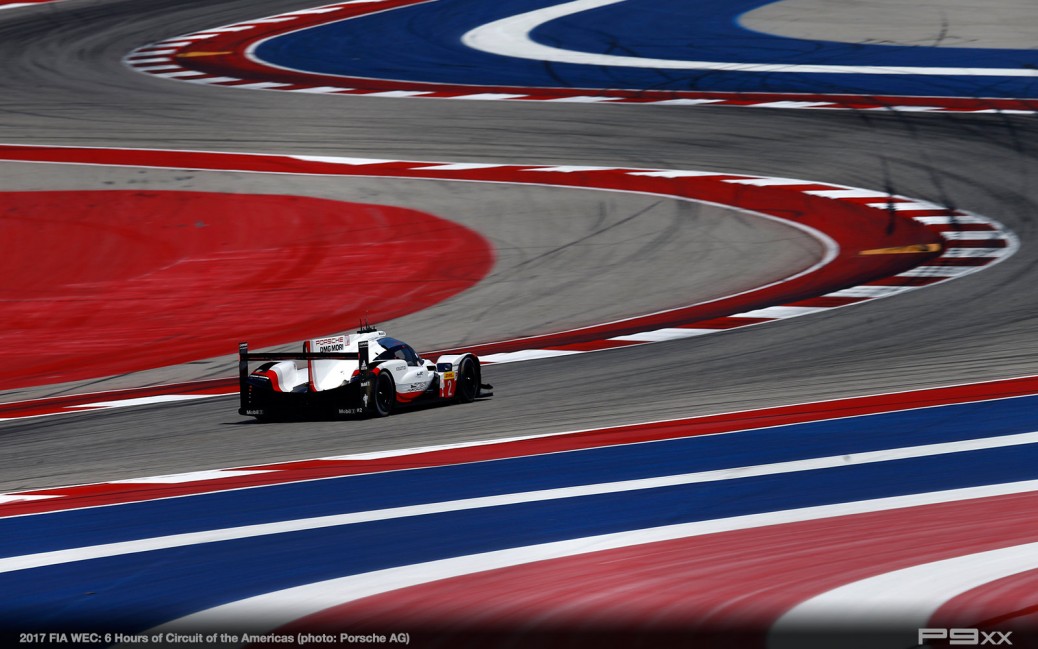 Stuttgart. The two Porsche 919 Hybrids of the Porsche LMP Team made a great start for the race weekend in Austin, Texas (USA) by setting the best times in free practice. The Circuit of the Americas (COTA) hosts the sixth of nine rounds of the FIA World Endurance Championship (WEC) on Saturday. The 5.513 kilometre long Formula One circuit is a challenging track. Additionally, the current ambient temperature of 34 degrees Celsius is expected to be the same for the six-hour race. Porsche hopes to make another step towards their aim of title defence.

See the full P9xX photo gallery of this event HERE.

Current world champion Neel Jani (CH), who shares a Porsche 919 Hybrid with André Lotterer (DE) and Nick Tandy (GB), set the best lap time of the day in 1:45.860 minutes at the beginning of the second session this afternoon. Earl Bamber (NZ) was second fastest in the sister car, doing a lap in 1:46.401 minutes. Bamber and his partners Timo Bernhard (DE) and Brendon Hartley (NZ) are the current world championship leaders. In the first of the two 90-minute free practice sessions this morning, the two Porsches also topped the time sheets but in reverse order: Bamber (1:48.124 minutes) ahead of Tandy (1:48.269 minutes).

The 20-minute LMP qualifying session will be held on Friday from 15:35-15:55 hrs local time. The race will start on Saturday at noon. Andreas Seidl, Team Principal: “This was another very positive first day for us. The team is geared up very well for the heat. The prepared cooling configurations worked perfectly from the start. Both cars ran trouble-free allowing us to complete our job list. With both 919, we did qualifying simulations as well as long runs to compare tyre compounds for the race. Now we want to further improve the cars. But given the heat, at the same time we have to make sure not to put too much work load on the crew and drivers.”

Neel Jani (33, Switzerland): “In the first session the boost configurations weren’t quite right in the beginning, but we sorted that out quickly and then constantly improved. The qualifying simulation in the afternoon worked well from the word go, although I can still spot some room for improvement. Overall, for us everything works according to plan.”

André Lotterer (35, Germany): “The car feels very good. My colleagues did a good qualifying simulation in the second session before I got in the car for the long runs. I have tried different compounds and now we will analyse and decide what makes most sense for the race. The temperature in the cockpit actually is quite okay. Only when I stop the car to talk with the engineers and the air flow is obviously missing, does it become really hot in there.”

Earl Bamber (27, New Zealand): “So far everything went well. We were good in the first session and also the qualifying runs worked fine. Both cars were performing really well and I hope we can continue this speed into tomorrow. I don’t really notice the heat because living in Kuala Lumpur, I’m used to such temperatures.”

Timo Bernhard (36, Germany): “On my qualifying simulation in the afternoon I had some difficulties to get a clear lap, but anyway the more important aspect was to feel the car’s balance. This wasn’t bad at all, but there is still a bit of work to do. Compared to the most recent race in Mexico, I think the Toyotas are closer to our performance but we still should have a small advantage.”

Brendon Hartley (27, New Zealand): “Tyre degradation and management will be a big topic in the race. I did the long runs with our car in the afternoon. I have tested two different compounds and I’m very happy with how that went. ”

TV and live streaming:
– The official WEC App can be downloaded free of charge with an extended (not free of charge) version available which includes full live streaming and full timing. The live stream is voiced by the FIA WEC TV team including live interviews from the pits.
– The WEC races can be followed on various international TV channels around the world. For details click here: https://tinyurl.com/y7n9amhn