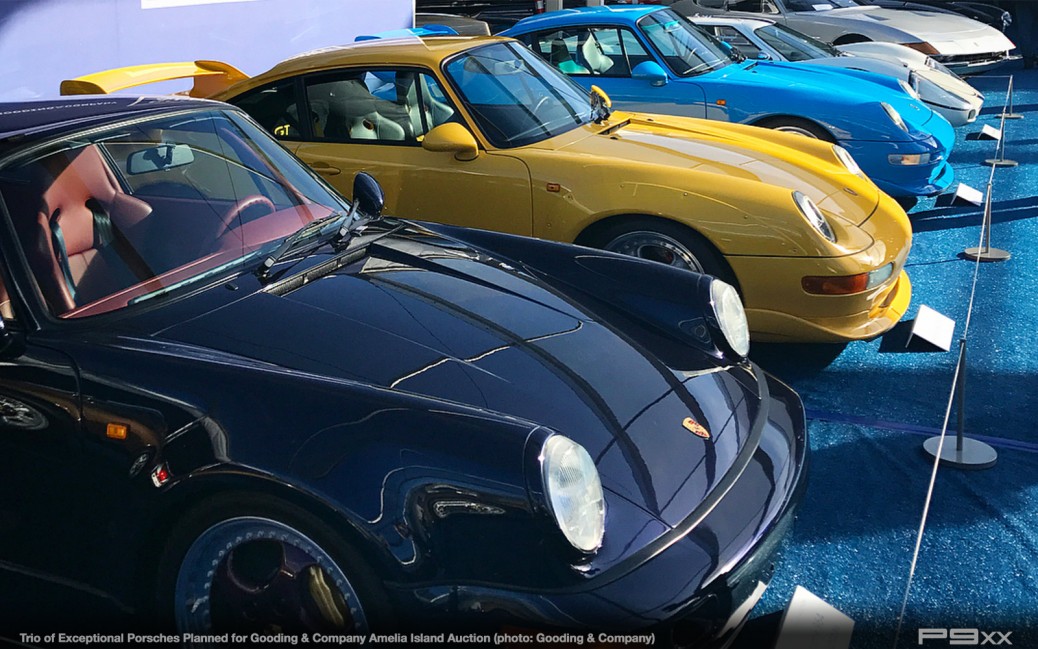 SANTA MONICA, Calif. – Gooding & Company, the auction house acclaimed for selling some of the world’s most significant and valuable collector cars, is thrilled to announce a trio of exceptional Porsches to be offered at the company’s Amelia Island Auction held on March 9, 2018. These three rare homologation models on offer are among the most exclusive air-cooled 911s of the modern era, making them highly sought-after by astute Porsche collectors. Gooding & Company is also pleased to announce the addition of real-time online bidding on select vehicles beginning at the Amelia Island Auction. The auction house invites you to speak with a Gooding & Company staff member for more information.

Selections from an Exclusive Porsche Collection
“These three cars represent the very best of what Porsche produced in the 1990s,” says Senior Specialist David Brynan. “We know that today’s collectors are not merely looking to just acquire a rare Porsche model, but demand the very best example. Astute clients have become increasingly selective, and Gooding & Company has responded by consigning exceptional, high-quality Porsches, which are ideally specified, well documented, and presented in pristine condition.”

1993 Porsche 964 Turbo S Leichtbau
The 1993 Porsche 964 Turbo S Leichtbau on offer is an exceptional, bespoke example that has covered less than 100 kilometers from new. The 964 Turbo S Leichtbau is one of the ultimate air-cooled Porsches – an extremely limited production model combining an RS chassis, special turbocharged engine, and Exclusive Department attention to detail. This particular car was specially ordered with numerous unique and highly desirable options not seen on any other Leichtbau. These specifications include a full roll cage wrapped in the same Oxblood leather interior seen throughout the interior, Amethyst painted wheels, gold painted brake calipers, and striking Midnight Blue metallic exterior paint. This extremely low-mileage car has been carefully preserved and maintained in just two discerning private collections and is undoubtedly the finest example of this extraordinary breed ever offered. For the collector in search of a highly original, ideally specified, and well-maintained example of this ultra-rare Porsche, this is an opportunity that should not be missed.

1996 Porsche 993 GT2
A true homologation special with outrageous looks to accompany its electrifying performance, the 993 GT2 is the grand finale in a long line of turbocharged air-cooled Porsche 911s. The rarity and motorsport pedigree of these machines, coupled with the overall acceptance of special 993 variants as true collectibles, has catapulted the original GT2 to the top of many collectors’ must-have lists. The car presented here is a vibrant Speed Yellow example with a specially ordered interior featuring black and yellow bucket seats. Delivered new to Germany, this particular GT2 was highly optioned with air-conditioning and electric windows. Held in a climate-controlled environment and dutifully maintained, this Porsche has been driven less than 10,000 kilometers from new and remains in superb condition.

1996 Porsche 993 Carrera 3.8 RS
The most extreme normally aspirated variant of the beloved 993 series, the Carrera 3.8 RS was a track-focused sports car and the most powerful non-turbocharged Porsche at the time of its introduction. The Porsche 993 Carrera 3.8 RS on offer is presented in ultra-desirable Riviera Blue, the most sought after livery for the model. This car was specified for German delivery and desirably equipped with matching Riveria Blue painted seat backs, manual windows, and a three-spoke motorsport steering wheel, as well as Exclusive Department custom touches. In magnificent condition and showing less than 13,000 kilometers from new, this Carrera RS is surely among the finest examples extant.