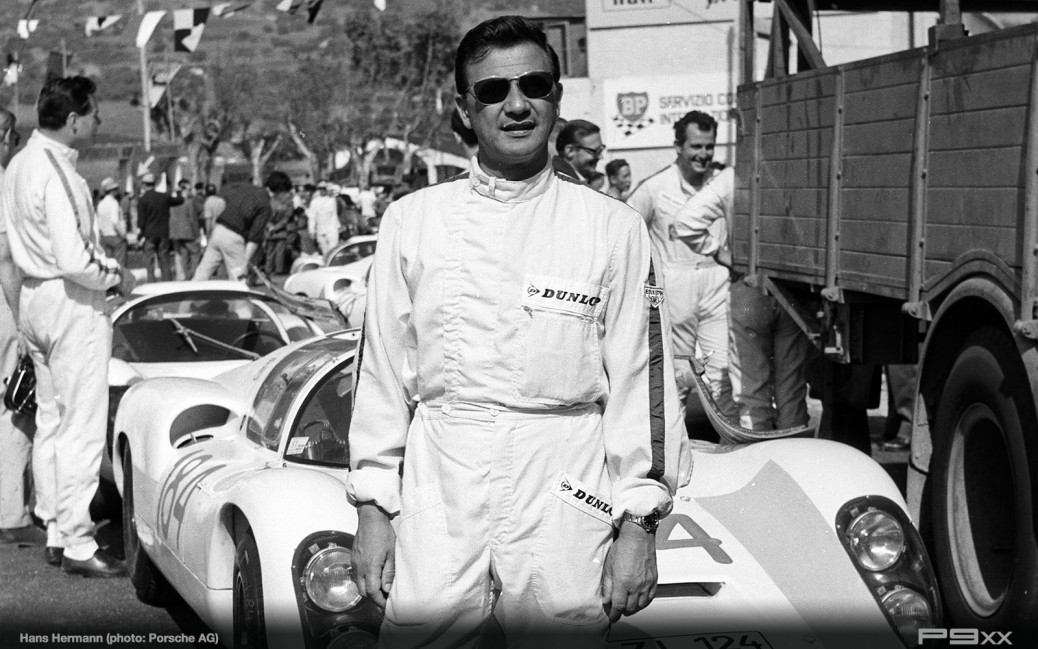 Stuttgart. Hans Herrmann, one of the most successful and popular racing drivers to join the Porsche AG works team, will be celebrating his 90th birthday this year on February 23. The endurance and Monoposto specialist, born in Stuttgart in 1928, is regarded as one of the most reliable and consistent race drivers of all time. In the course of his motor sport career, Hans Herrmann won more than 80 overall and best of class vic-tories, most of them for Porsche. The proverbial “Hans im Glück” (Hans in Luck) at the wheel celebrated his greatest successes with sports cars from Zuffenhausen: in the Mille Miglia, the Targa Florio, the Carrera Panamericana and of course in Le Mans, with the first overall victory for Porsche in 1970, driving a 917. His career began appropriately: in 1952, in a private Porsche 356, he took part in hill climbs, rallies and reliability runs. The very next year, he came fifth in the Lyon-Charbonnières Rally, together with Richard von Frankenberg in a Porsche 356. Thereupon Porsche’s racing manager at that time, Huschke von Hanstein, brought him into Porsche works team. In 1953, Herrmann went to the start for the first time in the 24 Hours of Le Mans where, together with co-pilot Helm Glöckler in a Porsche 550 Coupé, he gained a best of class victory in the category up to 1.5 liters capacity at his very first try. After Herrmann had also secured the title of German Sports Car Champion in the same year, he attracted the attention of Mercedes-Benz head of racing Alfred Neu-bauer, who integrated the 26-year-old into his works team along with Juan Manuel Fangio, Stirling Moss and Karl Kling. Parallel to this, in 1954 Herrmann continued to start for Porsche and gained prestigious class victories in the 550 Spyder in the Mille Miglia and the Carrera Panamericana.
Never to be forgotten is the spectacular incident that occurred during the Mille Miglia in 1954, when Herrmann and his co-pilot Herbert Linge ducked flat under the bar-riers to cross the rails at a closed level crossing, right in the path of a rapidly ap-proaching train. Later, Herrmann made a photo of the spectacular moment the sub-ject of a letter card, with the inscription “Glück muss man haben” (“You’ve got to be lucky”). In conversation, he completed this definition in a much more serious under-tone: “Glück hat, wer als Rennfahrer überlebt.” (“Luck, for a racing driver, is to survi-ve”). When in 1955 the Daimler-Benz works withdrew from motor sport, Hans Herrmann was at the start again for Porsche. There followed the wandering years with Masera-ti, B.R.M and Borgward and, in 1959, the next homecoming to Herrmann’s ‘own brand’, Porsche. Together with Olivier Gendebien in a Porsche 718 RS 60 Spyder, he won the 1960 12 Hours of Sebring, achieving Porsche’s first overall victory in a manufacturers’ world championship endurance race. Shortly afterwards, the combi-nation Hans Herrmann/Porsche RS 60 Spyder, together with Joakim Bonnier, also won the round Sicily ‘Targa Florio’. In 1960, Herrmann also became Formula 2 Eu-ropean Champion with the Porsche 718/2.

In 1962 he changed to Carlo Abarth and was active as works driver for the Vienna design engineer from 1963. Three years later, in 1966, he returned to the Porsche works team once again. Not only did Herrmann take part in all the great endurance races, besides driving European hill climb championship courses; he also carried out countless test drives in the – then newly-opened – Weissach Development Cen-ter. In 1969 the Porsche works team, with pilots Hans Herrmann, Jo Siffert, Vic Elford, Rolf Stommelen, Udo Schütz and Gerhard Mitter, gained the manufacturers’ world championship title for Porsche for the first time. Previously, Hans Herrmann had fi-nally had to hand the victory to Jacky Ickx in a Ford GT 40 after 24 hours of fierce fighting, owning himself beaten by 120 meters in one of the most thrilling Le Mans races of all time. One year later, things went better for him: in his eleventh Le Mans he was able to gain Porsche’s first overall victory.

He took this climax of a career in motor sport as the occasion to withdraw from active racing at the age of 42. He had also promised his wife Madelaine before the race that if he won he would give up his dangerous profession. As a pilot of historic race-cars, he also takes part in many vintage car events for the Porsche Museum, inclu-ding the “Le Mans Classic”, the “Targa Florio” and the “Solitude Revival”.