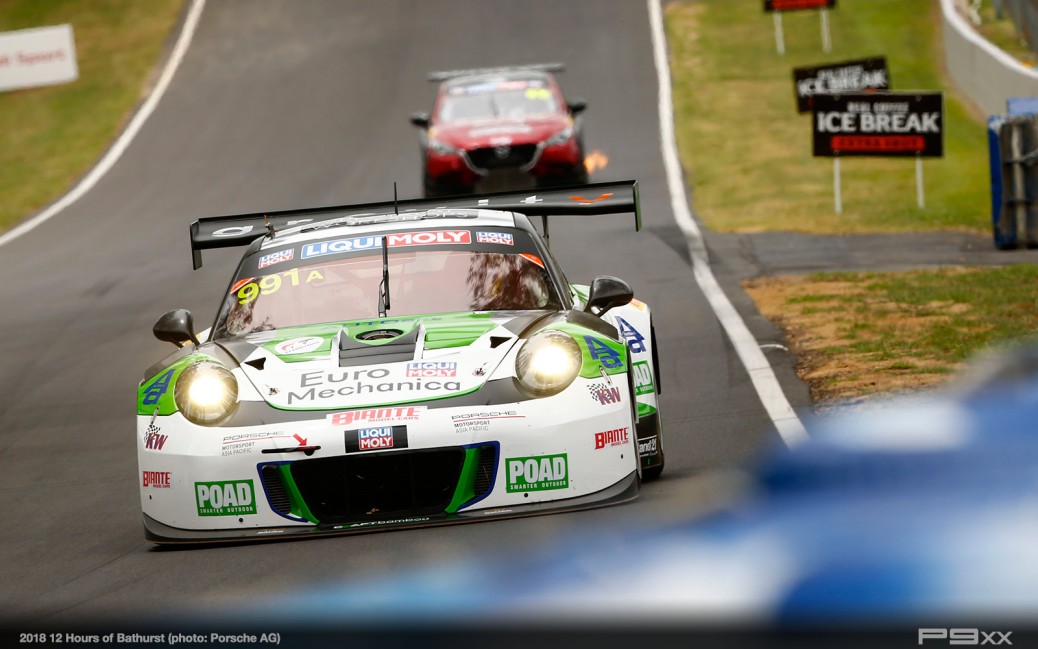 Stuttgart. The Porsche 911 GT3 R racers have launched an exceptional charge through the field to significantly improve their positions at the twelve-hour race in Bathurst. After the half-distance mark of the endurance classic at the legendary Mount Panorama Circuit in the Australian state of New South Wales, all four of the Weissach-built racers fielded by international Porsche customer teams are running amongst the top ten in the overall classification. The best-placed 911 GT3 R is the Craft Bamboo Racing entry from Hong Kong, in which Earl Bamber (New Zealand), the defending long distance world champion and two-time Le Mans winner, is currently running in third. His teammates are Laurens Vanthoor (Belgium), who ploughed from the 18th grid spot to third place in the first three hours of the race, as well as Kévin Estre (France). The 911 GT3 R was designed by Porsche Motorsport for worldwide GT3 series on the basis of the 911 GT3 RS production sports car.

At the opening round of the Intercontinental GT Challenge, which traditionally starts in darkness at 5:45am, the other 911 GT3 R have also advanced through the field. Manthey-Racing’s 911 GT3 R, driven by Romain Dumas (France), Dirk Werner (Germany) and Frédéric Makowiecki (France), has so far made up 21 positions thanks to consistent fast lap times and a perfect pit strategy and is currently lying in fifth place. In the 911 GT3 R fielded by the Australian team Competition Motorsports, Patrick Long (USA) took the lead after four and a half hours. With Porsche Young Professional Matt Campbell and his Australian compatriots David Calvert-Jones and Alex Davison, they currently rank sixth. Driving the 911 GT3 R of the American squad Black Swan Racing, Marc Lieb (Germany), Timothy Pappas (USA), Jeroen Bleekemolen (Netherlands) and Luca Stolz (Germany) sit on eighth place. Compete for honours in the premier A class at the Bathurst 12 Hour aside from Porsche are Audi, Bentley, BMW, Lamborghini, McLaren and Mercedes-AMG.

In the B class, Grove Motorsport leads the field with the 911 GT3 Cup shared by Ben Barker (Great Britain) and the Australians Stephen and Brenton Grove. Fourth place is held by the Carrera Cup Asia team with Paul Tresidder (Australia), Chris van der Drift (New Zealand) and Andrew Tang and Chen Yi-Fan from China.

Outside Australia, the event can be viewed live on the Internet on www.bathurst12hour.com.au. Dr Frank-Steffen Walliser, Vice President Motorsport and GT Cars: “After our big struggle in qualifying, we’re now going really well in the race. All four 911 GT3 R are running in the top ten. This is a tribute to the experience of our drivers who managed to keep out of any skirmishes during the chaotic early phase. We can’t quite match the pace of the fastest, but we’re very reliable and so far benefiting from our fuel consumption and tyre wear. The situation remains exciting. I’m sure we’ll have to wait until the last 30 minutes of the race to find out where we’ll end up.”

Sebastian Golz, Project Manager 911 GT3 R: “Our 911 GT3 R are experiencing no technical problems. We’re making good strategic use of the safety car phases. Everything is going according to plan.”
Mark Webber, Porsche ambassador: “Trying to make a prediction about this race is like reading tea leaves. The opening phase of the race was very hectic, luckily the 911 GT3 R came through unscathed. Now it’s important to continue without any mistakes and stay in the lead, then anything’s possible. The race outcome is anyone’s guess.”

Dirk Werner (911 GT3 R #911): “The start alone was pretty unusual. I’ve never started a race in the dark. And the fact that we practiced during the day here didn’t make things easier. Luckily the first safety car phase arrived quickly and by the time the race went back to green it was starting to get light. Still, the start was a great experience. We’ve done a good job of making up ground. Let’s see what else we can do in the second half of the race.”

Earl Bamber (911 GT3 R #991): “We took up the race from far down the field, however Laurens made a cracking start off the line and worked his way up to third place. Now we’re holding a steady course. If we can now to establish ourselves in the leading pack, then we’d have every chance in the final phase.”