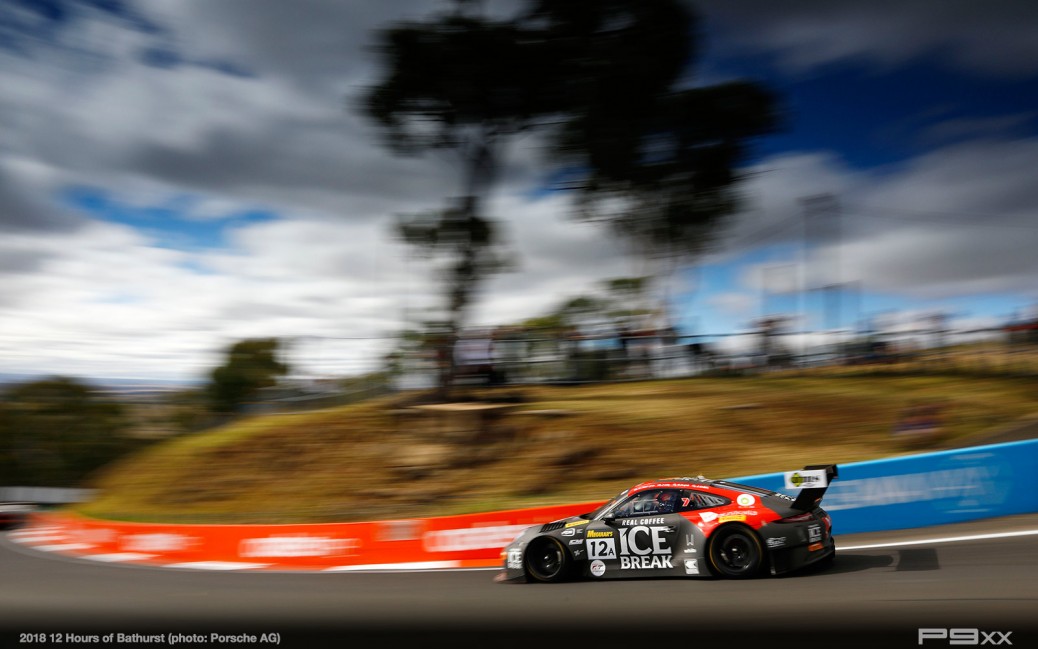 Stuttgart. Putting in a strong performance in qualifying for the 12-hour race at Bathurst/Australia, Porsche Young Professional Matt Campbell (Australia) secured a good starting position for his Competition Motorsports team. In the over 500-hp Porsche 911 GT3 R, designed in Weissach by Porsche Motorsport for worldwide GT3 series on the basis of the 911 GT3 RS production sports car, the local hero initially posted the fifth quickest qualifying time. In the Top 10 Shootout amongst the best, he then set the tenth fastest time and thus takes up the opening round of the Intercontinental GT Challenge on Sunday from the fifth grid row on the legendary 6.213-kilometre Mount Panorama Circuit. His teammates are Patrick Long (USA) as well as Australians David Calvert-Jones and Alex Davison. Last year, Matt Campbell scored second overall and won the Pro-Am class with this team.

Three other Porsche teams field the 911 GT3 R in the strongly supported 12-hour race on the storied racetrack at the foothills of the Blue Mountains in the state of New South Wales. The two-time Le Mans winner and reigning long distance world champion Earl Bamber (New Zealand), who shares the cockpit of the #991 Porsche campaigned by Craft Bamboo Racing with Laurens Vanthoor (Belgium) and Kévin Estre (France), claimed the 18th spot in qualifying. In the 911 GT3 R run by Black Swan Racing, Timothy Pappas (USA), Marc Lieb (Germany), Jeroen Bleekemolen (Netherlands) and Luca Stolz (Germany) secured the 25th spot. 26th on the grid is occupied by Romain Dumas (France), Dirk Werner (Germany) and Frédéric Makowiecki (France), who compete for Manthey-Racing.

After the 24-hour classics at Dubai and Daytona, the Bathurst 12 Hour is the third major endurance race of the season. The event is gaining in popularity from year to year and attracts more and more manufacturers from Europe. Lining up to contest the top A class aside from Porsche are Audi, Bentley, BMW, Lamborghini, McLaren and Mercedes-AMG. One of the peculiarities of the race is its unusual starting time: Traditionally, the field is sent on its 12-hour pursuit in the dark at 5.45 in the morning. Outside Australia, the event can be viewed live on the Internet on www.bathurst12hour.com.au. Qualifying quotes
Dr Frank-Steffen Walliser, Vice President Motorsport and GT Cars: “The two qualifying sessions didn’t run so well. Matt Campbell initially set P5, which demonstrated our speed. The fact that he made a slight error in the Top 10 Shootout doesn’t detract from his strong performance. It’s extremely tight amongst the frontrunners with 15 cars within a second. This shows just how close the competition is. Matt did such a great job and outlined the potential of the 911 GT3 R. Unfortunately, Earl Bamber only turned a few laps in the second qualifying. He made a tiny driving mistake which had immediate consequences on this track. As a result he wasn’t able to achieve a better time. It was even more difficult for Fred Makowiecki and so he’s even further down the field. Our teams will now focus fully on preparing for the race. They have a great deal of experience and I’m sure that they’ll manage to fight their way up the field over the 12 hours.”

Matt Campbell (911 GT3 R #12): “That was a very good qualifying for Competition Motorsports. To be the only Porsche squad to make it into the top 10 Shootout is a great achievement. Our 911 GT3 R is well balanced. We improved from one practice to the next on this difficult racetrack. Unfortunately I made a mistake early on in my shootout lap which cost me a lot of time and a better grid position. But this doesn’t affect our confidence for the race.”

Earl Bamber (911 GT3 R #991): “Unfortunately I went too wide, touched the wall and afterwards I had no chance to improve on my lap time. Our 911 GT3 R feels good and I think that we’ll be able to do more in the race tomorrow. I just feel a bit sorry for the boys in our team for the extra work I’ve caused them. I hope I can repay them for their hard work tomorrow.”

Frédéric Makowiecki (911 GT3 R #911): “Bathurst was new territory for me and my teammates. We’ve never raced on this very special track before. Luckily we managed to make good progress from the first practice to this qualifying. Our 911 GT3 R is running well, even though we lack a little performance. Still, we’re all looking forward to this unique race.”

Jeroen Bleekemolen (911 GT3 R #540): “We’re not unhappy. In the USA we always have to leave the pits on cold tyres. Here, we’re allowed to pre-heat them so we were a little off with the tyre pressure. It wasn’t perfect. Otherwise, our car ran very well on this racetrack. We all have a good feeling and we’re looking forward to the race.”