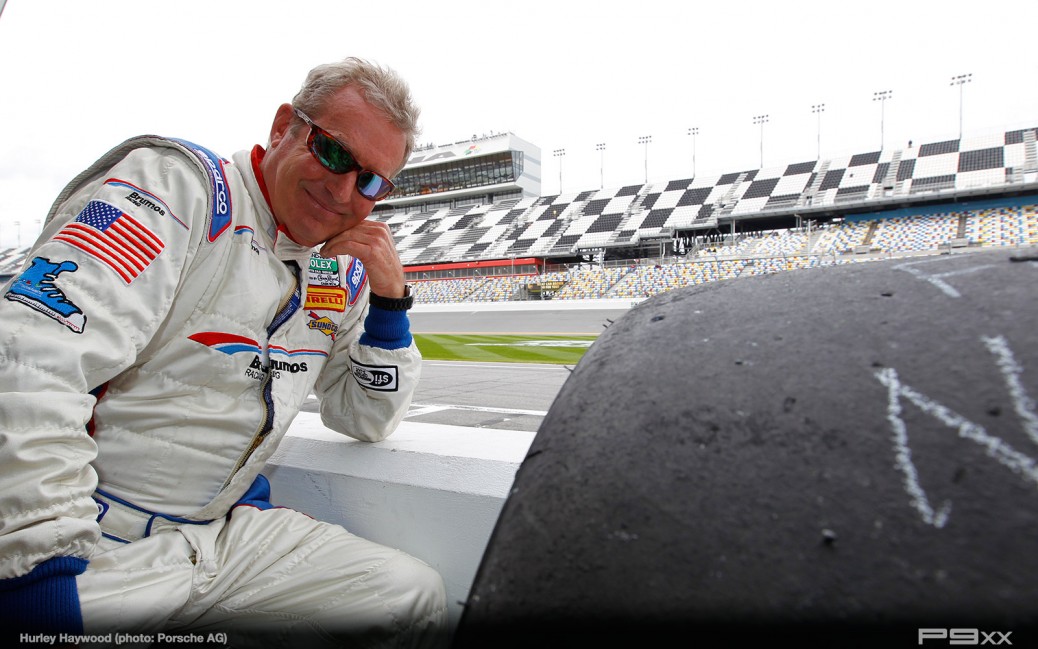 Atlanta, Georgia. Porsche congratulates one of its most decorated ambassadors, Hurley Haywood, on a shared anniversary: The five-time Rolex 24 Hours of Daytona winner turns 70 today, just a month before the 70th birthday of the first Porsche sports car.

Born in Chicago, Harris Hurley Haywood is the most accomplished American endurance racer of all time. With multiple overall victories at the 24 Hours of Le Mans, Rolex 24 Hours of Daytona and 12 Hours of Sebring, Haywood cemented his winning reputation over four decades of competition.

Endurance race victories came in both GT racing cars and Prototypes in a career that spanned from 1969 to 2012, with a brief hiatus for a tour of duty in Vietnam in 1970. His first overall endurance victory came at the 1973 Rolex 24 Hours of Daytona, co-driving with Peter Gregg, then owner of Brumos Porsche. The pair followed with another victory just one month later at the 12 Hours of Sebring. Haywood would ultimately become vice president and co-owner of the Brumos Porsche dealership in Jacksonville, Florida. While driving with or for Porsche most of the time, he was sidetracked by a bad crash in 1983 at Canadian Tire Motorsport Park (Mosport) that put his left leg in a cast for two years. Haywood was able to continue racing while recovering by joining Bob Tullius’s Group 44 Racing team, first in prototype Jaguars that utilized a semi-clutchles Hewland transmission allowing Haywood to continue to compete, and then in the Group 44 Audi Quattro which led to a 1988 Trans Am championship. Haywood was back to racing in a Porsche by 1986 and secured the 1991 IMSA Supercar Championship in a 911 Turbo.

“As we prepare to celebrate 70 years of Porsche sports cars on June 8, I do not believe the similar anniversaries are by coincidence,” said Klaus Zellmer, President and CEO of Porsche Cars North America. “In recognition of his remarkable achievements and daily contributions he continues to make to our brand, it is important that all of us at Porsche congratulate Hurley and wish him a very happy 70th birthday.”

Giving back to the sport, Haywood has been instrumental in the Porsche Young Driver Academy by teaching and mentoring young drivers early in their careers. He is also the namesake of the IMSA Hurley Haywood GT3 Cup Scholarship for up-and-coming GT drivers.

Hurley has been a featured guest at all five previous Porsche Rennsport Reunions, and will attend the upcoming Rennsport Reunion VI this September 27-30, 2018 at WeatherTech Raceway Laguna Seca. Haywood has been the Chief Driving Instructor for the Porsche Sport Driving School in Birmingham, Alabama since 1999 and currently resides in St. Augustine, Florida.

As Porsche prepares to celebrate its own anniversary of 70 years of sports cars, it is easy to see why the name Hurley Haywood and Porsche have been synonymous for nearly five decades.

About Rennsport Reunion VI
The largest Porsche festival in the world, Rennsport Reunion has become a U.S. tradition every few years since 2001. This year’s Rennsport Reunion VI will bring together tens of thousands of enthusiasts for an extraordinary gathering of significant Porsche racecars, as well as those who have designed, engineered, and driven them. Hosted by Porsche Cars North America, the four-day program of on-track competition will return to the storied WeatherTech Raceway Laguna Seca on California’s Monetary Peninsula from September 27-30.