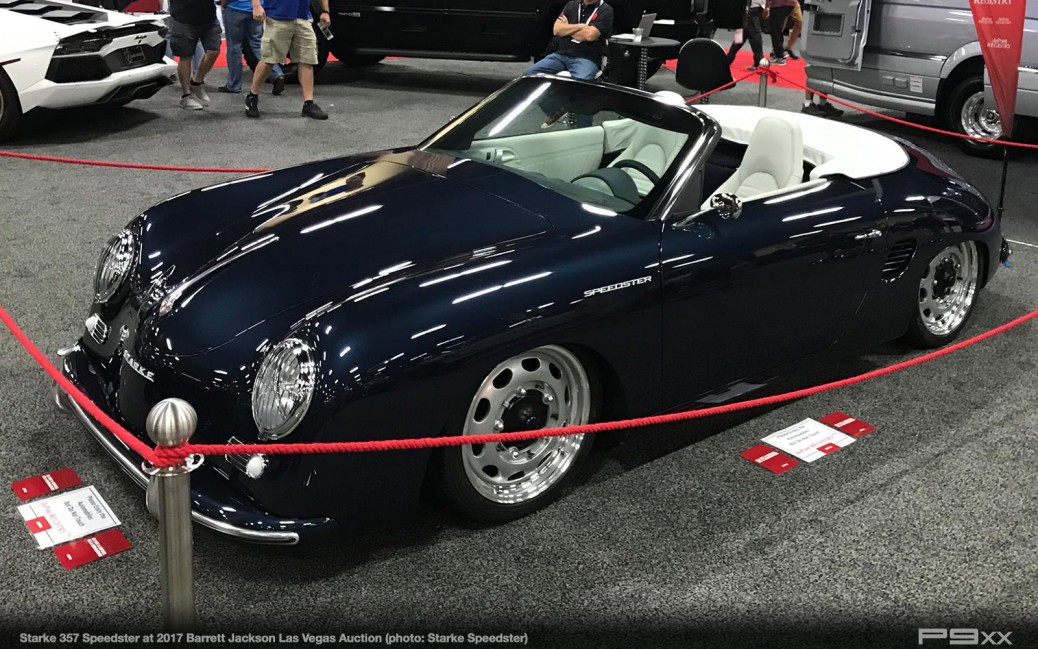 Porsche 356 replicas seemed to be an underlying theme last week at Barrett-Jackson’s Las Vegas Auction. No less than three traditional Speedsters were included in the bidding, as was the one-off 987-based build by West Coast Customs. Not on sale, but making its world debut and also based on Boxster underpinnings, was the much anticipated Starke 357 Speedster.

Up until now, those keen on following the company aiming to build turn-key Speedsters built on 987 or 987.5 donors were mainly limited to CGI renderings and claims by the upstart Arizona-based company with eyes on revolutionizing the 356 replica game. This week, thanks in part to the Dupont Registry, we now have faces to go with the name… notably a finished Starke Speedster prototype as presented by the father and son company founders Wade and Max Morrison.

There’s part of us that wonders if the Morrisons and/or anyone from West Coast Customs wandered over to the other’s car with the sort of grin any girl wearing the same dress might giver her rival at the any prom in Anytown, USA.

All kidding aside, both builds offer an interesting take on pairing a classic design with a new chassis. Given the size differences of the 987/987.5 as compared with the vintage 356, the job would be an easy task for neither, and yet both seem to have captured the spirit with more than the fair share of grace you might expect in such a process. Purists will still grouse, but the sale price of the one-off West Coast Customs car north of $300,000 suggests they may be on to something.

Thanks to to the Starke Speedster and Dupont Registry collaboration at Barrett-Jackson Las Vegas, we now have real life photos of this particular build. In this case, it appears more of the original footprint of the Boxster is retained, and frankly it appears to be more replicable as has been the admitted plan of Starke Speedster in the first place.

During the presentation posted by Starke to their Facebook page and also embedded above, Wade Morrison confirms that they aim to begin production of their cars in December. According to research we did for our previous story on the Starke Speedster project, customers will be able to choose their donor from the 986/987/987.5 range of production, meaning manual transmission should you prefer, or anything from a sub $10K donor to a more latest and greatest PDK and direct injection equipped Boxster S.

Check out more on the Starke Speedster at their website HERE.