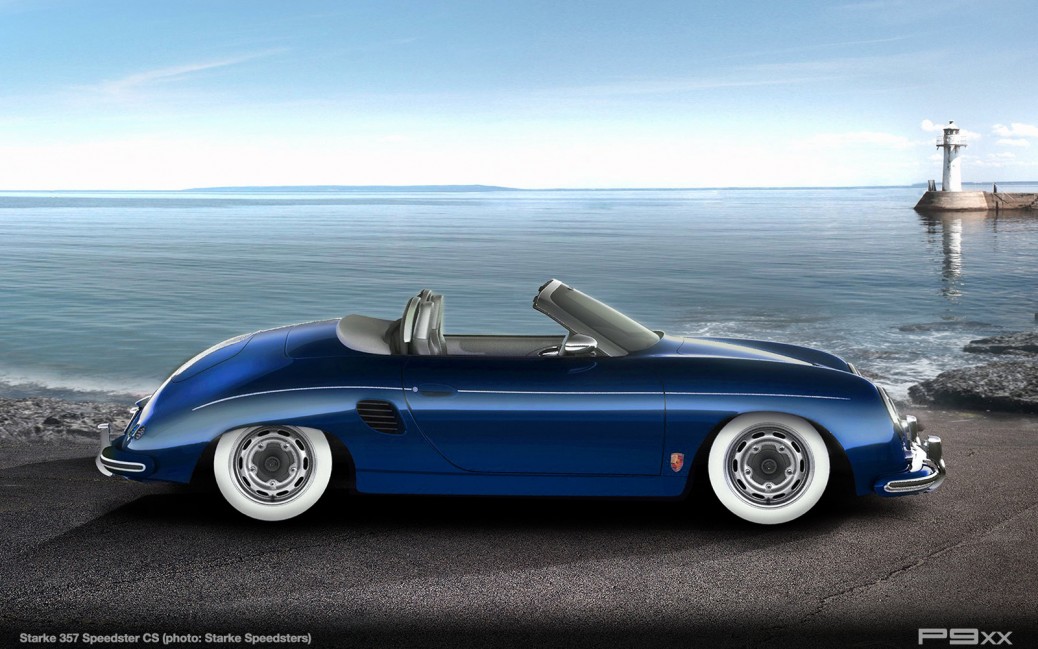 There’s little doubt that, at least in the world of replica cars, the Porsche 356 Speedster is a land of plentiful choices. Yes, they may range from a well-executed Beck Speedster to a bubble arched Franken-bathtub taking more than its fair share of liberties with the lithe original form of a Porsche icon. Where then a car like the Boxster-based Starke 357 Speedster fits in remains to be seen.

Though original Speedster replicas may vary, they all sort of do the same thing by combining lightweight fiberglass bodywork with a more plentifully sourced Volkswagen pan. That’s an effective method to create an affordable recreation of an icon, but even the most lavishly built Speedster replicas heretofore haven’t been particularly lavish in their amenities. As the car industry has changed over the last few decades since Speedster replicas first hit the scene, comforts such as air conditioning, navigation, bluetooth, let alone safety crash structures are begin to take higher priority for customers… at least that’s what the folks at Arizona-based Speedster builder Starke aim to prove with their new 357. Rather than starting with a VW pan, a customer seeking to build a Starke 357 Speedster will need to start with a 1998-2012 Boxster… so anything from the 986, 987 or 987.2 variety. Given the range, that means pricing that begins in the sub $10K range for an early 986, and up to a 320-hp direct injection 3.4-liter flat six with manual or dual clutch PDK should your budget allow it.

Unlike the old world of 356 replicas, Starke takes a more wholistic and Singeresque approach to its builds. Each one is crafted in the firm’s Arizona-based facility, and for now there’s a backlog measured in months. Starke offers three different flavors of Speedster, the more classic CS, the more edgy RS, or the more aggressive Outlaw. From there, you’ll pick paint and other details like their rendered car’s plaid seat interior.

If you’re thinking this car reminds you of that Boxster-based 356 build West Coast Customs did recently for Justin Bieber, you’re not the only one. Like the original Speedster replica industry, a marketable idea is often measured by the amount of direct competition it creates in its wake. In this case, you don’t need to be Justin Bieber to get one. As for the design, all we have to work on right now are these renderings. Based on those, the overall shape is surprisingly true to the original Speedster form from what we can tell. The big intakes on the side are one obvious detail you wouldn’t see on a real Speedster, and the windshield is too upright. For a car attempting to go so retro, those headlights are also unnecessarily complex looking, much less their angel eye LED light signature. This car is doubtful to leave Porschephiles guessing in real life, because the Boxster is such a fundamentally larger vehicle than the 356. You simply can’t hide that sort of mass when viewed without the filter of a computer rendering.

Given the breadth of the range of Boxster that can be sourced, we’d love to see them take more liberties with the parts bin or donor offerings. While it’d be tragic to turn a Boxster Spyder into one of these given the Spyder’s rarity, the car’s lower and more raked windshield would aesthetically help the design of the car. Adding in other elements from this era car, things like color-matched center console, wouldn’t make it any more 356-like, but may help give it more of a raw Speedster-like feel. At the end of the day, we suspect these cars will appeal more toward a certain demographic seeking a play to nostalgia than anyone actually trying to build a truly authentic replica. Even still, it’s a great way to put a fresh retro face on a more tired old Boxster, something that’s in much more plentiful supply than say a 964 on which the aforementioned Singer is based.

Check out more on Starke Speedster at their website HERE. Also see more photos of the car in our photo gallery archive HERE.