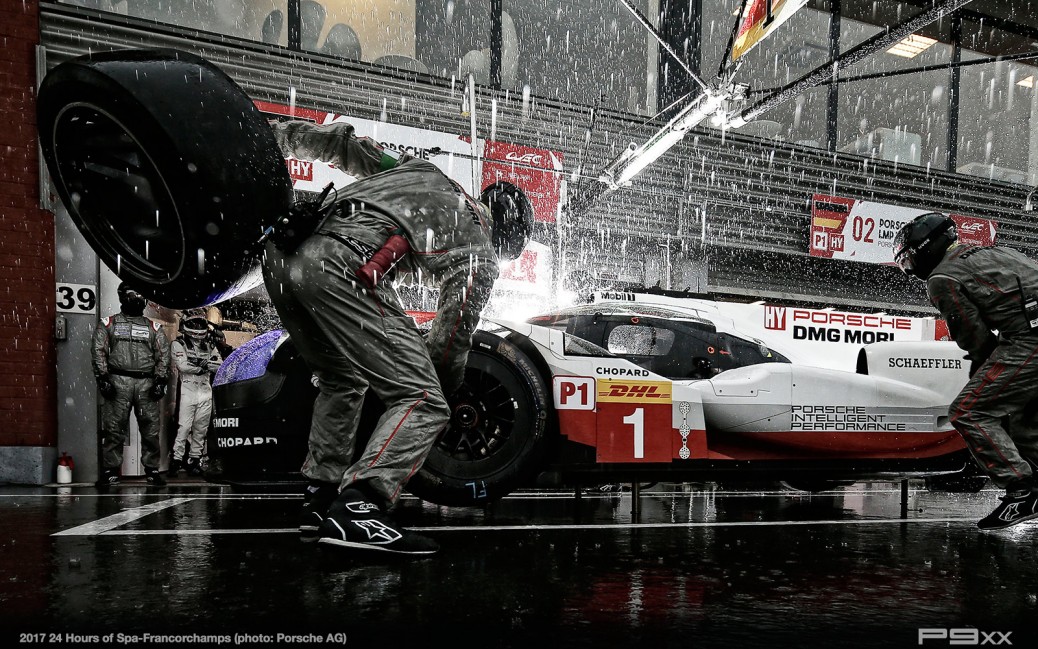 Stuttgart. Porsche faces the seventh of nine rounds of the FIA World Endurance Championship (WEC) with special excitement: The race on the Fuji International Speedway at the foot of Japan’s highest mountain could bring an early title decision on October 15. Featuring a 1.5 kilometre long straight, the track rightly deserves its last name of “Speedway”. Depending on their aerodynamic configuration, Toyota’s and/or Porsche’s Le Mans prototypes may crack the 300 kph barrier. The tight and twisting remainder of the lap makes set-up work challenging and requires tricky compromises. The weather in the area of Fuji-san’s perfectly shaped, 3,776 metres high volcano can be a mild late summer climate or unpredictable autumn weather.

Should championship leaders Earl Bamber (NZ), Timo Bernhard (DE) and Brendon Hartley (NZ) bring home their Porsche 919 Hybrid ahead of the best placed Toyota drivers, they will become the new drivers’ world champions. They have scored 159 championship points and are followed by Kazuki Nakajima (JP) and Sébastien Buemi (CH) having 108 points each. The trio of the second Porsche 919 Hybrid, reigning world champion Neel Jani (CH), André Lotterer (DE) and Nick Tandy (GB), currently rank fourth with a score of 83 points. If Porsche manages this season’s fourth one-two victory, the company would win the manufacturers’ world championship for the third time in a row. However, it is not Porsche but Toyota who is the odds-on favourite on home soil. After six of nine WEC rounds, Porsche has 242 points, Toyota 168.5 points.

Fritz Enzinger, Vice President LMP1, is not a fan of such “if” possibilities: “Arithmetic doesn’t help anything in a six-hour race. The long straight in Fuji will challenge our engines to the end and lapping traffic in the winding parts of the circuit is a permanent high risk. We are on track to defend both our championship titles again and should keep our head down. So far the Porsche 919 Hybrid has taken the chequered flag 59 times out of 64 possible cases. Getting over the distance always is key.”

The race in Japan will start on Sunday at 11 am local time and will be broadcast worldwide on the internet and television.

The Porsche 919 Hybrid
The class 1 Le Mans Prototype (LMP1) develops a system power of around 900 HP (662 kW) that comes from a compact two-litre turbo charged V4-cylinder (nearly 500 HP/368 kW) engine and two different energy recovery systems – brake energy from the front axle combined with exhaust energy. The combustion engine drives the rear axle while the electro motor boosts the front axle with an output of more than 400 HP (294 kW). The electrical energy that comes from the front brakes and the exhaust system is temporarily stored in a liquid-cooled lithium ion battery.

The Porsche LMP Team before the race in Japan

Team Principal Andreas Seidl: “In terms of aerodynamics, Fuji Speedway requires contradicting qualities of a race car. 1.5 of the 4.5 kilometre long lap is simply straight on and asks for minimum drag. But the 16 corners require downforce. The regulations allow for two aero kits per season: One is the low-drag Le Mans package and the other one is the high downforce kit. We have carefully analysed data and simulations and have decided to go for our high downforce kit. Within the prescribed possibilities, we will tune it towards medium downforce.”

Neel Jani (33, Switzerland): “Our first 2017 Asia round will be a very difficult one. Most recently in Austin, Toyota was very strong again, and traditionally they tend to go well in their home race. I think they will be faster than us on the straight. In 2016 lap times were extremely close in qualifying and in the Fuji race. After six hours we had the prototypes of three manufactures reaching the finish line within 17 seconds. On another topic: To view Mount Fuji from the track is just beautiful.”

André Lotterer (35, Germany): “In 2003 I had a life changing experience in Fuji. Back then I did a Formula Nippon test and after that stayed for three years, living in Gotemba. Today I still race Japanese Super Formula and have a home in Tokyo. I like Japan a lot and so was delighted when Fuji was included in the WEC calendar for 2012. The fans are great and have an absolutely outstanding knowledge. Fuji Speedway is a great track, embedded in a terrific landscape. I especially like the circuit’s fast corners two and three. Unfortunately I haven’t won a race there yet in a LMP1. It’s now time to get that changed.”

Nick Tandy (32, Great Britain): “To me the Fuji race track is an iconic circuit and Japan has such a huge motorsport heritage, this round is always a very important event in the world championship. Obviously the fans are also very enthusiastic and come out in big numbers. I also hope we have a lot of support due to having a ‘local hero’ with André in our car.”

Earl Bamber (27, New Zealand): “I have mixed memories of Fuji. In 2014, I won both Carrera Cup Asia races there but in the 2015 WEC race, I was taken out by an Audi. However, I definitely enjoy racing in Japan and I’m a big fan of the Japanese culture. I think we face a tough weekend with strong competition from Toyota and a lot depends on the balancing act between high and low downforce. My favourite corner of the Fuji International Speedway is the long right hander 100 R in the middle sector.”

Timo Bernhard (36, Germany): “The motorsport culture in Japan and the fan’s expertize is amazing. We often get small gifts which I like. On track it will be a tough fight with Toyota and it will be exciting to see which car concept proves to be best there and who manages the better compromise for the track’s various requirements. Sectors one and two are really fast. The start-finish-straight is the longest of the season and the downhill part after corner six also goes flat. But in sector three you have a series of narrow corners that are inter-connected. This sector is also the crucial one when it comes to tyre wear.”

Brendon Hartley (27, New Zealand): “We all love returning to Japan. Toyota won last year and I have the feeling they will again be strong at their home race. We will have to give it everything we have got to take home a fifth win of the season.”

– The WEC races can be followed on various international TV channels in Europe, Asia, Australia and New Zealand, North and South America as well as in the Middle East and Africa.

Facts and figures:
– The WEC efficiency regulations limit the amount of energy that can be used per lap. On the 4.56 kilometres long lap of the Fuji International Speedway, the Porsche 919 Hybrid can use 4.15 megajoule of electrical power from energy recovery systems and 1.163 kg/1.606 litres of petrol.

– At normal race speed, the 919 Hybrid is due for refuelling after 37 laps.

– Refuelling and changing tyres may only be done sequentially, not at the same time. Only four mechanics may work simultaneously when changing tyres and also may use only one wheel gun at a time. That takes a lot longer than in F1, for example.

– The drivers are normally only changed when new tyres are needed.

– These different types of tyres can be used: three different compounds of slick tyres for dry conditions, a hybrid tyre (no profile either but softer cover) for mixed conditions and wet weather tyres. Four sets of dry weather tyres are available per car for qualifying and the race, this is two sets less than in 2016.

– A lap on the Speedway has ten right handers and six left handers.

– The circuit opened in 1966 and had a reputation of being dangerous until its modernisation in 2005. In 1976 and 1977 it was the venue of the Japanese Formula One Grand Prix. In 1976 Niki Lauda gave up in heavy rain, James Hunt becoming world champion. One year later saw a terrible accident. Only in 2007 and 2008 did Formula One return again racing at the new track.

– Mount Fuji is an active volcano that last erupted in 1707. It is the highest mountain in Japan at 3,776 metres and is regarded as a holy mountain.

– The circuit is located about 100 kilometres southwest of the capital of Tokyo on the Japanese main island of Honshu.

Review:
– In the 2016 qualifying, Timo Bernhard and Mark Webber came second. The Australian had chosen this weekend to declare he would step back from his professional driver career at the end of the season. The average time of their fastest lap in the 919 Hybrid was 1:23.595 minutes. Neel Jani and Marc Lieb (DE) qualified sixth with the sister car (average 1:24.134 minutes). The overall fastest qualifying lap was achieved by Kamui Kobayashi in his Toyota (1:23.239 minutes). Pole position went to Audi with an average time of 1:23.570 minutes.

– Bernhard/Hartley/Webber finished third in what was an extremely exciting race. Dumas/Jani/Lieb, the 2016 world champions, finished fifth. Race winners after a distance of 244 laps on a consistently dry track with ambient temperatures of 20 degree Celsius were Toyota drivers Mike Conway, Kamui Kobayashi and Stéphane Sarrazin.