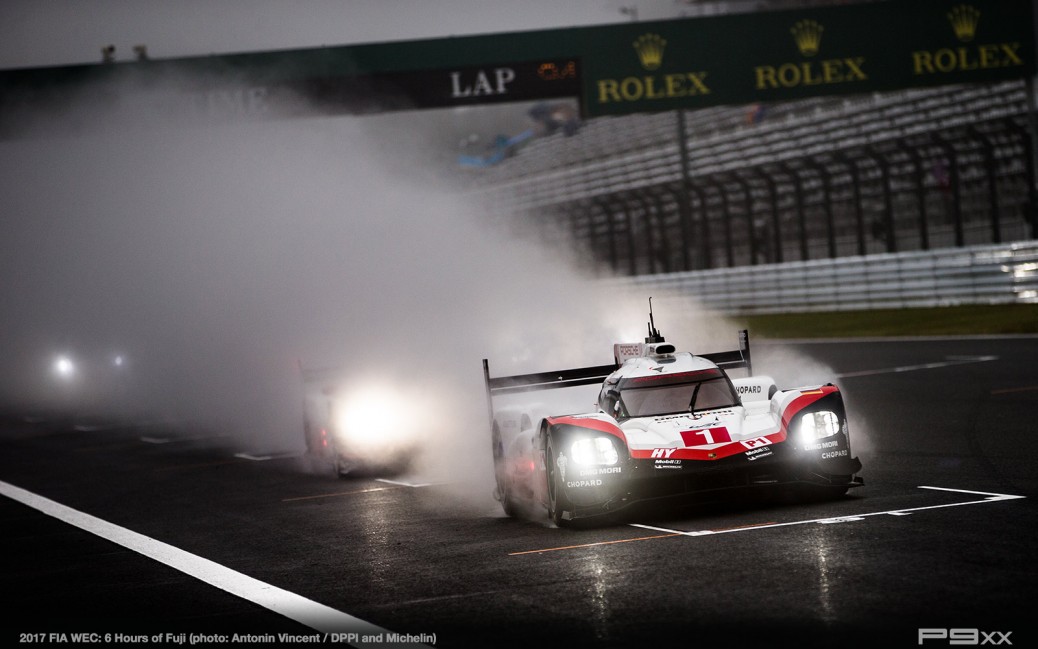 Stuttgart. Just in time for the appearance of the FIA World Endurance Championship (WEC), the summer said goodbye to the Japanese Alps. After a 15 degree Celsius drop in temperature over a few hours, the seventh of nine world championship rounds is set to be held in persistently wet conditions. The first two 90-minute practice sessions at the 4.56 kilometre long Fuji International Speedway took place in the rain in just 13 degree air and 17 degree track temperatures. The picturesque silhouette of Mount Fuji disappeared in fog while the spray on the very long 1.5-kilometre straight left the drivers with extremely poor visibility.

The two Porsche 919 Hybrids were fastest in the morning practice session with the trio of Neel Jani (CH), André Lotterer (DE) and Nick Tandy (GB) ahead of the sister car of the championship leaders Earl Bamber (NZ), Timo Bernhard (DE) and Brendon Hartley (NZ). The afternoon session was red flagged for a long time because of heavy rain. On the time sheets, Jani was second fastest, Bernhard was fourth. Their teammates didn’t even get the opportunity to drive. The overall best time of the day was achieved by Lotterer in the morning with a lap of 1:35.527 minutes.

The six-hour race is awaited with huge excitement but not only because of the difficult conditions: If the Le Mans winners Bamber/Bernhard/Hartley finish the race ahead of the best placed Toyota (car number 8), they would become the new drivers’ world champions. However, next on the programme is qualifying on Saturday from 15:00 to 15:20 hrs local time. The six-hour race on Sunday will start at 11:00 hrs local time.

Andreas Seidl, Team Principal: “This wasn’t an easy Friday. Due to the weather conditions we obviously could not tick off our usual job list. Nevertheless, both cars ran without any issues and we gathered some information on the wet track which might be useful given how the weather is predicted for the weekend. The most important thing actually on such a day is to have both cars back in the garage in one piece.”

Drivers Porsche 919 Hybrid car number 1:
Neel Jani (33, Switzerland): “I did a couple of laps in the second free practice session but there was quite a lot of standing water and aquaplaning on the track. It doesn’t make sense to take risks in a practice session. If it was the race, we would stop anyway with such heavy rain. The morning session was a bit more useful and we now have to look how the weekend proceeds.”

André Lotterer (35, Germany): “Luckily the track conditions in the first practice session were quite consistent. The car felt basically good and we could focus on fine tuning to improve traction. This goes for the management of the combustion engine that drives the rear axle as well as for the electrical power from the two energy recovery systems and the interaction of all the systems to accelerate as strong as possible out of the corners. We also worked on the car’s balance for wet conditions. Unfortunately in the afternoon session, we had just too much rain to work properly. Especially when it is as cold as today, the tyres cannot work properly and it is really difficult to drive.”

Nick Tandy (32, Great Britain): “It looks as if it will be wet all weekend so it is important to get some practice. Not just to get the car correct but also the drivers need running in the rain. It is the first time here with the Porsche 919 Hybrid for me but I have raced other cars here in the dry and in the wet. I tried to get used to where the water was standing and where it dries out quickly for example.”

Drivers Porsche 919 Hybrid car number 2
Earl Bamber (27, New Zealand): “As soon as I got into the car this morning I had a good feeling. At the beginning, there was a lot of aquaplaning but then it reduced. When there are a lot of cars running, the water is moved off the track and it is not too bad. I think in damp conditions we are strong and in the afternoon Toyota looked formidable in heavy rain. So we have to improve on this. I think it is great to be back here. I like Japan and the Fuji Speedway a lot although I still try to find the mountain this year!”

Timo Bernhard (36, Germany): “I joined the second session a little later. I wanted to do a single fast lap to check the line, but there was already too much water on the track and I had a big moment with aquaplaning. That’s why I went straight back to the pits, we didn’t want to take risks. There wasn’t much to learn in this session except that it’s better not to drive a prototype in those conditions.”

Brendon Hartley (27, New Zealand): “It is nice to be back here on the track at Mount Fuji. It was very wet today and quite slippery. The first session went fine and we clocked the first and second fastest times. In free practice two, the Toyota looked a bit quicker in heavier rain though. Now we will work on our car set-up.”

TV and live streaming:
– The official WEC App can be downloaded free of charge with an extended (not free of charge) version available which includes full live streaming and full timing. The live stream is voiced by the FIA WEC TV team including live interviews from the pits.
– The WEC races can be followed on various international TV channels in Europe, Asia, Australia and New Zealand, North and South America as well as in the Middle East and Africa. Details at http://preview.tinyurl.com/y994hbo5