Roar Before the Rolex 24: Day 2 Report 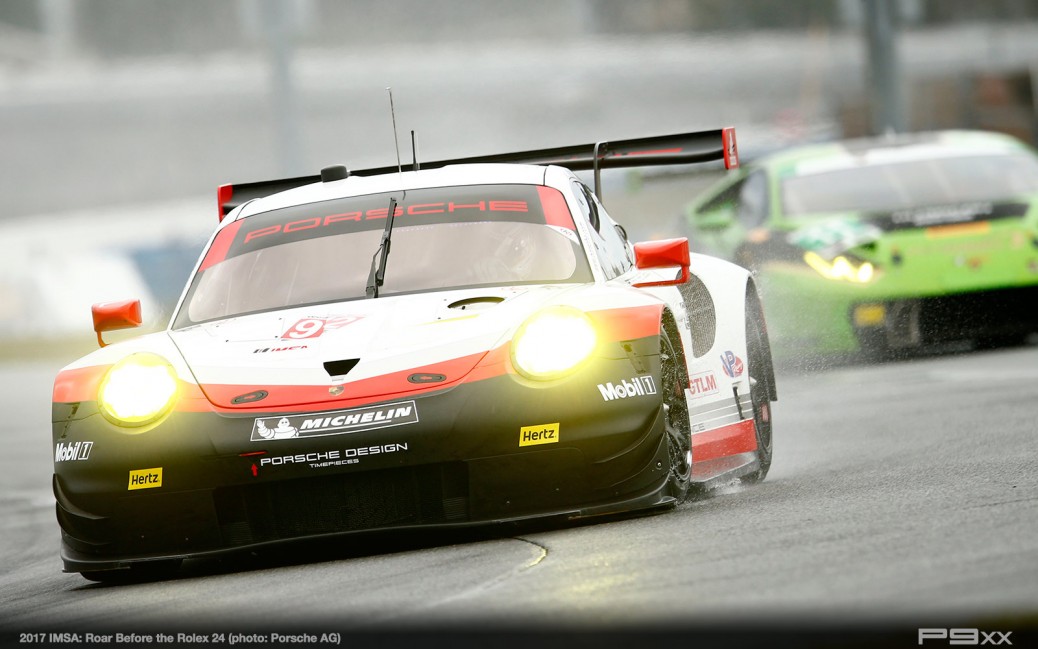 Stuttgart. The setup of the new Porsche 911 RSR for the 24 Hours of Daytona was again the main priority for the factory team Porsche GT Team on day two of “The Roar before the Rolex 24”. The long distance classic on the Daytona International Speedway on 28/29 January marks the start of the 2017 IMSA SportsCar Championship, the most important sports car championship in North America. Five Porsche customer teams also used the official test at the Daytona International Speedway to prepare for the upcoming season. They will tackle the GTD class with the Porsche 911 GT3 R, which was designed for worldwide GT3 series on the basis of the 911 GT3 RS production sports car. After a severe thunderstorm during the night, the racetrack was still wet on Saturday when the teams took up the first practice session under cloudy skies. The weather did not improve. In fact, strong winds accompanied the occasional showers and the spring temperatures from the previous day plummeted to ten degrees Celsius. Only over the course of the second session of the day did the rain stop and the track dry up. However, the Porsche GT Team made the most of the changeable weather conditions. The new Porsche 911 RSR, which celebrates its race debut at the Daytona 24 Hours, has conducted very few tests on a wet track. In this respect, day two of “The Roar before the Rolex 24” may not have been particularly fun for the fans, but for the Porsche engineers the three Saturday sessions yielded new and important insights. Sharing driving duties in the 911 RSR with the starting number 911 were again the Frenchmen Patrick Pilet and Frédéric Makowiecki with the new Porsche works driver Dirk Werner (Germany). The second 911 RSR (#912) was manned by Kévin Estre (France), Porsche newcomer Laurens Vanthoor (Belgium) and Richard Lietz (Austria). These pairings represent the driver lineups for both the 24 Hours of Daytona as well as the second long distance classic of the IMSA SportsCar Championship, the 12 Hours of Sebring contested on 18 March. Their works driver colleagues Wolf Henzler (Germany/TRG), Jörg Bergmeister (Germany/Park Place Motorsports), Patrick Long (USA/Core Autosport), Michael Christensen (Denmark/Alegra Motorsports) and Sven Müller (Germany/Manthey Racing) will complete the official Daytona test in the 911 GT3 R of Porsche customer teams, for whom they will also contest the 24-hour race.

Marco Ujhasi, Overall Project Leader GT Works Motorsport: “For us today, it was particularly interesting to see how the 911 RSR performs in wet conditions. We’re running a new specification of wet tyre which worked perfectly and with which we found a good balance. We were fast in the rain as well. Eventually the track dried up and we were able to draw important conclusions. Only at the very end did we experience very cool temperatures and a dry circuit. These were precisely the conditions we had hoped for today. The point of such pre-tests is to gain as many insights as possible so that we’re optimally prepared for the race.”

Patrick Pilet (Porsche 911 RSR, No. 911): “The new 911 RSR feels good. I had a lot of confidence in the car right from the start. The big uncertainty today was the weather. But we’ve seen that, like in previous years, we’re fast in the rain too. For a successful season it’s very important to have a good car for all conditions.”

Dirk Werner (Porsche 911 RSR, No. 911): “The 911 RSR is a new car for me so I have to first get used to it. My feeling is that it’s a pretty good-natured race car. It’s not hard to drive, which for me is a sign that a great deal was done right in its development. We have a lot of downforce and the grip level is great.”

Frédéric Makowiecki (Porsche 911 RSR, No. 911): “The new car has a completely different character compared to its predecessor. Much has been improved. We have more downforce and a better seating position. In fact, many of our requests have been incorporated into the cockpit. In any case, I feel very comfortable. But you mustn’t forget that it’s still early days with the 911 RSR and there are still things that need improving. Nevertheless, even at this stage, we can be very pleased with the first real comparison against the opposition.”

Laurens Vanthoor (Porsche 911 RSR, No. 912): “Obviously I still have to get to know the car better, but it already feels very good to me. My teammates have contributed to the development and they know it inside out. I’m not at that stage yet but I’m already impressed with how well it performs.”

Kèvin Estre (Porsche 911 RSR, No. 912): “The new 911 RSR is not as hard to drive. The improved weight distribution makes things much easier, and a lot has been done to make us drivers feel more comfortable in the cockpit. We’re still looking for the perfect setup for Daytona. Thanks to the engine now positioned much more to the front and the larger diffuser, the new 911 RSR is more stable on the brakes and in fast corners than its predecessor.”

Richard Lietz (Porsche 911 RSR, No. 912): “The first direct comparison of a new car with the competition is interesting for every driver and engineer. After every session we discuss what we’ve noticed on the track and how the car handled. From this we draw our conclusions. We’re very pleased with the 911 RSR and we already know that we’ve taken the right direction with its development. As a driver I’m very happy with the much improved ergonomics. This makes double stints easier and more comfortable. Because the car is not so tough on the tyres it’s also better to drive over the distance.”