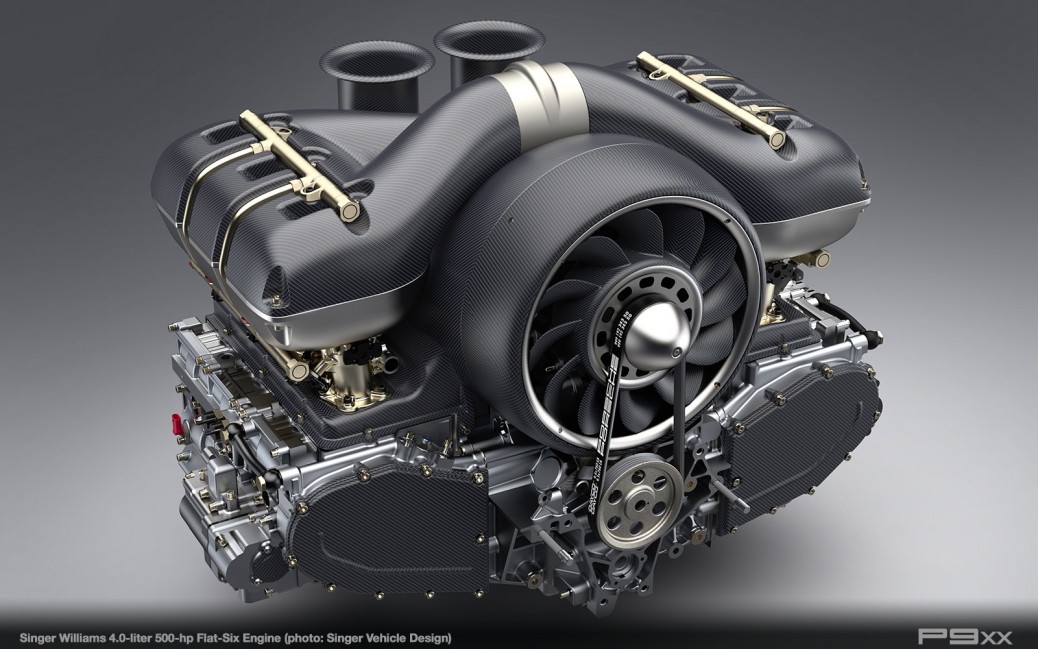 They say imitation is the most sincere form of flattery. In the Porsche world then, perhaps no one should feel so flattered as Singer Vehicle Design. While the wildly successful Porsche 911 re-imagineering firm maintains a wait list of buyers measured in years for its tailored and highly sorted 911 builds that often cost over half a million dollars, there are any number of companies seeking to get in on the action… some with “cheap” knockoffs, and some with serious bonafides and engineering such as Ruf’s most recent carbon fiber tubbed reinvention of the vaunted Yellowbird.

It might be easy then for Rob Dickinson and his California-based firm to fear the sharks circling and hole up, though Singer never seems to do what’s easy. No, they do what’s hard, in this case they do it in the form of teaming up with Williams Advanced Engineering (ergo Singer F1) to develop the ultimate naturally aspirated flat six. As if that wasn’t enough, they also brought on famed Porsche engineer Hans Mezger as a technical consultant. Bar raised. According to Singer’s press release on the subject (full copy below this story), the project began at the behest of three of the company’s clients. The idea was to both drop weight and also raise performance to a new and highly impressive level… not just in the form of this engine, but apparently also a range of developments that Singer promises to fully reveal in September.

Work with Williams Advanced Engineering began in earnest, with this engine being the first product of the collaboration. It would seem the design of the engine itself is considerably more beautiful, befitting the diamond stitched leather engine compartments Singer’s reimagined 911s are known for. The engine’s not just a pretty bauble though, not by a long shot. This is Singer after all, and Williams. This modern air-cooled flat six gets interesting modern tech in order to boost performance. With 4.0-liter displacement, the mill also gets four valves per cylinder, four cam shafts, dual oil circuits, titanium con rods, aluminum throttle bodies with carbon fiber trumpets, upper and lower injectors, carbon fiber air box with multi-stage resonator, titanium exhaust, an optimized (and beautiful) enlarged cooling fan, ram air induction through trick rear window based intakes, and as much additional lightweight titanium, magnesium and carbon fiber as they could add in order to drop critical weight. All of this combines for an engine output no less than 500 hp. First to get the new engine and Singer’s other unnamed Williams collaborated developments will be Scott Blattner. The man’s a longtime Singer client, with two coupes and most recently a Targa that he ran at Goodwood last year. His next Singer is based on a a 1990 964, and will be the most extreme as the prototype build for all of this new kit.

Timing on the announcement of the new engine is interesting. Other than the September reference, there’s no confirmation of any earlier showing of the engine. It’s hard to forget though that next week is Monterey Car Week, a series of fantastic automotive events where Singer is known to have a strong showing. P9xx will be on the ground in Monterey next week and will endeavour to provide coverage should this engine make a showing.

LOS ANGELES, CA– Singer Vehicle Design announces details of a new level of restoration and modification services commissioned by three of its clients for their air-cooled Porsche 911s. To meet the high-performance and light-weighting goals required for the restorations, Singer has undertaken a performance research study with Williams Advanced Engineering, part of Williams Grand Prix Engineering Group, and engaged the celebrated motorsports concern to engineer technical modifications and components for these restored and reimagined Porsche 911s.

The first fruit of this work is a modified, naturally aspirated, air-cooled, flat-six Porsche 911 engine with a 4.0L capacity, four-valves per cylinder and four cam-shafts, rated at 500HP.

The engine benefits from the additional insight and vast experience of famed engine designer and engineer, Hans Mezger, who is a technical consultant to the project.

The engine will power a 1990 Porsche 911 currently being restored for long-term Singer client, Scott Blattner.

The full spectrum of the enhancements provided by Williams Advanced Engineering and other technical partners will be unveiled in Scott’s restored, reimagined and reborn Porsche 911 in September.

Beginning with the Mezger-designed Porsche 3.6L engine from the 1990 911, the resulting specification is as follows:

As ever, Singer’s work is motivated by the desire to understand the perspectives and requirements of its clients and to present them uniquely personal restoration and modification services – always guided by the philosophy:  Everything is Important.

Rob Dickinson, Founder of Singer Vehicle Design, explained: “Helping our clients realize their unique vision for a reimagined Porsche 911 with the help of automotive royalty is very much a privilege. Singer is delighted to be working with Williams Advanced Engineering and Hans Mezger to offer our clients a “next level” of restoration and modification services for their Porsche 911s.  With careful and dedicated development, this iconic air-cooled engine has much to give both its existing devotees and a generation of new enthusiasts.”

Dickinson stated that the full culmination of this exciting work with Williams and other technical partners will be revealed shortly and will represent a stand-alone selection of restoration and modification services strongly oriented towards light-weighting and dynamic gains.

Jonathan Williams, Williams Heritage Director, noted further: “The Porsche 911 has long been a standard bearer in the worlds of racing and advanced engineering – two things that we care deeply about at Williams. As an admirer of the 911, I’m thrilled that we’re working with Singer and its clients on these restorations.”

Singer client and commissioning owner, Scott Blattner, provided additional context saying: “My journey with Singer Vehicle Design began with the restoration of two coupes. In 2016 these were joined by my Targa, which recently ran in the famous Hill Climb at Goodwood Festival of Speed. I became intrigued by the possibility of further evolution and I’m very excited to be sharing the first details of the engine for my car.”

Paul McNamara, Technical Director, Williams Advanced Engineering added: “This has been a fantastic opportunity to showcase the core capabilities of Williams Advanced Engineering. Having had the opportunity to consult with Hans Mezger – the “father” of the iconic air-cooled flat-six – about the development of the engine, our team was pleased to be able to provide a solution to Singer’s clients’ requirements and of course, to be a part of this iconic vehicle’s continued evolution.”

Singer is not sponsored, associated, approved, endorsed nor, in any way, affiliated with Porsche Cars North America, Inc., or Dr. Ing. h.c.F. Porsche, AG. The Porsche® name and crest and 911® are trademarks of Dr. Ing. h.c.F. Porsche AG, and any other products mentioned are the trademarks of their respective holders. Any mention of trademarked names or other marks is for purpose of reference only.

The product of Singer’s painstaking effort is a Porsche 911 restored and reimagined by Singer.  Out of respect for Porsche, and to respect Porsche’s trademark rights, this incredible machine should never under any circumstances be referred to or described as a “Singer,” “Singer 911,” “Singer Porsche 911” or a “Porsche Singer 911,” or in any other manner that suggests that it is anything but a Porsche 911.