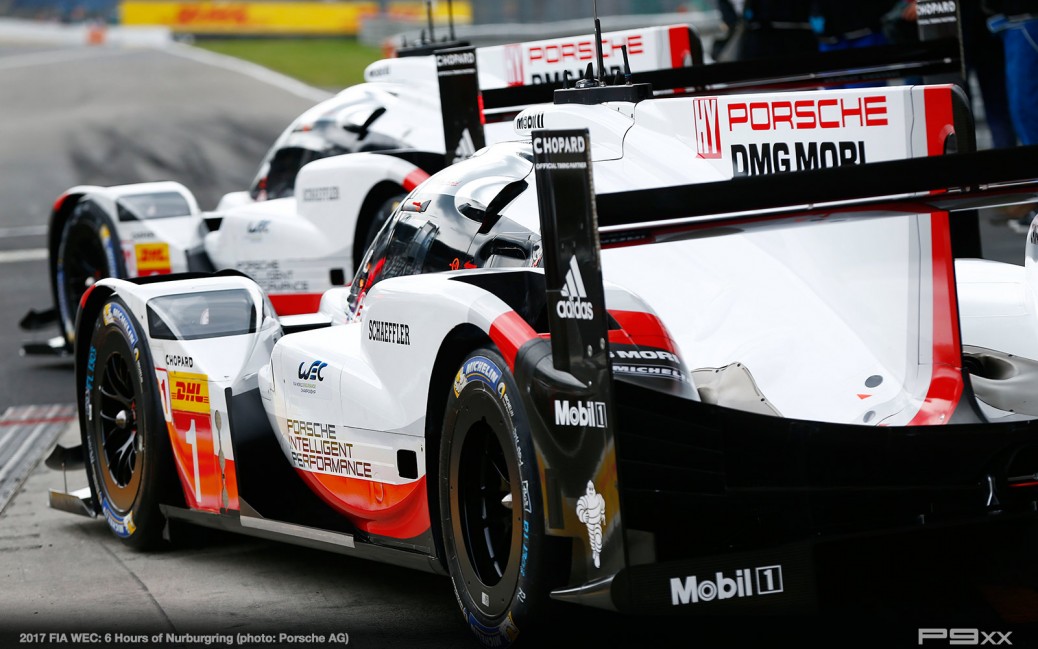 In the WEC, the average of the two fastest laps of two drivers counts for the qualifying result. Bernhard/Hartley achieved an average time of 1:38.272 minutes for car number 2. Jani/Lotterer in car number 1 managed a time of 1:38.278 min. Lotterer actually set the outright fastest qualifying lap of 1:37.886 minutes but could not make up for the fact that Jani had lost the rear on his flying lap. Pole-position went to Toyota. The respective third drivers of each Porsche 919 Hybrid – Nick Tandy (GB) and Earl Bamber (NZ) – were not involved in qualifying on this occasion.

The third free practice session in the morning saw the two Porsche 919 Hybrids in P3 (car number 2, 1:40.635 minutes) and P4 (car number 1, 1:40.767 minutes). Practice and qualifying took place in dry conditions. For the six-hour race on Sunday, 1pm to 7pm, a risk of rain is forecast. Race action is broadcast internationally online and on TV (details at https://tinyurl.com/yd63jlwy). Fritz Enzinger, Vice President LMP1: “After this thrilling qualifying with it’s very close lap times, we feel confident for the race. In free practice we had very good lap times on our longer runs. This has confirmed that our new aerodynamic kit for high-downforce is working very well. And it is also this aspect that makes us optimistic for the second half of the season. We will try everything to fulfil our target and defend both championship titles.”

Andreas Seidl, Team Principal: “We have used free practice to improve the 919’s set-up with the new high downforce aero. In qualifying it was André in particular who impressively exploited the car’s potential. He obviously is comfortable with the new aerodynamics and I’m very happy for him that he managed the outright fastest lap today. Coming from P2 and P3, everything is possible in tomorrow’s race.”

Drivers Porsche 919 Hybrid car number 1:
Neel Jani (33, Switzerland): “We finished P3 but I’m personally unhappy as I threw a possible pole away. André had a great lap and showed the true pace of the car but I had a moment at Turn 12 and lost the rear. Looking at the data that cost us half a second which would have been good enough for pole. It’s disappointing but it’s a long race tomorrow. We have a great car and we’ll attack tomorrow.”

André Lotterer (35, Germany): “It was nice to set the fastest outright lap in qualifying. Unfortunately Neel lost time but that’s what happens when you need to push to the very limit. The high downforce kit suits my driving style better. The car is quick and the long runs look good for tomorrow’s race so hopefully it should be a good race for Porsche starting P2 & P3.”

Drivers Porsche 919 Hybrid car number 2
Timo Bernhard (36, Germany): “Unfortunately, on my flying lap I had to overtake a slow moving LMP2 car which was far from ideal. It’s disappointing the [LMP2] driver didn’t look in his mirrors while on his in- or out-lap as it cost me two or three tenths of a second. Otherwise it could have been close for pole-position. Tomorrow we start the race with full momentum, will attack and try to get the maximum out of it.”

Brendon Hartley (27, New Zealand): “I’ve got mixed emotions as we definitely had a car capable of getting pole today. My lap wasn’t 100% perfect while Timo was delayed by traffic. We missed out on pole by just over one-tenth of a second so it was very close. Thankfully the No8 Toyota, our closest rival in terms of the championship, starts from P4.”

The six-hour race can be followed on various international TV channels around the world. For details click here: https://tinyurl.com/yd63jlwy