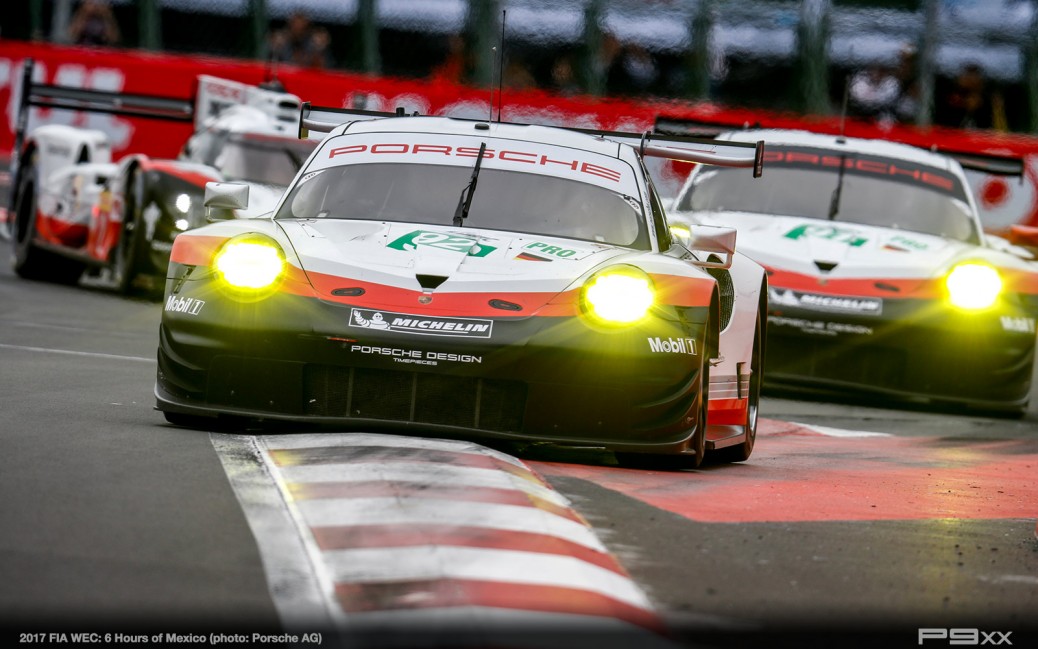 Stuttgart. The six-hour race at the Autódromo Hermanos Rodríguez in Mexico City on 3 September marks the start of the second half of the Sports Car World Endurance Championship season. The Porsche GT Team fields two new 911 RSR in the GTE-Pro class on the racetrack at an elevation of 2,310 metres. The 510 hp 911 RSR racer celebrated its maiden victory on July 22, 2017, at the American IMSA SportsCar Championship race in Lime Rock. This is the second time that Mexico has hosted a WEC round. Like at the 2016 premiere, fans can again look forward to a gripping race with fierce duelling, particularly in the GT-Pro class. The Balance of Performance, which was created to ensure that all vehicles of different concepts compete on the same performance level, has been readjusted for this race. Next up after Mexico are the WEC rounds in the USA, Japan, China and Bahrain.

The race
With the Autódromo Hermanos Rodríguez, Mexico has paid tribute to its racing legends Pedro and Rícardo Rodriguez. The 4.421-kilometre racetrack with its 17 corners can look back on an eventful past. Since Jim Clark won the Formula 1 race there in 1963, the circuit has been closed on and off for renovations and then reopened. The corner combination at the end of the back straight is exceptional: It runs through the Foro Sol, a former baseball stadium that can seat 26,000 spectators.

The Porsche drivers
Four works drivers and a Porsche Young Professional compete for the Porsche GT Team: Richard Lietz (Austria) and Frédéric Makowiecki (France) share the cockpit of the #91 Porsche 911 RSR in the GTE-Pro class. They kicked off the season with third place at Silverstone and clinched second recently on the Nürburgring. Their team colleagues Michael Christensen (Denmark) and Kévin Estre (France), who finished third at the Nürburgring, man the #92 car. In the GTE-Am class, the Porsche customer squad Dempsey Proton Racing fields a 911 RSR from the 2015 model year. The drivers of the #77 vehicle are the Porsche Young Professional Matteo Cairoli (Italy) as well as Christian Ried and Marvin Dienst from Germany. So far this season, they have achieved a victory at the Nürburgring, third place at Silverstone and second in Spa-Francorchamps.

The Porsche 911 RSR
Porsche Motorsport at Weissach designed the Porsche 911 RSR  from scratch for this season, based on the high-performance 911 GT3 RS sports car. Depending on the size of the restrictor, the motor, which is now positioned in front of the rear axle, puts out around 375 kW (510 hp). Thanks to the particularly large rear diffuser combined with a top-mounted rear wing, the level of downforce and the aerodynamic efficiency were significantly improved. The 911 RSR made a successful start to the WEC season, clinching third at its maiden outing in Silverstone. On the Nürburgring recently, it scored a double podium result with second and third place.

The schedule
The six-hour race in Mexico City starts on Sunday, 3 September, at midday local time (19.00 hrs CEST). The TV channel Sport 1 broadcasts the start preparations and the podium ceremony live from 18.30 to 01.20 hrs. The race can also be viewed free-of-charge via live streaming from 14.00 to 21.00 hrs on Sport1.de. On pay-TV, the race can be watched from 18.45 to 01.15 on Motorsport.TV. The FIA WEC app is free in its basic version, and offers live streaming of the complete race as well as the time-keeping for a fee. Eurosport telecasts the race highlights on Monday, 4 September, from 11.30 to 12.30 hours.

Dr. Frank-Steffen Walliser, Vice President Motorsport and GT Cars: “The heat and the high altitude make this race a very special challenge. We didn’t compete as a works team at last year’s WEC premiere on this racetrack, so we don’t have any practical experience that could be of any real help to us. We’ll use each practice session to focus on finding the best possible setup for the special conditions. Our one-two result at the Nürburgring underlined that we’re on the right track. The first WEC victory for our new 911 RSR is very probably just a matter of time.”

Marco Ujhasi, Director GT Factory Motorsports: “The thin air at this altitude has a huge influence on the engine performance and also impacts on the aerodynamics. The stress on the tyres, however, is not as extreme as on other racetracks. I’m interested to see how we’ll cope with these conditions with the new 911 RSR and how good our setup is. In any case, it’ll definitely be an exciting task.”

Richard Lietz (911 RSR #91): “My first race in Mexico last year was a great experience. The enthusiasm of motor racing fans in this country is unbelievable. And then there’s the racetrack. A section of it runs through a massive sports arena and when you approach the grandstands filled with these keen fans you really get goose bumps, despite the heat. We’re tackling this race with our new 911 RSR under very different circumstances. We’re very close to achieving our first victory; we saw this at the Nürburgring after clinching second place. Perhaps the time is right in Mexico.”

Frédéric Makowiecki (911 RSR #91): “I’m looking forward to this race. Unfortunately I wasn’t there last year when the WEC raced for the first time in Mexico. So this will be a whole new experience for me. Racing in such megacities always has its very own appeal. And after the strong performance at the Nürburgring, it’s now time to bring home the first WEC victory with our new 911 RSR.”

Michael Christensen (911 RSR #92): “Last year’s race here was huge fun. I like the track; it’s totally different to the others I’ve raced on in the WEC. The altitude has an effect on the engine performance, but that’s something all the teams have to cope with. It’ll be interesting to see how the tyres perform under the special conditions and what the grip level is like. Ultimately, that’ll again be the key to success.”

Kévin Estre (911 RSR #92): “Mexico is completely new territory for me. I’ve never been to Central or South America, so I’m really looking forward to this race. The fact that the circuit runs straight through a baseball stadium is fantastic, Michael my teammate told me about it. Because it’s so close to the huge metropolis of Mexico City, masses of spectators flocked to watch last year’s inaugural WEC race here. The Mexicans are passionate people and they love motor racing – and that’s what makes the atmosphere in the huge arena so incredible.”

Matteo Cairoli (911 RSR #77): “It was a fantastic experience to score my first world championship win with the Porsche – and on the Nürburgring of all places. A dream came true for me. As a team, we showed that everything is possible this season. This success is hugely motivating. Now we’re determined to fight again for victory in Mexico.”

Balance of Performance (BoP)
The “Balance of Performance” applies to the GTE-Pro class of the WEC Sports Car World Endurance Championship. “BoP” was introduced by the FIA ​​with the aim of achieving a level playing field for the different vehicle concepts, and thus ensuring balanced and fair races. The intention is that it should not make a fundamental difference if a vehicle is powered by a turbocharged or normally aspirated engine, or if the engine is mounted on the front axle or in front of the rear axle. The basic aerodynamic shape of the vehicles should also not play a decisive role. After an initial grading by the FIA, the balance of performance is adjusted at the races by means of telemetry – not only using lap times, but also acceleration profiles and engine mappings. This data input is analysed and automatically incorporated into the “Balance of Performance”. The most frequently used means of adjusting the performance level is through adding or subtracting weight. In keeping with the rule-makers’ intention, the key to success on the racetrack is not about the individual potential of a vehicle, instead it’s about the performance of the drivers, the race strategy, a perfect setup or the skill of the team with their pit stops.