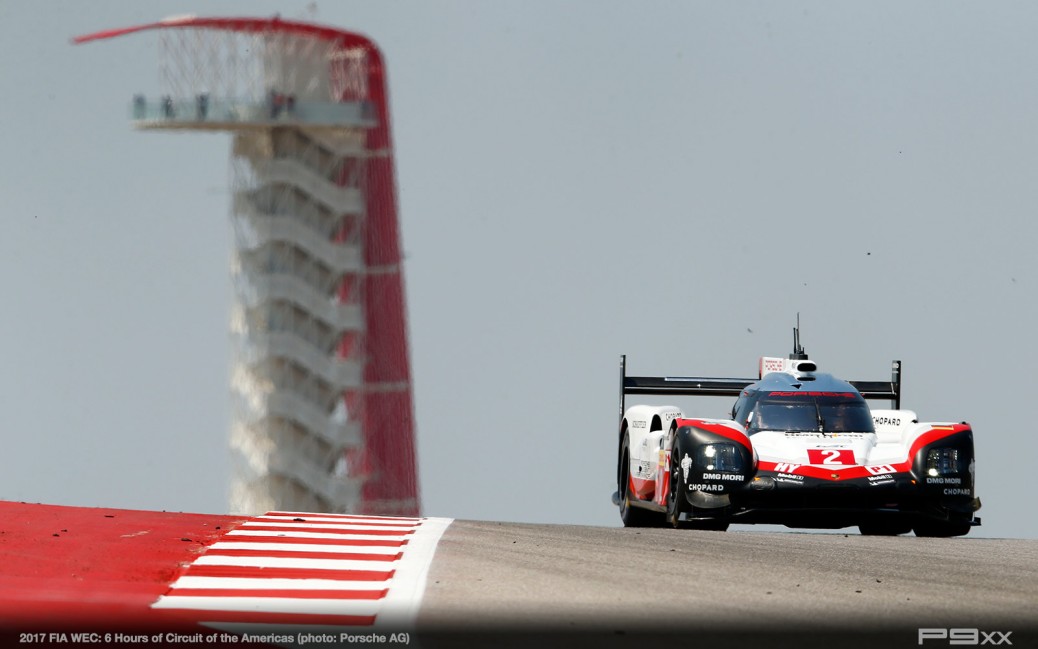 Stuttgart. After its one-two race win in Mexico City, the Porsche LMP Team sees the deck being reshuffled for the sixth round of the FIA World Endurance Championship (WEC): On September 16, the six-hour race at the Circuit of the Americas (COTA) in Austin, Texas (USA) will likely be held in demanding heat. In recent years it started at 5 pm and ended at 11 pm which meant half the race took place after dark in cooler temperatures. For 2017, it has been rescheduled to start at noon and finish at 6 pm. The ambient temperatures at 5 pm were still over 35 degrees Celsius last year. In 2014, the race was interrupted because of heavy rain. Everything would seem to be possible in Austin.

In what is the fourth and final season for the innovative prototype Porsche 919 Hybrid, the Porsche LMP Team is aiming to achieve a third consecutive world championship title for manufacturers and drivers. Porsche has now scored 198 points in the manufacturers’ world championship with Toyota on 141.5 points. In the drivers’ rankings, Earl Bamber (NZ), Timo Bernhard (DE) and Brendon Hartley (NZ) lead with 134 points. After wins in Le Mans, at the Nürburgring and in Mexico, they are 41 points ahead of the best placed Toyota trio. Neel Jani (CH), André Lotterer (DE) and Nick Tandy (GB) lie third in the championship (64 points).

Fritz Enzinger, Vice President LMP1, says before the next race on the American continent: “I’m very proud of how much energy our team has put in preparing for the second half of the season. After the announcement to withdraw from the championship at the end of the season, the emphasis easily could have dropped. But this didn’t happen. We want to finish off the successful story of the Porsche 919 Hybrid with another two world championship titles.”

The race in Austin is a Saturday event – noon until 6 pm – and will be broadcast worldwide on the internet and television. The Porsche 919 Hybrid
The class 1 Le Mans Prototype (LMP1) develops a system power of around 900 HP (662 kW) that comes from a compact two-litre turbo charged V4-cylinder (nearly 500 HP/368 kW) engine and two different energy recovery systems – brake energy from the front axle combined with exhaust energy. The combustion engine drives the rear axle while the electro motor boosts the front axle with an output of more than 400 HP (294 kW). The electrical energy that comes from the front brakes and the exhaust system is temporarily stored in a liquid-cooled lithium ion battery.

The Porsche LMP Team before the race in Austin

Team Principal Andreas Seidl: “We have a great deal of respect for the race in Austin. The circuit isn’t only regarded as a demanding one from our drivers, it also puts huge loads on our 919. Especially if it is as hot as last year and we cannot hope for dropping temperatures for the second half of the race at night anymore. We have done intense preparation work for these conditions at a test in Barcelona, also together with our tyre partner Michelin. The topic of reliability gets a special dimension in the heat. Of course we use the maximum potential to optimize cooling, but the options are limited. Also set-up work requires good compromises to make the car fit for the fast sections as well as for the slower parts. I know our team and drivers will deal with these challenges in the best possible way. Full throttle until the finale – that’s our motto.”

Neel Jani (33, Switzerland): “Austin is always cool. The city and the surroundings are just great. To race at the hottest time of the day will certainly be challenging for man and machine. For me personally, visiting the States always means having my wife Lauren’s family around. I have a close connection to the country and enjoy very much being there.”

André Lotterer (35, Germany): “The last time I won this race was in 2014. It’s a cool circuit. A long lap with a mixture of fast and slow parts on which everything needs to fit. Set-up work is quite a challenge. The first sector is great fun but then a couple of corners follow that are pretty narrow for our fast prototypes. Lapping slower cars is not easy and you have to be careful to not exceed track limits. The heat will make us really sweat with high cockpit temperatures. Hopefully we can get in another top result and make the American Porsche fans happy.”

Nick Tandy (32, Great Britain): “I have been a few times to Austin. I had my first race with the Porsche 911 RSR there in 2014 and I have been on the podium twice, never in first place, but still it’s been a pretty successful race track for me. Because of our high downforce configuration our top speed on the long straights won’t be very high but the cornering forces in the first part of the lap will probably be something I have never experienced in my life and I’m looking forward to this. Austin is a place in the world I really love to visit, one of my favourite cities. I like the atmosphere, the town, the people, the food like a big Texas steak and the way people in America get excited about race events which is different to other countries.”

Earl Bamber (27, New Zealand): “I have good memories in Austin. I have won the Porsche Supercup Championship there in 2014 and it is also the place where I took my first ever GT win for Porsche in 2016. It is a track I really, really like. I’m especially looking forward to the triple right-hander at the end of the lap as this will be quite special in the LMP1 car. I also love the area as well. Austin is always beautiful. I spend quite some time there with coaching local guys.”

Timo Bernhard (36, Germany): “COTA is a great and challenging circuit. Although it is one of the latest modern Formula 1 tracks, it isn’t boring. The variety of all parts requires very different speeds. The most interesting one is the first sector with the Esses. It obviously makes a big difference that we don’t race into the night anymore. I think this is a shame. I loved the atmosphere of driving in the dark. The expected heat will have an significant impact on tyre choice and car set-up.”

Brendon Hartley (27, New Zealand): “After three wins in a row we head to Austin with confidence and a kick in our step. Austin is a great track and a city we all enjoy visiting. I expect Toyota will be closer than in Mexico and will put up a big fight. Our goal is clear, keep extending our championship lead.”

TV and live streaming:
– The official WEC App can be downloaded free of charge with an extended (not free of charge) version available which includes full live streaming and full timing. The live stream is voiced by the FIA WEC TV team including live interviews from the pits.
– The WEC races can be followed on various international TV channels in Europe, Asia, Australia and New Zealand, North and South America as well as in the Middle East and Africa.

– The WEC efficiency regulations limit the amount of energy that can be used per lap. On the 5.513 kilometres long lap of the Circuit of The Americas, the Porsche 919 Hybrid can use 5.02 megajoule of electrical power from energy recovery systems and 1.41 kg/1.94 litres of petrol.

– At normal race speed, the Porsche 919 Hybrid is due for refuelling after a maximum of 31 laps.

– Refuelling and changing tyres may only be done sequentially, not at the same time. Only four mechanics may work simultaneously when changing tyres and also may use only one wheel gun at a time. That takes a lot longer than in F1, for example.

– The drivers are normally only changed when new tyres are needed.

– These different types of tyres can be used: three different compounds of slick tyres for dry conditions, a hybrid tyre (no profile either but softer cover) for mixed conditions and wet weather tyres. Four sets of dry weather tyres are available per car for qualifying and the race, this is two sets less than in 2016.

– A lap on the Grand Prix circuit has eleven right handers and six left handers.

– In the 2016 qualifying, Timo Bernhard/Brendon Hartley came third. The average time of their fastest lap in the Porsche 919 Hybrid was 1:46.560. Romain Dumas/Neel Jani qualified fifth with the sister car (average 1:47.331 minutes). André Lotterer took pole position at the wheel of an Audi, managing the overall fastest qualifying lap in 1:45.703 minutes. The average time for pole was 1:45.750 minutes.

– Despite a late start at 5 pm, ambient temperatures were still over 35 degrees Celsius. The more the heat dropped, the stronger the 919 became. Half way through the race, the trio of Bernhard, Hartley and Mark Webber took the lead and kept it until the finish. Dumas, Jani and Marc Lieb lost some time with two extra stops because of lowering tyre pressures. The 2016 world champions finished fourth in Austin.