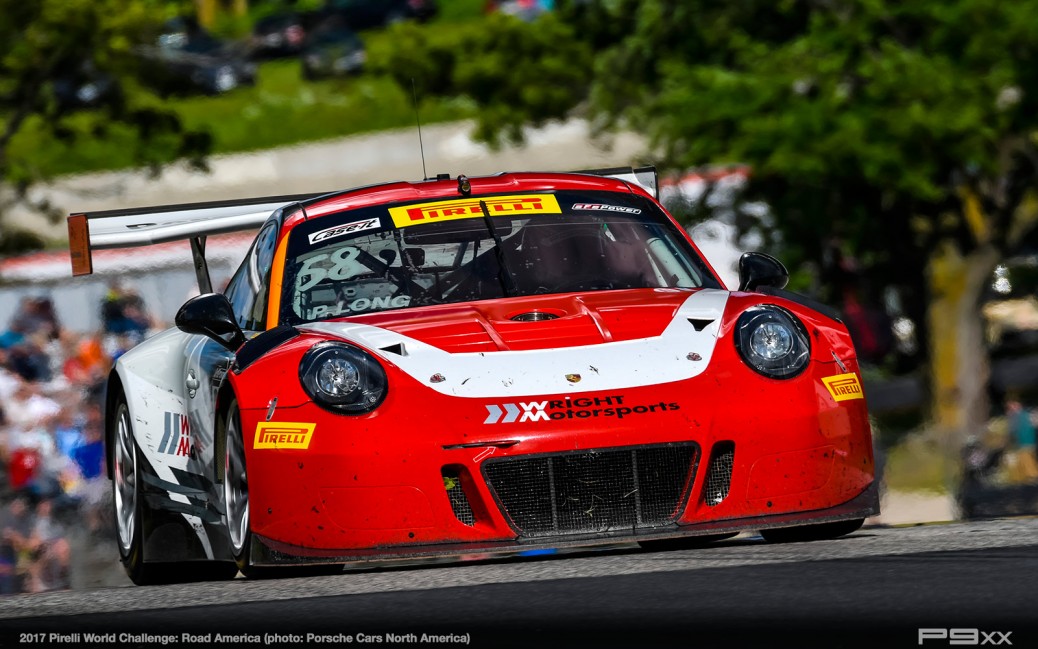 North America’s only Porsche factory driver, Patrick Long, earned his second Pirelli World Challenge (PWC) GT Sprint Championship race victory of 2017 in addition to a second-place finish in the two-race weekend at Road America. The Manhattan Beach, California driver sat the No. 58 Porsche Consulting Wright Motorsports Porsche 911 GT3 R on the front row for both races during the June 24-25 event and earned enough points to put him back in the Drivers’ points lead. Twin wins at the classic American road course in Elkhart Lake, Wisconsin also catapulted James Sofronas (Villa Park, California) into the GTA Drivers’ championship lead in his No. 14 GMG Porsche 911 GT3 R.

The battle in each of the 50-minute, single driver format races was between Long and the Bentley of Adderly Fong. Fong earned pole position each race on the 4.048-mile, 14-turn circuit. In Saturday’s Race 1 – Round 4 of 10 in the Sprint Championship – Fong beat Long to Turn 1 and held the lead the remainder of the race despite heavy pressure from the Porsche veteran. Long would finish in second-place gaining valuable points in the title chase. Race 2 would see the two side-by-side again entering the first turn at the end of Road America’s long front-straightaway – much of which is up hill. However, the 2011 PWC GT Champ dove deeper into the corner and wrestled the point away from the Bentley driver. The two would hold position in close order until an accident involving the No. 99 GAINSCO/Bob Stallings Racing Porsche 911 GT3 R driven by Jon Fogarty (Bend, Oregon). The “Red Dragon” was turned in heavy traffic and made contact first with a competitor and then with the Armco retaining wall. The Porsche was heavily damaged but did its job keeping the multi-time road racing champion unhurt. The cleanup from the incident as well as the repair to the barrier caused a long red flag.

Once the race went back to green, Long and Fong continued their duel. The two-time 24 Hours of Le Mans winner was able to stave off Fong to take the checkered flag, the victory and valuable points. The contest was so intense that the two crossed the finish line a narrow 0.239-seconds apart. The split at the line tied the all-time closest finish in PWC history. Long earned the prestigious “Move of the Race” for his first turn effort. Alec Udell (The Woodlands, Texas) was the second-highest finishing Porsche both days taking the No. 17 Euroworld Motorsports by GMG 911 GT3 R to seventh-place in each race. The Porsche Young Driver Academy graduate’s performance – earned on the merits of impressive starts both days – garnered him the “Hard Charger Award” both days for most positions gained – four – during a race.

Sofronas drove the No. 14 GMG Porsche 911 GT3 R to two consecutive race wins at Road America in the GT Amateur (GTA) class. The wins provided important points moving the owner of Global Motorsports Group (GMG) into the points lead for the class. His efforts were buoyed when Michael Schein (Glen Cove, New York) missed qualifying and Race 1 for a family commitment. He was then caught in a first lap incident with fellow Porsche GTA driver Preston Calvert (Potomac, Maryland) that eliminated the No. 16 Wright Motorsports 911 GT3 R from the race. Schein scored no points for the weekend. The Pirelli World Challenge will now go on hiatus until July 29-30 when the Sprint Championship returns to the Mid-Ohio Sports Car Course for Rounds 6 and 7.

See a full photo gallery for this race HERE.