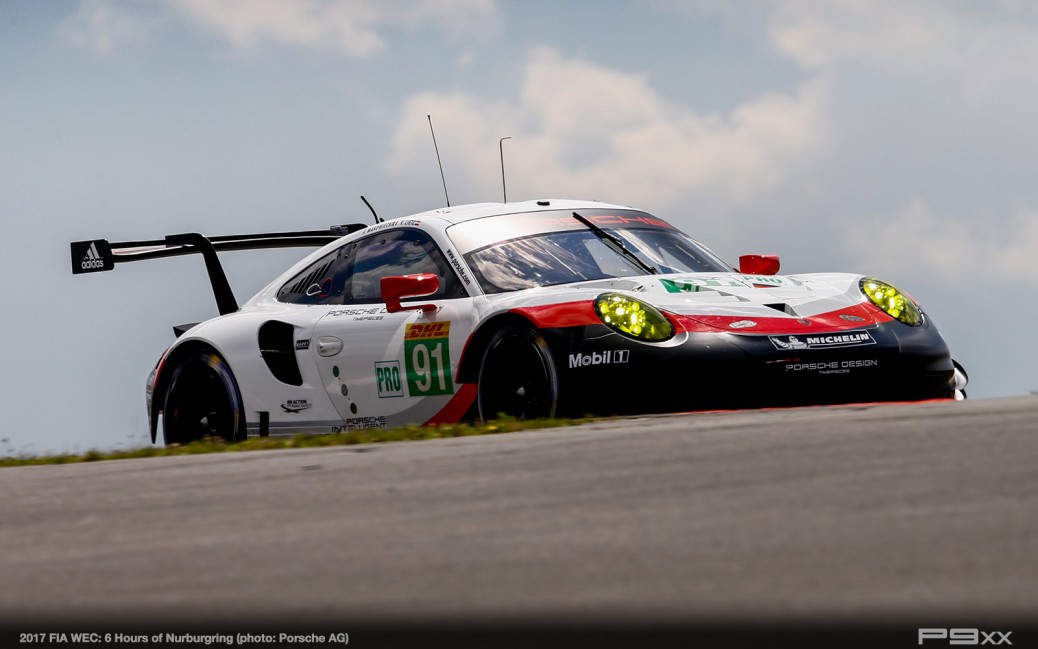 Stuttgart. The new Porsche 911 tackles its home race on the Nürburgring from pole position in the Sports Car World Endurance Championship WEC. In the qualifying on the 5.148-kilometre circuit in Germany’s Eifel region, Michael Christensen (Denmark) and Kévin Estre (France) set the quickest time in the GTE-Pro class with the numbr 92 contender. For Porsche, this is the first pole in this traditionally cutthroat category since the race in Bahrain in 2013. In the second (#91) 911 RSR fielded by the Porsche GT Team, Richard Lietz (Austria) and Frédéric Makowiecki (France) clocked the third fastest time.

This marks the second pole position in a row for the 911 RSR, which Porsche Motorsport in Weissach designed from scratch for this season on the basis of the high-performance 911 GT3 RS sports car. At the Bowmanville race in the IMSA SportsCar Championship a week ago, the 510 hp racer also occupied the front grid spot.

The fastest Porsche in the GTE-Am class, in which customer teams field two 911 RSR from the 2015 model year, was the number 77 race from Dempsey Proton Racing in second place. One of the drivers is Porsche Young Professional Matteo Cairoli (Italy). Gulf Racing takes up the race from fourth on the grid.

The six-hour race starts on Sunday at 13.00 hrs CEST. Sport 1 broadcasts live from 12.30 to 19.45 hrs. Sport 1.de televises the race as a live stream. Eurosport televises the last hour of racing as well as the podium ceremony live from 18.15 to 19.15 hrs. The FIA WEC App is free in its basic version. For a fee, the App offers a live stream of the entire race plus live timing. Qualifying quotes
Dr. Frank-Steffen Walliser, Vice President Motorsport and GT Cars: “This is, of course, a super result for the team and hugely motivating for our home race on Sunday. But, despite all the euphoria, the name of the game for us now is to prepare intensively, as usual. The race runs over six hours, the tyres and the consistency will play decisive roles. After Bowmanville in the IMSA SportsCar Championship last week, this is the second pole position in a row for the new 911 RSR. Naturally, we’re especially pleased about this. We already saw at Le Mans that we now understand the new car under the most diverse conditions. The fact that we compete with the 911 RSR in two top-league series is definitely an advantage. The teams in Germany and the USA reap mutual benefits. And we’re also very pleased with the great starting position for our customer team Dempsey Proton Racing, who secured a front row spot on the GTE-Am grid.”

Richard Lietz (911 RSR #91): “Everything ran to plan in the qualifying. We only used one set of tyres for the session, so we’re in a good position for the race. I’m also thrilled for my teammates Michael and Kévin who planted the 911 RSR on pole.”

Frédéric Makowiecki (911 RSR #91): “That was a good qualifying session. Our teammates on pole, and us on third – we should be able to do something with this in the race. I’m feeling very confident, because we were totally happy with our 911 RSR in all practices and now in the qualifying, as well. And we only used one set of tyres, several of our competitors used two. I think we’re well set.”

Michael Christensen (911 RSR #92): “I managed to get a great lap in. Compared to the last practice, this was a huge improvement. I was almost surprised by how much grip the tyres developed. After the first corner I thought, wow, I could have actually gone even faster. I want to thank the team for putting an excellently prepared 911 RSR on the track for us.”

Kévin Estre (911 RSR #92): “My first pole in the WEC feels fantastic. We have experienced some very difficult qualifying sessions this year, so this makes us all the more relieved that the huge amount of work we’ve done has paid off. I made a tiny error in the first corner, but otherwise the lap was good enough for pole. I hope that we can now repeat this performance in the race. If we can do that, the season really takes off for us now.”