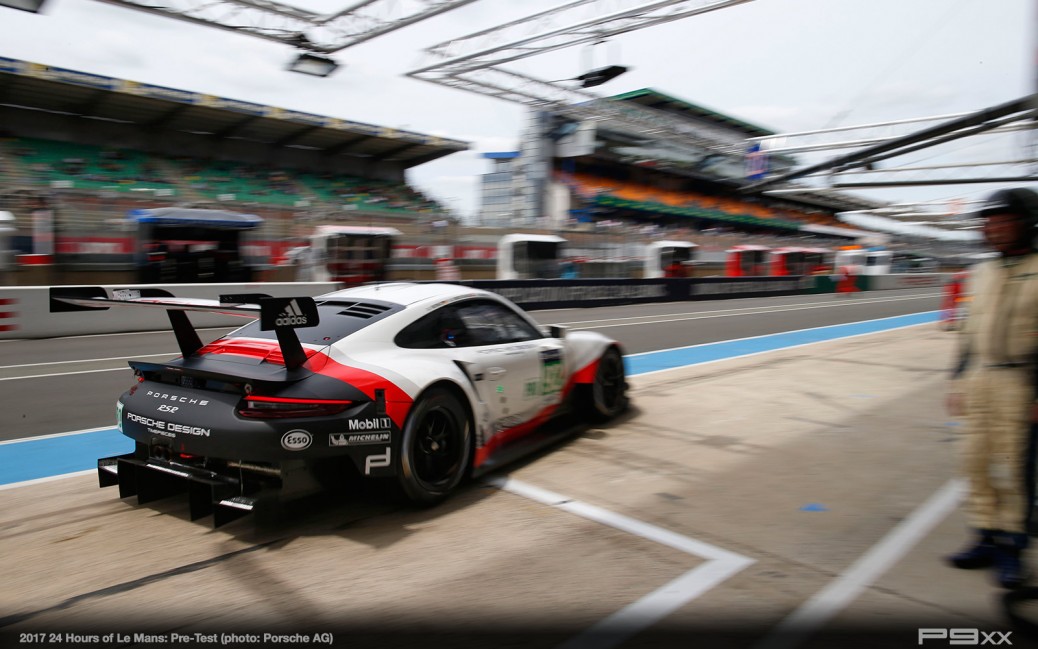 Stuttgart. The countdown for the Le Mans 24 Hours is on: At the official pretest on the 13.629-kilometre Circuit des 24 Heures, the Porsche GT Team has entered the critical phase in preparing for the world’s toughest automobile race. Sixty cars and 180 drivers will take up the prestigious pursuit around the clock on 17 June, which marks the 85th running of the French classic. Two of these contenders are the new 911 RSR. The 510 hp race car, which Porsche Motorsport developed in Weissach based on the seventh generation of the iconic 911 sportscar, celebrates its much anticipated debut at Le Mans in the fiercely contested GTE-Pro class. In changeable conditions and pleasant temperatures of just over 20 degrees Celsius, all six GT works drivers, who will drive the 911 RSR at the long-distance Le Mans classic in France, worked on the setup of the new cars and on testing tyre options. Richard Lietz (Austria) and the Frenchmen Patrick Pilet and Frédéric Makowiecki share driving duties in the #91 Porsche 911 RSR. During the two four-hour test sessions, the trio covered a distance of 1,185.723 kilometres and drove the fastest lap in the GTE-Pro class. The sister car with the starting number 92, driven by Michael Christensen (Denmark), Kévin Estre (France) and Dirk Werner (Germany), covered a distance of 981.288 kilometres and posted the second quickest time. The 24-hour circuit with its legendary corners like Mulsanne and Tertre Rouge as well as its almost five-kilometre-long Mulsanne straight is unusual in its mix of racetrack and normal roads. This, too, throws special challenges at the pilots and their cars. At the pretests, the focus for the three Porsche customer teams fielding four 2015-spec 911 RSR in the GTE-Am class was on the setup and tyres. The spotlight was on the #77 nine-eleven run by Dempsey Proton Racing with the Porsche Young Professional Matteo Cairoli (Italy) who celebrates his debut at the world famous long-distance classic. Patrick Long (USA), as another Porsche factory driver, competes for the Proton Competition customer team, fielding two 911 RSR. The third customer squad is Gulf Racing. The race takes off on Saturday, 17 June, at 15.00 hrs CEST. The FIA WEC App is free in its basic version. For a fee, the App offers a live stream of the entire race plus live timing.

Comments on the test

Dr. Frank-Steffen Walliser, Vice President Motorsport and GT Cars
“The first tests at Le Mans with the new 911 RSR were very clearly on the tyre situation and the setup. After the first laps our drivers provided us with a very encouraging feedback. The car feels good, the drivers feel comfortable, the 911 RSR responds logically to all our set-up changes. Right from the start everything ran according to plan. The fast lap times gave us a good comparison to our simulations and an insight into the grip conditions on this non-permanent racetrack. We now know where we stand, even if not exactly how we compare to the competition. This is because today’s testing programmes were simply too different.”

Marco Ujhasi, Director GT Factory Motorsports
“Today we put our new 911 RSR on the Le Mans track with a low downforce trim for the first time. Hence, we had to work through some issues with the setup and tyre choice. We did this successfully. The new driver crews worked well together so that we were able to wrap up the race preparation. In the race week we’ll be able to concentrate on details and the team procedures.”
Richard Lietz (911 RSR #91): “That was a positive test for us and critical for the race preparation. With three drivers we all have to feel good in the car, we have to cope with the circuit and most of all with the setup. So our team had a lot to do but we’re heading home feeling good.”

Frédéric Makowiecki (911 RSR #91)
“This test was an important part of our preparation. There is not a lot of practice time during the race week, so we had to sort out important issues like aerodynamics and tyres and had to make sure within a very short time to work in the right direction. That’s a big challenge and possibly pivotal for the race.”
Patrick Pilet (911 RSR #91): “It’s been one year since we drove at Le Mans. These tests were predominantly about seeing how the new 911 RSR reacts to this racetrack. My first lap at Le Mans with the brand-new car was a very emotional moment for me. We used this test day very well and we can confidently look forward to the race.”

Michael Christensen (911 RSR #92)
“This test day was a very important step in our preparation for the most important race of the year. We used today to better familiarise ourselves with the Le Mans aerokit and to get used to this very special circuit after being away for a year.”

Kévin Estre (911 RSR #92)
“This test was crucial. Le Mans is a very special circuit which requires a special setup for the 911 RSR, different tyres and a different aerokit. The Le Mans race week doesn’t give us a lot of time to adjust to the special conditions here, and hence every test kilometre is important.”

Dirk Werner (911 RSR #92)
“This is the first time that we’ve driven our 911 RSR on this circuit. For me those were my very first Le Mans laps with Porsche. We’ve worked our way through everything on our comprehensive list at these tests. We put particular emphasis on working on the setup and the tyres. Now we look forward to the race.”

Matteo Cairoli (911 RSR #77)
“To drive the 911 RSR at Le Mans – this was just a dream not long ago. And now this dream has come true. This test was a taster for what is about to come. I enjoyed every kilometre today.”

Patrick Long (911 RSR #93)
“A part of the Le Mans circuit is normally open to everyday traffic and that’s why we can’t just come and test anytime. So this made it all the more important to set up our 911 RSR for the race in a very short time.”