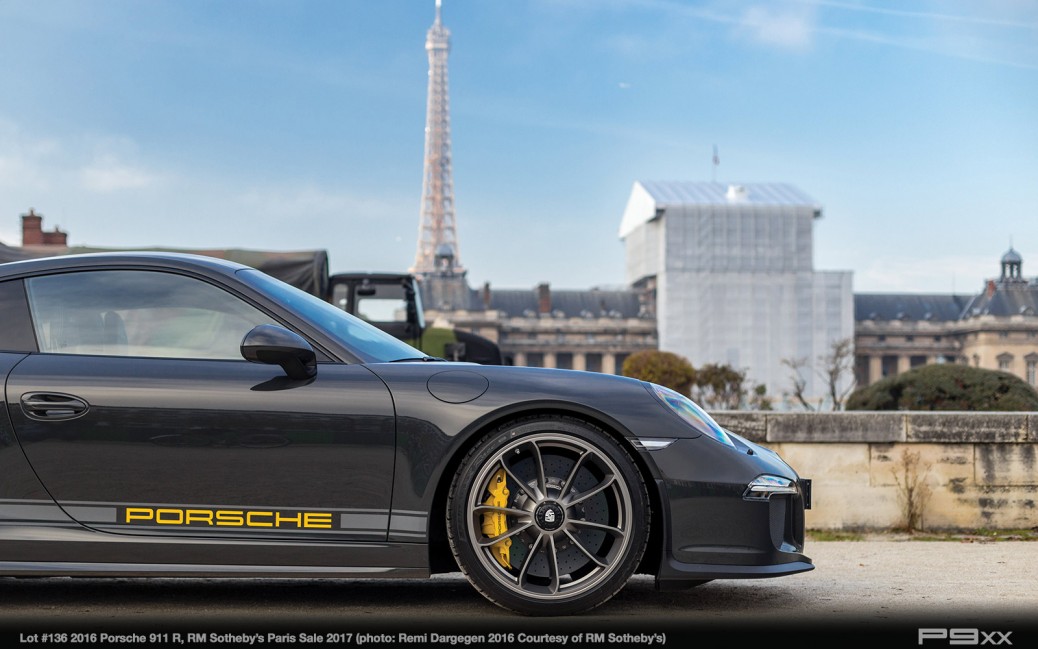 We doubt a MY2016 Porsche can yet be called a classic, and yet we suspect there is no doubt that the car you see here will become one just as soon as that label may be reasonably applied. Set to be sold at this year’s RM Sotheby’s Paris Sale during Retromobile week, this 911 R is said to be the only Paint to Sample 911 R sold into the French market. It’s also a tribute to Steve McQueen. Any self respecting Porschephile already knows the drill on the 911 R and just what makes it so sought-after by aficionados. Most will also know that the car was only made available in two standard colors. Obviously, Porsche’s tailor-your-own Paint to Sample program has been richly employed in the building of these very limited and special cars, and the specimen being sold in Paris is a great example of that. The paint color is Slate Grey, with contrasting silver stripes, yellow Porsche script lettering, and black leather interior with the must-have houndstooth seat centers. Sans stripes, this car would be pretty close to a modern ringer to the grey 911 McQueen drove in the opening sequence of the movie Le Mans. Apparently, that’s not lost on the owner, who chose to also spec a McQueen Le Mans quote to be inscribed and illuminated on the door sills. It reads, “Racing is life. Anything that happens before or after is just waiting.” The car was originally delivered to Paris. It was thoughtfully specced and chosen, and RM relays that the owner was told another 911 R would not be built in this color or spec. The car itself is #967 of the 991 units built, said to be significant chosen because the original 911 R was built in 1967. The introduction of the 991-generation of the 911 GT3 RS caused quite the fanfare amongst Porsche’s most faithful customers. Gone was the long-adored six-speed manual transmission, replaced with Porsche’s Doppelkupplungsgetriebe transmission in the relentless pursuit of performance. While some enthusiasts favoured the PDK transmission for its lightning-quick shift times and smooth gear changes, others saw the departure of the traditional six-speed manual as the departure of the true driver’s car.

Porsche heard its customer’s calls and promised something that would be truly incredible: a limited edition 911 with the drivetrain of the GT3 RS but catering to the temperament of the enthusiast driver by fitting a manual transmission. While the car was just rumoured, customers began begging dealerships to take their deposits and give them an allocation in sheer anticipation for what would be an incredible car.

The 911 R was finally introduced at the 2016 Geneva Motor Show. Mechanically similar to the GT3 RS, the 911 R enjoys numerous changes to the suspension, steering, and most notably, the custom-built six-speed manual. However, unlike the GT3 RS, the 911 R is not about the fastest possible lap time, it is about involving the driver with the car and creating the most enjoyable driving experience possible.

While only made available with two standard colours and stripe options, a handful of clients requested Paint to Sample (PTS) colours and were approved, instantly making those examples the most desirable and unique. This particular 911 R benefits from a host of Porsche Exclusive options and remains as one of the most unique examples seen to date. Delivered new to Paris, it is finished in Slate Grey with contrasting silver bonnet stripes and yellow Porsche lettering, and a Black leather interior and bucket seats with houndstooth inserts. Built as a tribute to Steve McQueen by its original owner, the car features personalized illuminated door sills inscribed with McQueen’s famous quote as Michael Delaney in the film Le Mans: ‘Racing is life. Anything that happens before or after is just waiting.’

Furthermore, it is outfitted with the single mass flywheel, Bi-Xenon headlights in black, Bose sound system, Sport Chrono pack, personalized interior with custom floor mats, and the front nose lift, amongst other options. At the time of purchase, the original owner was told that there would not be another 911 R with the same colours or options. The original owner also specified number 967 to celebrate the original 911 R built for racing in 1967.

Finally, 25% of the car’s hammer price above its reserve (with a minimum of €25.000) will be given towards research for curing cancer in children, financed by the Gustave Roussy foundation. Located in Villejuif, just south of Paris, the Institut Gustave Roussy is one of the world’s leading cancer research institutes investing in cutting-edge technology and medicine, with the aim of making major advancements in the fight against cancer.

Tastefully specified with many unique features, including PTS, perhaps Porsche’s own slogan sums up the 911 R best: there is no substitute.