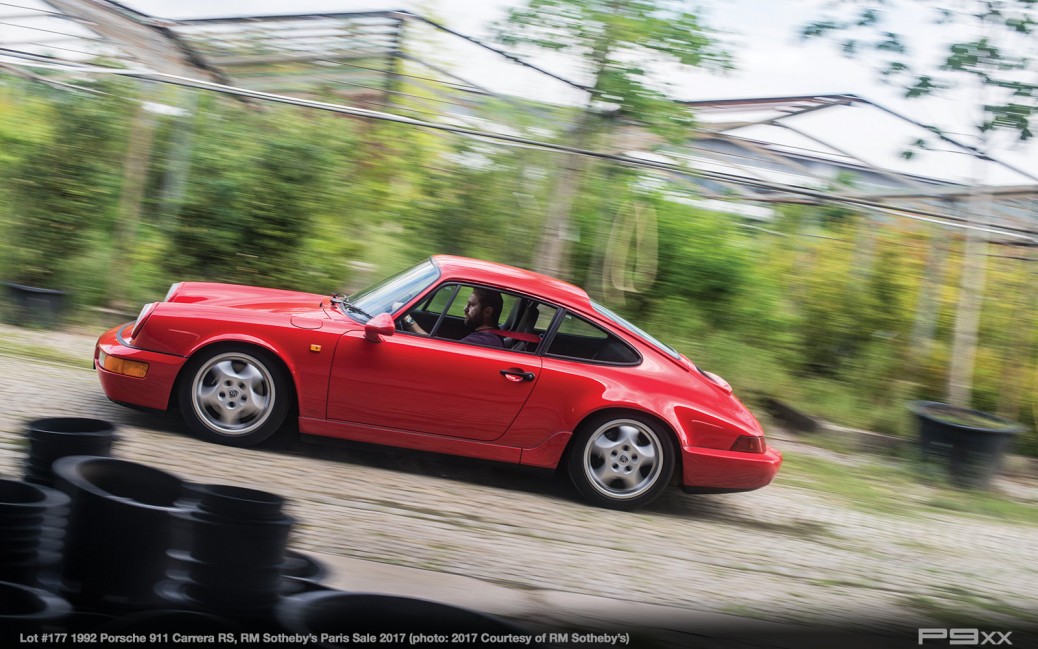 Retromobile Paris remains one of the most significant of the so-called classic car weeks worldwide. Chief amongst the days-long automotive smorgasbord is RM Sotheby’s Paris sale. Porsches will be deep in the cue this year thanks to a few chief collection liquidations, and amongst them will be three very special type 964 generation 911s. Lot #125 – 1994 Porsche 911 Turbo S 3.6
For the purest of the purists, this may be the best of the air-cooled breed of 911 Turbo. Yes, the 993 came later and may have boasted a few more features, but the type 964 (965 in the case of the Turbo) was the last of the largely hand built cars. It also featured the more upright and iconic headlights, not to mention that burly and blown 3.6-liter mill paired with rear-wheel drive.

Interestingly, most of the 964 Turbo S specimens built featured the ‘Flachbau’ or slant nose, which was a no cost option and likely seen as a premium choice. In the eyes of most collectors though, it is the more familiar and iconic standard nose that has aged better, and just 17 examples of the Turbo S were built with this setup and dubbed ‘package cars’. Of course, that’s just the start of the car’s appeal. Black on black was menacing as hell on these cars, and that was before Will Smith drove something similar in Bad Boys. This car also features with the X88 option that bumped it to 385 bhp thanks to a bigger turbo, upgraded camshafts, cylinder heads, adjusted valve timing, an auxiliary oil cooler and ZF locking differential. Package cars also got a X92 front lip spoiler, X93 rear spoiler and X99 optional air inlets. Lot #155 – 1991 Porsche 911 Carrera Cup
Given the look of current-generation 991 Carrera Cup cars, it’s hard to imagine a cup car looking nearly identical to a plain narrow body roadgoing 911 Carrera, but that was the case in its earliest iteration during the 964 era. Short of opening the door and exposing the gutted racer cockpit of this Maritime Blue coupe, the less attuned would have a hard time spotting the lower stance and negative camber of what otherwise appears to be a nicely specced Carrera 2 riding on later Cup 1 wheels. This particular cup car is one of 270 964 cup cars ever built, and one of 120 built in 1991. It’s logged a 3rd place in the 24 Hours of Nurburgring and was once owned and campaigned by Uwe Alzen who would go on to become a Porsche works driver. The car was completely restored to its original 1991 specification in 2014. Lot #177 – 1992 Porsche 911 Carrera RS
For fans of Porsche’s RS line of vehicles, the type 964 Carrera RS marked a return of this legendary nomenclature after years of absence. Visually identical to the Carrera Cup car of the time and quite unlike today’s 911 GT3 RS… or even the 1973 911 Carrera 2.7 RS, the 964 Carrera RS was devoid of racing stripes or spoilers. It seems the theory behind the RS car, at least at that time, was maximum performance combined with maximum sleeper effect.

Though it may have been hard to outwardly tell the difference between the Carrera RS and a basic Carrera 2 even, there is no mistake from behind the wheel. Powered by Porsche’s uprated M64/03 engine, the car also featured lightened flywheel, shorter ratio transmission, a limited slip differential and more aggressive suspension lowered 40mm. The body structure itself was also seam welded in order to increase stiffness, while weight loss measures went well beyond the RS America, with an alloy trunk lid, thinner glass and of course less sound deadening. Unlike a lot of 964s on the market, this is a pristine example. It’s logged just 17,300 kilometers since new. It’s been in the loving ownership of a Porsche collector since new, which means it’s been properly maintained the whole time.

Introduced in early 1990, the 964-generation 911 Turbo S was introduced with the 3.3-litre turbocharged engine from the previous 930-generation 911, as the new 3.6-litre Turbo engine was not quite ready yet. Finally introduced for the 1993 and 1994 model years, only 1,500 of these 3.6-litre cars, both Turbos and Turbo S’ were produced. These cars were also fitted with the uprated ‘Big Red’ brakes and Speedline wheels, and ride height was lowered by almost an inch.

While the vast majority of Turbo S’ were fitted with the ‘Flachbau’ nose as a no-cost option, the Turbo S could also be had with the traditional 964 nose as well. Seventy-six Flachbau cars were built, but only 17 of these non–flat-nose Turbos S’ would be built, dubbed ‘package’ cars. These cars were also fitted with the X88 option, which bumped up total output to at least 385 brake horsepower as well as an auxiliary oil cooler. This was a result of adding a larger turbocharger and increasing the boost, as well as fitting upgraded camshafts, cylinder heads, adjusted valve timing, and a ZF locking differential. Furthermore, the package cars boasted the X92 front lip spoiler, X93 rear spoiler, and the X99 optional engine air inlets.

This particular example looks truly menacing, finished in black on black, it has travelled just under 23,000 kilometres from new and still retains its original paint. Offered from a Swiss Porsche collection, the car was purchased by its current owner from the United States, where it had once belonged to a professional baseball player. It has shared garage space with a number of historically significant and rare Porsches, and it presents in wonderful condition both inside and out. As such, it remains ready for further road use and would be a welcome addition to the garage of any Porsche enthusiast.

This Carrera Cup was originally delivered to Walter Knebel Motorsport for future Porsche Works driver Uwe Alzen to drive in the 1991 Porsche Carrera Cup Germany. A relatively modest 11th position in the 1991 Championship—including 3rd place at the Alemennenring, 5th at Silverstone, and 6th at Spa—was surpassed by an excellent 3rd overall in the stand-alone Nürburgring 24 Hours, with Alzen joined in the car by brother Jürgen, and Thomas Lischke.

In 1992, the car was sold to Jürgen Alzen’s own team for the Nordschleife-based VLN series and yielded 16th overall in the Nürburgring 24 Hours, driven by the elder Alzen, Bernd Maylander, and Hans Stuckenbrock. The car was re-shelled that year with a correct factory replacement (the original invoice is retained), and a similar schedule for 1993 saw the car place 4th in the 24 Hours once again, driven by Jürgen Alzen, Thomas Lischke, and Frank Schmickler.

Sold by Alzen in 1995, and with three subsequent German owners, the car was acquired by the vendor in 2014 and has recently benefited from a complete restoration to original 1991 specification, including bare metal paint in the original Maritime Blue. The original engine was also acquired and has been freshly rebuilt. Importantly, the competition history is supported by the all-important ONS Wagenpass and has been confirmed by the Alzen brothers.

Described by Paul Frere as ‘virtually a road-legal version of the Carrera Cup model’, the 964 RS is a true track-day weapon for the street. Utilizing the uprated Type M64/03 air-cooled flat-six, a lightened flywheel helped to improve engine response. Power is managed through a G50/10 five-speed manual transmission with closer ratios and steel synchronisers, along with a limited-slip differential.

Furthermore, the 964 RS was lowered by 40 millimetres from the standard ride height, and the suspension was fitted with stiffer springs and shocks in addition to adjustable anti-roll bars. The body shell was entirely seam-welded for increased stiffness, light alloy was used for the front bonnet, and thinner glass was employed for some of the windows. Tipping the scales at just over 1,230 kilograms (2,712 pounds), the RS was a sparkling performer and could easily hold its own on the track against almost any competitor in skilled hands.

Purchased new by a German collector of Porsches and offered by him today, this particular Guards Red over Black 964 RS has travelled just 17,300 kilometres from new under his custodianship. It has been properly cared for and routinely maintained its entire life, and it is accompanied by a complete set of owner’s manuals and a file of service invoices.

It is often argued that the best Porsches are the lightweight, track-ready variants, and many would argue that the Carrera RS is the most exciting of the 964 generation. This example certainly will not disappoint.