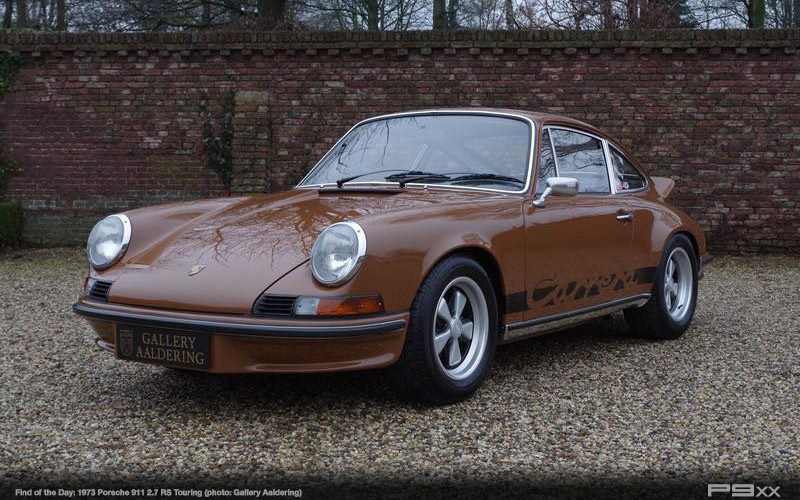 No doubt, the 1973 Porsche 911 Carrera RS 2.7 is one of the most sought after collector 911s going. The car’s lightweight-from-the-factory status and exotic nature make it a unicorn among unicorns, particularly if it’s brown. Sure, while white or say Viper Green are more iconic, nothing says 1970s… or attracts modern car purists… like say Sepia Brown. Pair that with matching numbers, just two owners and touring on-road spec and you have the makings of an incredibly sought-after specimen. Not surprisingly, she won’t come cheap at a cool € 745.000. The car you see here is currently in the inventory of Gallery Aaldering in The Netherlands. Whether you’re in Europe though really isn’t terribly important as this car is antique status and thusly an easy import into most markets outside of Europe. This is a genuine Porsche 911 2.7 RS Touring from 1973! One of only 1306 Touring RS made. Original European RS Touring from second owner with original mileage from new. First owner was the director of “Momo” Italy known for the special leather interiors and steering wheels. Second and last owner was a serious German collector who owned the car for a long period. Rare and original colour, only 18 were made in this beautiful “Sepiabraun” colour! This stunning throughout example has been fully restored and mechanically rebuild some years ago in Germany by well known Porsche specialists with eye for detail and originality. Fitted with genuine and rare “Recaro” S Sport seats. Of course Matching Numbers. Mechanically 100% and therefore in a perfect working and driving condition. Extensive history and restoration file available. Must be one of the best RS Touring’s available on the open market. TOP quality example for the serious collector!

Check for more photos and information on the car HERE.