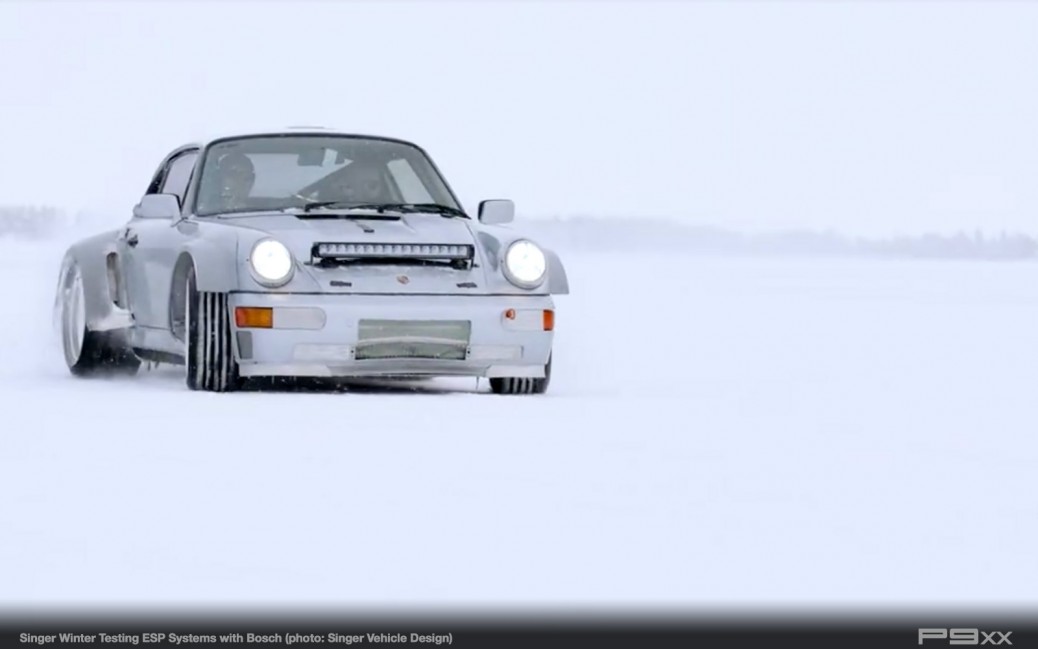 We’re not the gambling type, but if someone bet against Rob Dickinson and the Singer team not feeling the need to up the ante every time someone refers to their cars as just another backdate… well, we’d take that bet in a heartbeat. One need only witness this latest video from the firm showing winter testing of an ESP system to drive the point home.

We’ve been fans of the SoCal Porsche 911 builder for a longtime. We loved them when they were building “plain jane” old Singer flavored builds on 964s. To those keeping count, that was before they started doing Targas, Carrera 4s and cars with rally lights, minilites and Mulholland Drive stripes.

Folks had heard about a “special project” from Singer for a while. In fact, it was one of the “worst kept” secrets in automotive journalism. We say that because everyone who seemed to have a tie to Singer had heard about it, and hinted at it as likely one of the Singer boys or girls had hinted to them.

Even still, when the first renderings of the Singer team’s Dynamics and Lightweighting Study (DLS) came forth, I doubt folks considered it would be so intense. To say it took engineering the original 911 concept to a whole new place was an understatement. An all-new lightweight shell, a ground-up re-engineering of what a flat six might be… these were all insanely impressive things. Pairing with Williams Formula 1 opens doors, and man did those doors open with the DLS. We’ll be honest though, we’re maybe even more impressed by this latest video. Here, another badass looking DLS test mule wearing much of its original 964-based design cues is seen testing  at Bosch’s winter test facility in Sweden. The ESP system it’s testing is decidedly less sexy than most of the visual or performance details highlighted in the many renderings of the DLS study. That Singer is taking the time to retrofit and fully sort dynamics stability in an air-cooled 911 with OEM experts though… that’s pretty monumental and we’re pretty sure it’s never been done before… not in an old 911 certainly… and likely not ever.

What we love about Singer is their never-ending push to perfect their formula. In doing that, since those earliest days, they jumped into the world of “resto-modding” and redefined it. They’ve holistically and highly authentically up-cycled an icon, making it materially better for super rich and discerning customers, and wholly modern and yet approachable mechanically. They’ve inspired a raft of artisans and… yes… copycats in their wake, and continue to push harder and lead as a genre of up-cycled iconography sprouts around them. Singer doesn’t do so without controversy. To be honest, Porsche didn’t seem to know what to make of them in the beginning. Porsche traditionalists still don’t. 964 owners get split between those who get angry at Singer for basing their cars on Porsche’s last real hand-built 911, to praise for driving the 964 values up faster even than the blazing vintage Porsche market in general. We tend to side with the latter, having paid a premium for our own Project 964 but appreciating that a greater value means we can justify the costs of ownership and restoration without concern for losing our shirts.

One further optimistic view on Singer would be this. We believe they have had a direct hand in keeping the Porsche brand relevant and incredibly hot amongst a whole younger generation of car owners and enthusiasts. While muscle cars of the same era as the 911 long hoods that Singer harkens have begun to cool considerably at auctions, Porsches continue to be on the march. Young and old alike turn their heads and chase down Singers at car shows. That’s all before cars like the DLS study actually come to market with its engine and chassis designed by F1 engineers, or slide 30-degrees sideways controllably even for the casual driver thanks to considerable testing by Bosch.