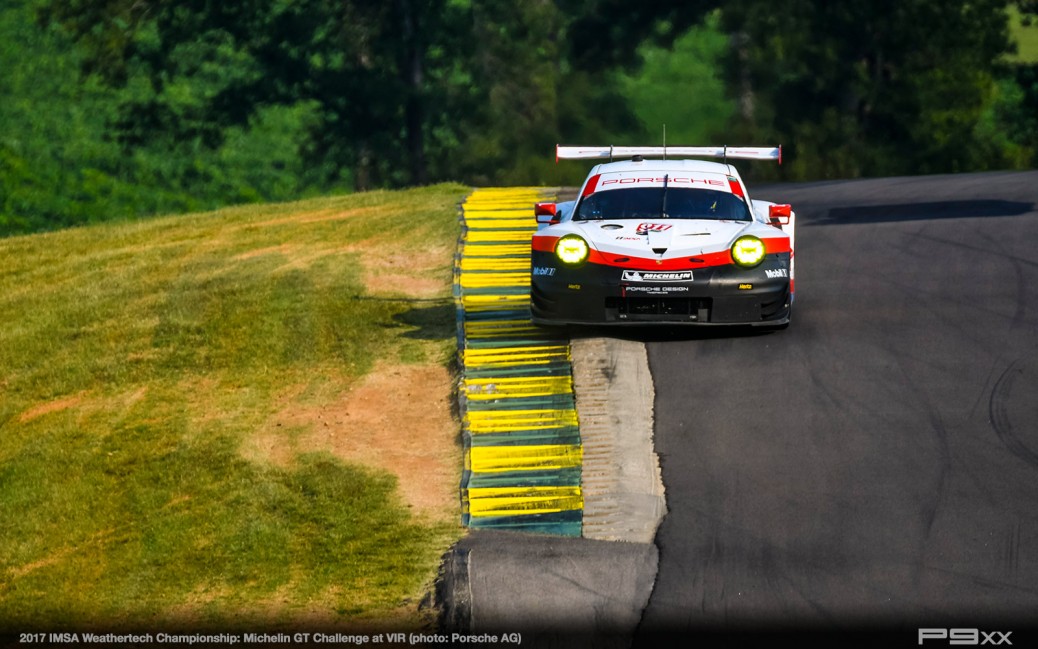 Stuttgart. After scoring the first victory with the new Porsche 911 RSR at Lime Rock and second place in Elkhart Lake, the Porsche GT Team was not able to fight for top positions on the Virginia International Raceway. At round nine of the IMSA SportsCar Championship, the team’s and drivers’ intensive preparations and good performances went unrewarded. After 92 laps on the storied 5.263-kilometre racetrack in the US state of Virginia, Laurens Vanthoor (Belgium) and Gianmaria Bruni (Italy) reached the flag in seventh place with the 510 hp Porsche 911 RSR (#912). Their team colleagues Patrick Pilet (France) and Dirk Werner (Germany) finished eighth in the second 911 RSR with the starting number 911.

The tenth and penultimate round of the IMSA SportsCar Championship will be contested on 24 September at Laguna Seca in the US State of California.

Comments on the race
Marco Ujhasi, Director GT Factory Motorsports: “After the qualifying it was obvious that the race would be difficult for us. Because we have a significantly lower top speed than our opponents, we had to come up with a special strategy on this track with its long full-throttle passages. However, for our strategy to work, we needed safety car phases, and there weren’t any today. We tried everything, but all in all it was a very difficult weekend for us. I hope that the IMSA authorities will take a very close look at this race and draw the appropriate conclusions. Then I’m confident that we’ll be back up amongst the frontrunners at the next race in Laguna Seca.”

Laurens Vanthoor (911 RSR #912): “That’s obviously not the result we wanted to fly home with. Our 911 RSR ran well and I had a good feeling in the car. Everyone could see that we didn’t have the pace, especially on the straights. The effect was particularly noticeable on this racetrack.”
Gianmaria Bruni (911 RSR #912): “Aside from the lack of top speed, the race for us ran without any problems. The team worked well over the entire weekend. What came out in the end, however, is frustrating, but it’s no reason to hang our heads. As a team, we have to pull together again and do better at Laguna Seca.”

Patrick Pilet (911 RSR #911): “That was a difficult weekend. Especially for me because I made mistake in Corner 5 and I ended up in the grass. But even without this setback, we were still simply not fast enough.”
Dirk Werner (911 RSR #911): “As expected, the race was difficult. As always, we were well prepared. But our pace was not good enough, especially on this racetrack, where our lack of engine power was particularly noticeable. For the time being we have to accept this, but I hope the situation looks better again for the last two races.”

See the full P9xx photo archive of this race HERE.