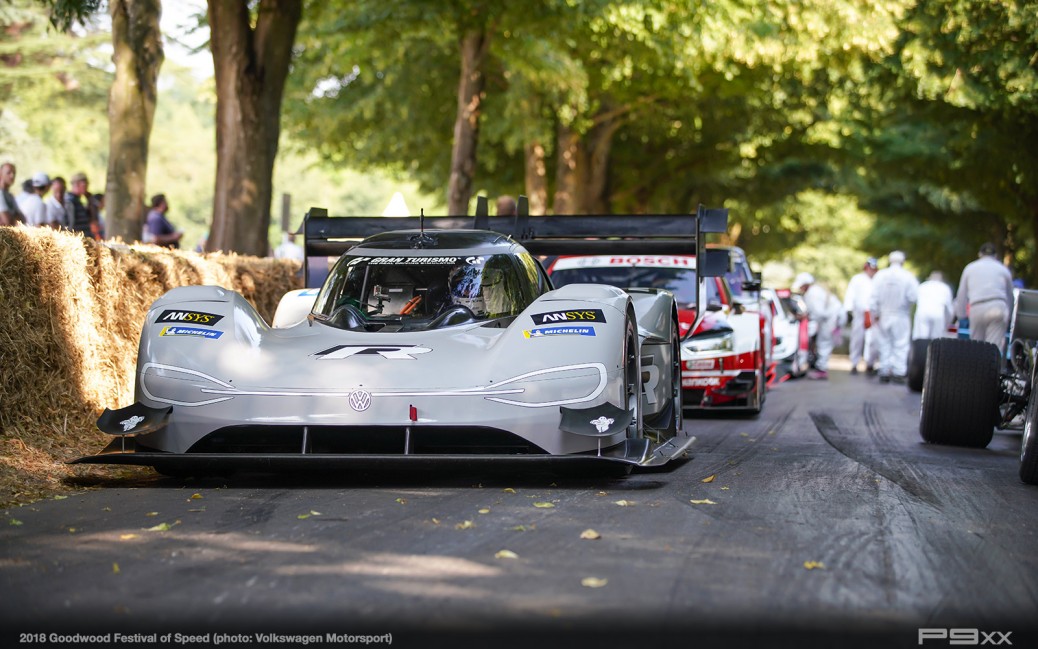 Memories of victory at the Pikes Peak International Hill Climb are still fresh: Volkswagen made motorsport history on 24 June, when Romain Dumas (F) and the I.D. R Pikes Peak set a new all-time record of 7:57.148 minutes at the most famous hill climb in the world. From 12 to 15 July, the pursuit of records continues at the 2018 Goodwood Festival of Speed. The iconic motorsport event is the largest event of its type in the world and is celebrating its 25th birthday this year. More than 200,000 visitors from all over the world are expected to flock to the south of England for this unique homage to motorsport.

The I.D. R Pikes Peak is making its competitive debut in Europe at Goodwood. Volkswagen’s first fully-electric racing car is the sporty ambassador for the I.D. family. “I am really looking forward to getting back behind the wheel of the I.D. R Pikes Peak at the Goodwood Festival of Speed,” says Dumas. “The race in Duke of Richmond’s estate is a very special event that is steeped in tradition. The best drivers in the world line up in some legendary racing cars in a great atmosphere. The I.D. R Pikes Peak may still be very young, but the record-breaking run on Pikes Peak has already made it a ‘living legend’.”

“It is a great honour for us to take part in the Goodwood Festival of Speed,” adds Sven Smeets, Volkswagen Motorsport Director. “I still get goosebumps when I think about the magnificent success on Pikes Peak. However, that race is history now. We are looking ahead and looking forward to showing European fans the I.D. R Pikes Peak. Our brand has dedicated itself to electromobility, and we want to show everyone how emotional this topic can be, before the first Volkswagen range with fully-electric drive is launched in 2020.” Hill instead of mountain: hunting down record for electric cars at Goodwood
Volkswagen and the I.D. R Pikes Peak have their sights set on the next record at Goodwood: the record for electric cars. In 2013, Jonny Cocker (GB) set a new fastest time of 47.34 seconds for the iconic Goodwood Hillclimb in a Lola-Drayson B12 69/EV. The all-time record is held by former Formula 1 driver Nick Heidfeld (D). Back in 1999, he covered the short 1.86-kilometre route in 41.6 seconds at the wheel of a McLaren-Mercedes MP4/13 Formula 1 car.

For the plan to come to fruition, Volkswagen Motorsport is currently having to perform a logistical tour de force: after the record-breaking run at the Pikes Peak International Hill Climb, the I.D. R Pikes Peak was prepared as quickly as possible for transport to Europe. It only arrived home in Hannover by air freight a few days ago. The electric racing car is now undergoing further preparations in Hannover, before heading to the south of England to take on its latest challenge. A race against time for the Volkswagen Motorsport team.

Also in action at Goodwood: the 1987 Twin-Golf Pikes Peak
Volkswagen Motorsport has plenty to offer visitors to this year’s Goodwood Festival of Speed: as well as the I.D. R Pikes Peak, the Twin-Golf Pikes Peak from 1987 will also take part in the race on the Goodwood Hill. Hans-Joachim “Strietzel” Stuck and Jochi Kleint will share the driving duties in the 480-kW (652-PS) twin-engine racing car. As with the I.D. R Pikes Peak, the engineers opted for a solution with two drive sources when developing the eye-catching Golf. The I.D. R Pikes Peak features two electric engines, which generate a system performance of 500 kW (680 PS). As well as taking on the hill climb, the two cars will also be on display in the paddock, while the drivers will be available to meet fans and sign autographs.