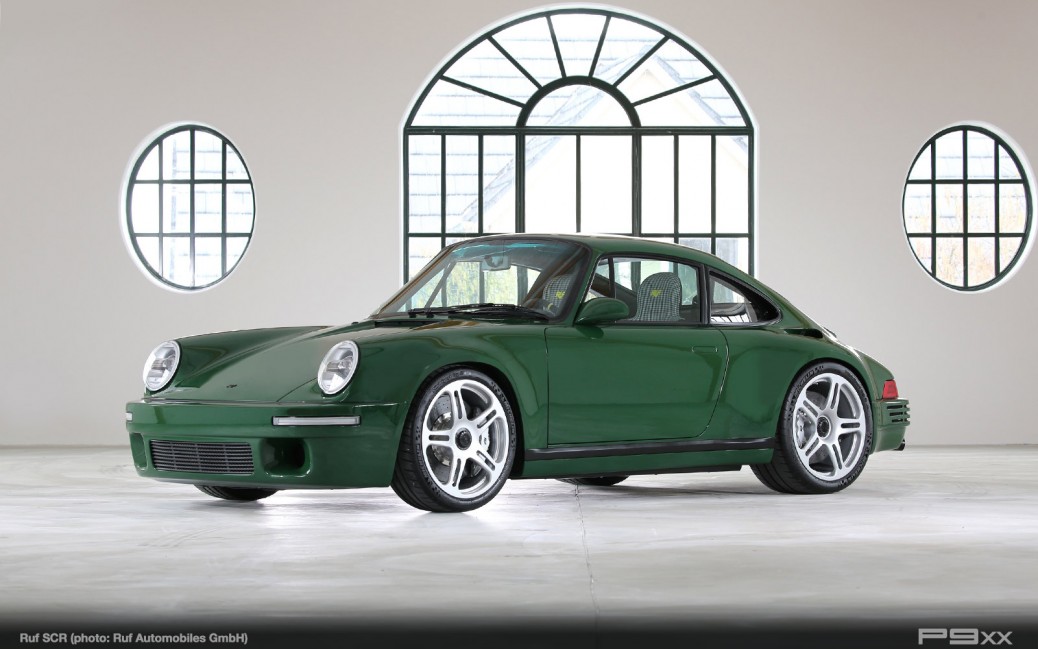 Ruf Automobiles has released a second offering on its monocoque “911” chassis. Following up on last year’s CTR 2017 reinvented Yellowbird, the niche Porsche-based automobile manufacturer has now brought a re-inveneted SCR to the 2018 Geneva Motor Show.

The car’s carbon monocoque chassis with full integrated roll cage is just the start of the technical tour de force here. This new SCR is powered by a 4.0-liter Mezger flat six producing 503 bhp and 347 lb-ft of torque. It can be paired with either a 6-speed manual from ZF. There’s a pushrod suspension on both axles and the entire package weighs in at just 2866 lbs.

The Irish Green form of the SCR 2018 is quite obviously familiar, very obviously based on the proportions and size of the original 911. Even still, key details have been updated and augmented… and most interestingly by noted former Audi, Ford and Chrysler automotive designer (not to mention R-Gruppe founding member) Freeman Thomas.

Though Thomas’ work for other brands is what he’s most known for, cars like the first-generation TT that obviously captures the spirit of the Porsche brand in many ways, it’s less known that he also worked at Porsche in his earliest years. His own personal collection also includes an ex-Rallye de Monte Carlo 356 competitor and his 1969 tangerine 911 that’s been converted to a factory lightweight.

Speaking to Thomas’ expertise in design, you’d be hard pressed to notice that the SCR’s exterior dimensions have been most thoroughly modified from the original 911. The front overhang has been shortened by 20mm and the rear by 50mm. That 70mm is now found in the car’s wheelbase. At the same time, the track grew by about 190mm, roughly the same as a 959. Along with those, the aerodynamic design has also been highly improved. According to Thomas, “The door section is really important. Even though the glass planes are in the same location, the shoulder has an extra 30mm. It’s just a gorgeous section. When you look at the original car it looks almost too flat now.”

Just as the exterior has been subtly and yet radically changed, so too is the interior. Look past the familiar and tasteful houndstooth fabric on the fixed back racing seats and you’ll find a fully adjustable steering rack. There are airbag systems built into the integrated roll cage, but all hidden from view.

All told, the SCR 2018 manages the perfect balance. It is one part technical masterpiece, one part lustworthy bespoke exotic, and finally one part credible and familiar successor to the 1978 G-body original SCR.

PRESS RELEASE: RUF SCR
[source: RUF Automobiles GmbH]
At the 88th Geneva International Motor Show, the sports car manufacturer RUF presents their traditional keystones based on today’s trendsetting technology: the new RUF SCR 2018. More power, less weight, more safety features and in addition to this, the peerless presence of a four-litre normally aspirated engine with 510 hp – the new SCR is our characterful answer to the desire for a pure, undiluted driving pleasure in a world without compromises.

A look back in time: the name SCR stands for a 40 year lasting tradition in the history of the brand. The SCR had its premiere in the year 1978 and immediately it impressed the critical experts of the well- known German car magazine Auto Motor und Sport who stated: “Power, everywhere you step!” The published test in the issue #13/1978 was greatly acknowledged in the motoring scene back then.

The original SCR was driven by an engine with six cylinders, 3.2 liter engine displacement and maximum power uprated to 217 hp. The standard engines delivered 180 hp. The SCR carries a large front spoiler with round brake-cooling ducts plus an integrated oil-cooler. At the rear, a whale-tail spoiler was fitted to the engine lid to ensure balanced aerodynamics.

38 years later RUF tied in with this traditional know-how for their well-known, extraordinary performing cars and presented a stunning, new prototype at the 86th International Motor Show in Geneva. This driving machine evolved out of nothing else than the DNA of a species which helped to make the original SCR change the world of sports cars.

This deep feeling of driving pleasure was the motivation to spend another two years of development and testing of the prototype. RUF wanted to create a unique, state-of-the-art, gentleman-driver sports car for those who prefer the soundtrack of a normally-aspirated engine. The result: our brand new “RUF SCR 2018”. The new car has a carbon fibre monocoque chassis and a full carbon fibre body-shell reinforced by an integrated roll cage (IRC). The push-rod suspension on both axles allows the powerful, normally- aspirated 6-cylinder boxer-engine, with a displacement of 4.0 liters, to exploit the car’s potential to the full. Now 510 hp meet less than 1300 kg of weight packaged in an elegant, state-of-the-art carbon fibre suit.

The sports car manufacture RUF is proud to present to you their latest evolution after more than four decades cultivating a tradition for building exciting, safe and pure sporty automobiles: The new RUF SCR 2018. Never forgetting our roots and for 40 years we have stayed loyal to our traditions.