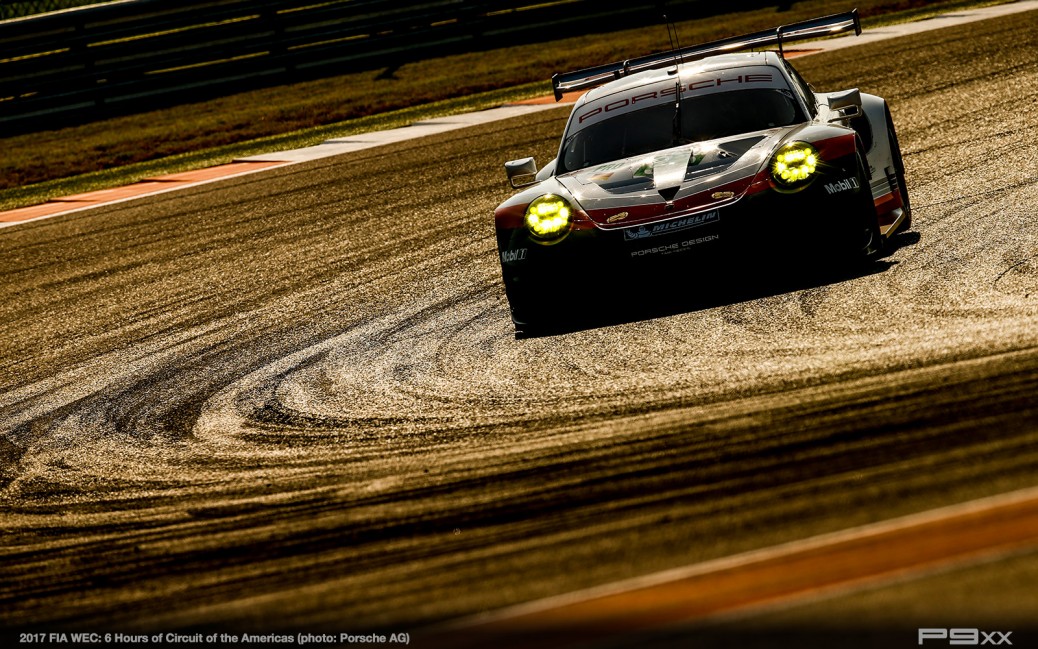 Stuttgart. At the six-hour race in Austin, the newly developed Porsche 911 RSR put in a spectacular chase through the field. At Saturday’s race on the Circuit of the Americas, Michael Christensen (Denmark) and Kévin Estre (France) ploughed their way from the last grid spot to finish second in the fiercely contested GTE-Pro class with the 510 hp racer from Weissach. They were just five seconds shy of clinching the first victory in the Sports Car World Endurance Championship season. For the pair, this marked the best result of the season so far. In a gripping heat race with temperatures reaching 35 degrees Celsius, their teammates Richard Lietz (Austria) and Frédéric Makowiecki (France) were thrown back by two drive-through penalties. Driving the second 911 RSR fielded by the Porsche GT Team, the two finished on sixth place.

The 911 RSR put in a brilliant start on the 5.513-kilometre Grand Prix circuit not far from the Texas capital. Kévin Estre, who had to take up round six of this year’s WEC from the back of the GTE-Pro field after a difficult qualifying session, immediately overtook four competitors and returned after the first lap running in fourth. Starting from the seventh grid spot, Frédéric Makowiecki stayed glued to his bumper and gained two positions. After the first safety car phase in the third hour of racing, Kévin Estre swept into the lead with a spectacular overtaking manoeuvre.

Despite having to relinquish the lead, the #92 Porsche 911 RSR remained on course for a podium result over the rest of the race. Delivering a strong performance and a swift pit stop in the closing phase of the race, Michael Christensen moved into second place. Suddenly, the first victory for the new 911 RSR in the Sports Car World Endurance Championship WEC seemed imminent. However, at Austin victory remained just out of reach. After 167 thrilling laps, the vehicle was just a little over five seconds off winning in the heat of Texas. Nevertheless, the completely new 911 RSR designed by Porsche Motorsport for this season on the basis of the high-performance 911 GT3 RS sports car, still notched up its fifth podium result at the sixth round of this year’s WEC.

The team colleagues Richard Lietz and Frédéric Makowiecki could not be a part of the fight for podium spots. Despite all their efforts, two drive-through penalties – for a breach of the circuit boundary line and due to a wheelspin while leaving the pits – cost time which they could not regain with the #91 Porsche 911 RSR. Regardless, sixth place was enough for them to defend their second rank in the GT Drivers’ World Championship.

Round seven of the Sports Car World Endurance Championship WEC will be contested in Fuji/Japan on 15 October. Marco Ujhasi, Director GT Factory Motorsports: “This is a sensational result. Our number 92 racer took up the race as a backmarker and missed out on winning by a few seconds. That showed a strong team effort. Our systematic preparations for the race paid off. We’ve still obviously got a lot to do. We’ll keep up the hard work and we’re looking forward to the rest of the season.”

Michael Christensen (911 RSR #92): “That’s our best result of the season so far and I’m really thrilled about it. Everything came together perfectly today – the car, the strategy, and neither driver nor team made a single mistake. That gives us a lot of confidence for the rest of the season.”

Kévin Estre (911 RSR #92): “What a crazy race. Never in our wildest dreams did we expect to finish on second after such a difficult qualifying. We did our utmost today and didn’t make the slightest error. With a little luck, we could have won. Still, I’m happy with this result and proud of the team. Once again, the crew gave us great support.”

Richard Lietz (911 RSR #91): “Congratulations to my teammates in the number 92 racer. They went their own way with the setup, and that proved to be the right choice. I take my hat off to them! For us the race was very tough with a lot of setbacks. Still, we’ll learn from this and we’ll be back in the game at Fuji.”

Frédéric Makowiecki (911 RSR #91): “That was a really difficult race. I feel sorry for the team, because I was handed two drive-through penalties. The conditions today were very difficult. I tried to conserve the tyres as much as possible, but it didn’t help much. Somehow things didn’t run smoothly today.”