Roar Before the Rolex 24: Successful Test for 911 RSR 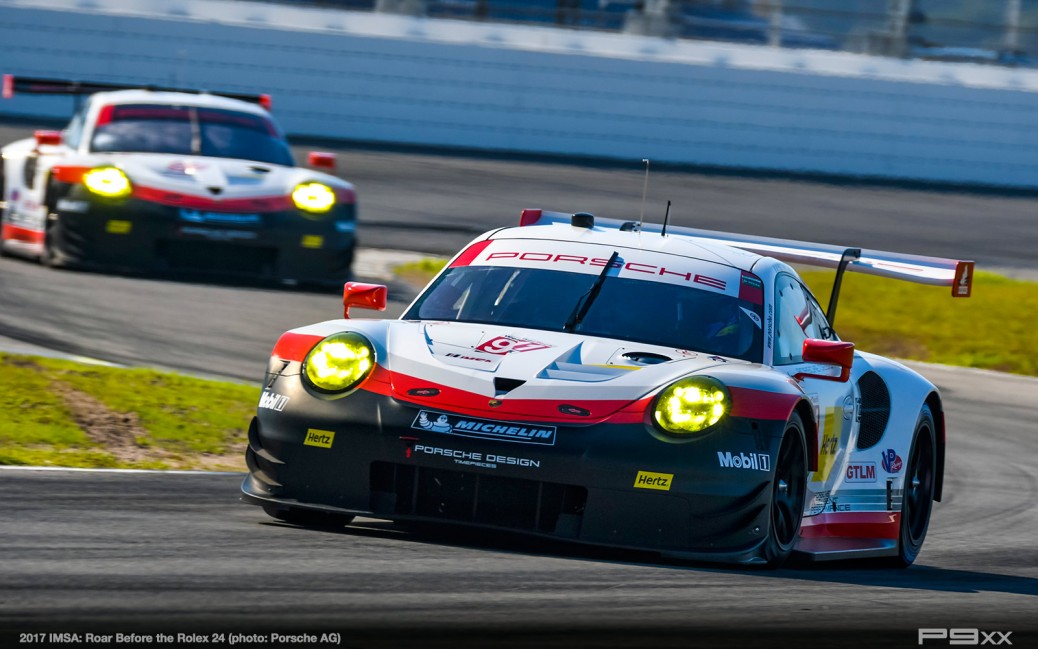 Stuttgart. The 2017 motorsport season can begin: The Porsche GT Team is well prepared for the 24 Hours of Daytona – the season-opening round of the IMSA SportsCar Championship in the USA and Canada. The factory squad used this weekend’s official test, “The Roar before the Rolex 24”, to setup the new 911 RSR for its race debut at the world famous long distance classic in Florida on 28/29 January. Under changeable weather conditions, the 911 RSR racers with the starting numbers 911 and 912 covered a total of 2,936 kilometres on the Daytona International Speedway, the legendary racetrack characterised by its fast banked corners and a tight infield. Six works drivers took part in the Daytona tests for the Porsche GT Team, as well as another five who will tackle the traditional season opener for various customer teams with the Porsche 911 GT3 R.

Many avid sports car fans witnessed the test drive of the new 911 RSR, which Porsche will campaign this season in both IMSA SportsCar Championship and the Sports Car World Endurance Championship WEC. The successor to the most successful GT race car of the last years, which secured no less than 22 victories and eight championship titles between 2013 and 2016, is a completely new development: the suspension, body structure, aerodynamic concept, engine and transmission have all been designed from scratch. Depending on the size of the restrictor, the motor, which is now positioned in front of the rear axle, puts out around 375 kW (510 hp). Thanks to the modern, lightweight normally-aspirated engine, the designers were able to install a particularly large rear diffuser. Combined with a top-mounted rear wing, the level of downforce and the aerodynamic efficiency were significantly improved.

Another new feature in the 911 RSR is the so-called “Collision Avoid System”. Even in the dark, with this radar-supported collision warning system, the faster LMP prototypes are detected early enough and misunderstandings can be avoided. A new safety cage concept and a new, rigidly-mounted racing seat further enhance driver safety. With the seat fixed to the chassis, the pedalry can now be moved and adjusted to fit the driver. Significant improvements have been made to the serviceability of the 911 RSR, which competes for the first time at Daytona with a new factory design: This has further developed the clear and dynamic design language of Porsche Motorsport. From a bird’s eye perspective, a hint of the Porsche emblem silhouette can be seen. The basic colours remain white, red and black. “The test kilometres that we covered over the last three days in preparation for the race were very important,” said Marco Ujhasi, Overall Project Leader GT Works Motorsport. “We managed to tick off all the points we’d scheduled for ourselves and now we have a much better understanding of the car on this racetrack. In addition, we experienced changeable and very diverse track conditions. It was dry and wet, warm and cold – precisely what you need in race preparations to be primed for all eventualities. We feel very well prepared for the race and the premiere of our new 911 RSR. In this respect, these three days in Florida were very successful.”