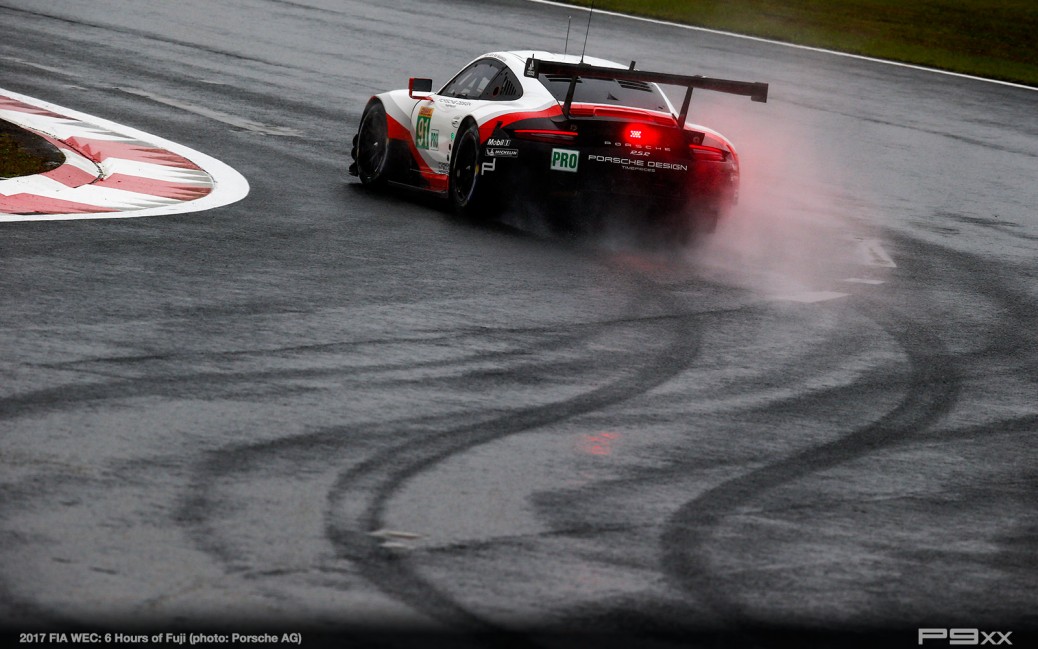 Stuttgart. In the qualifying for the Fuji six-hour race, Richard Lietz (Austria) and Frédéric Makowiecki (France) have secured their first pole position. In rainy conditions and poor visibility, they clocked the fastest lap time on the Fuji Speedway in their 510 hp Porsche 911 RSR. In the GT drivers’ world championship, the pair currently ranks second. For pole position they were awarded an extra point. This marks the second time that the 911 RSR, developed from scratch in Weissach by Porsche Motorsport for this season, starts from the first grid spot of the competitive GTE-Pro field in this year’s Sports Car World Endurance Championship WEC. The first pole position was set by Michael Christensen (Denmark) and Kévin Estre (France) in July at the Nürburgring. Driving the second 911 RSR fielded by the Porsche GT Team, the duo had to settle for the fifth grid place on the storied racetrack at the foot of Mount Fuji.

In the GTE-Am class, the 911 RSR run by Porsche’s customer team Dempsey Proton Racing takes up Sunday’s race from the second grid spot driven by Porsche Young Professional Matteo Cairoli (Italy), and his two German teammates Christian Ried and Marvin Dienst. In 2015, the team won the race on the Fuji Speedway. One of the 2015 drivers was Hollywood actor Patrick Dempsey, who this year cheers them on from the pit wall as the co-owner of the team.

Qualifying quotes
Alex Stehlig, Programme Manager WEC: “We’re very happy to have secured pole under these difficult conditions. The team performance was once again perfect today, everyone concentrated totally on the job at hand. We’re expecting rain for tomorrow’s race. This means that the conditions will be even more difficult. Today, we showed that we can cope well and therefore we have the best chances to win the race. We want to use this opportunity.”

Richard Lietz (911 RSR #91): “It’s a wonderful feeling to have achieved the second pole position of the season for Porsche. We didn’t really expect this because our car normally runs better in the race. We could certainly do with the extra point towards the championship. I’m thrilled for the team; they’ve worked very hard over the last days. As things look at the moment, our 911 RSR is very fast on a wet track. So we’re hoping for rain for tomorrow’s race.”

Frédéric Makowiecki (911 RSR #91): “The entire team deserves this pole. We’ve made the right decisions with the setup over the last days and we were rewarded for this today. Our tyre choice and the air pressure were perfect for these challenging conditions. Richard and I clocked very similar lap times, so which means we’re ready for the race.”

Michael Christensen (911 RSR #92): “That was a difficult qualifying. As the rain became heavier, I tried to set my fastest time in the first lap. However, I braked too late into the first corner and lost time. And the other laps were anything but ideal. Hopefully things go better in the race.”

Kévin Estre (911 RSR #92): “My first two laps were good, but unfortunately not fast enough. It’s a shame that we’re not starting from further up the grid tomorrow. But the race is long, and the conditions will probably be trickier. A lot will depend on the race strategy. Whoever gets that right will be able to go for victory.”