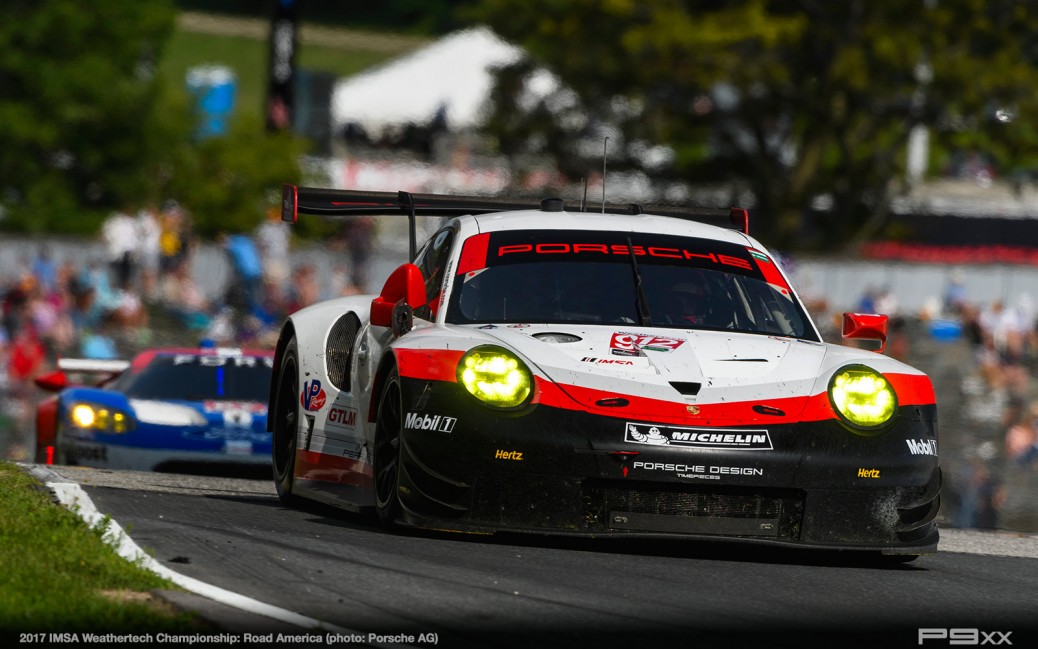 Stuttgart. The new Porsche 911 RSR continues on the road to success in the IMSA SportsCar Championship. A fortnight after its maiden victory at Lime Rock, the 510 hp racer from Weissach clinched second in the GTLM class in a heart-stopping finale on the legendary Road America racetrack. After the 2:40-hour race on the 6.515-kilometre circuit close to Elkhart Lake in the US state of Wisconsin, Laurens Vanthoor (Belgium) and Gianmaria Bruni (Italy) were a mere six-tenths of a second off claiming victory. The pair also scored second at Porsche’s double victory at Lime Rock recently. Their team colleagues and the winners of the Lime Rock race, Patrick Pilet (France) and Dirk Werner (Germany), lost ground after a collision in the final phase and ultimately had to settle for eighth. The Porsche GT Team fields the 911 RSR which was developed from scratch specifically for this season on the basis of the high-performance 911 GT3 RS sports car.

At the wheel of the #912 Porsche 911 RSR, Gianmaria Bruni initially managed to advance from fourth to third place. In his slipstream, Patrick Pilet even overtook two competitors in the #911 racer. The two held on to these positions until the first round of pit stops. For Porsche, the race remained rather unspectacular – until the last hour. Laurens Vanthoor, Gianmaria Bruni’s teammate, made the most of the short pit stop to snatch the lead. However, when the race went green after a safety car phase, he veered too wide and had to let the Ford past. In a gripping finale, he pulled out all stops and tried everything to reclaim the lead, but was ultimately pipped at the flag. For Dirk Werner, who took over from Patrick Pilet, the restart was even more dramatic: After falling victim to an accident involving a Corvette, he ended up in the gravel and was robbed of a good result. Round nine of the IMSA SportsCar Championship will be contested on 27 August at the Virginia International Raceway in Danville in the US State of Virginia.

Dr Michael Steiner, Board Member for Research and Development Porsche AG: “The Porsche GT Team missed out on clinching the second straight win by a fraction of a second on this fantastic racetrack. But once again, everyone put in a strong team effort. The IMSA SportsCar Championship is a blue ribbon sports car series. Fans witness gripping and fiercely contested races, especially in the GT categories. I found it interesting to follow the tremendous teamwork from the pits during the qualifying session.”

Marco Ujhasi, Director GT Factory Motorsports: “We kept improving over the whole race weekend. During practice we saw that we couldn’t match the pace of the fastest over a lap. So we concentrated on preparing for the race. That paid off. In the race we were up with the play until the end and we were in a position to fight for victory. Unfortunately it wasn’t quite enough. Still, we’re very pleased with the progress we’ve made over the weekend. It’s a shame that our number 911 racer was virtually kicked out of contention in a collision in the first corner after the restart. This cost us a lot of championship points. This car, too, was totally competitive today. We’ll be taking a lot of positive insights with us to the next round in Virginia. Until then, we’ll focus on the things that still need working on.”

Laurens Vanthoor (911 RSR #912): “What a rollercoaster race. We came into the pits earlier than scheduled prior to a caution phase, because we suspected we had a tyre problem, and that cost us the lead. We definitely had some luck on our side because there was nothing wrong with the tyres. After the restart, I wanted to overtake a slower GTD vehicle but he blocked me and that led to a mistake. It’s annoying to lose the lead and possibly even victory because of this, but such things happen. Nevertheless, finishing second on this tricky circuit is a good result.”

Gianmaria Bruni (911 RSR #912): “That was a really tough race. I got away well at the start but the Ford managed to overtake me in corner three. The team had worked out a great strategy, which Laurens implemented almost perfectly after the pit stop. Right up until shortly before the finish I thought we might win. But second place is a great result and a good motivation for the remaining races of the season.”

Patrick Pilet (911 RSR #911): “Our 911 RSR ran brilliantly again today, and the team provided great support. Unfortunately it just wasn’t our race. It’s a pity, because we were actually good enough to win at Road America, too, but we just couldn’t do it. Now we’ll try again in Virginia.”

Dirk Werner (911 RSR #911): “In the closing phase of the race we still had every chance open to us. After the final round of pit stops I was running in fifth and I wanted to overtake the Corvette in front of me after the safety car phase. But, while braking, he pulled to the left in the last moment and forced me into the gravel trap. He was given a penalty, but that didn’t do us any good. I’m pleased for our team colleagues in the #912 car and I hope that we can make more out of our good possibilities in Virginia.”

Jörg Bergmeister (911 GT3 R #73): “We had the speed over the entire weekend. The 911 GT3 R felt really good and Patrick drove a strong race. I had just overtaken an Acura and was running second when I had to pit with a puncture. Basically, that should have been the end of my race. But luckily the safety car came out again shortly afterwards, and our pit stop was super short compared to the competition because we’d only just refuelled. This put me back in second place.”

* These races count toward the North American Endurance Cup.

See the full P9xx photo gallery of this race HERE.