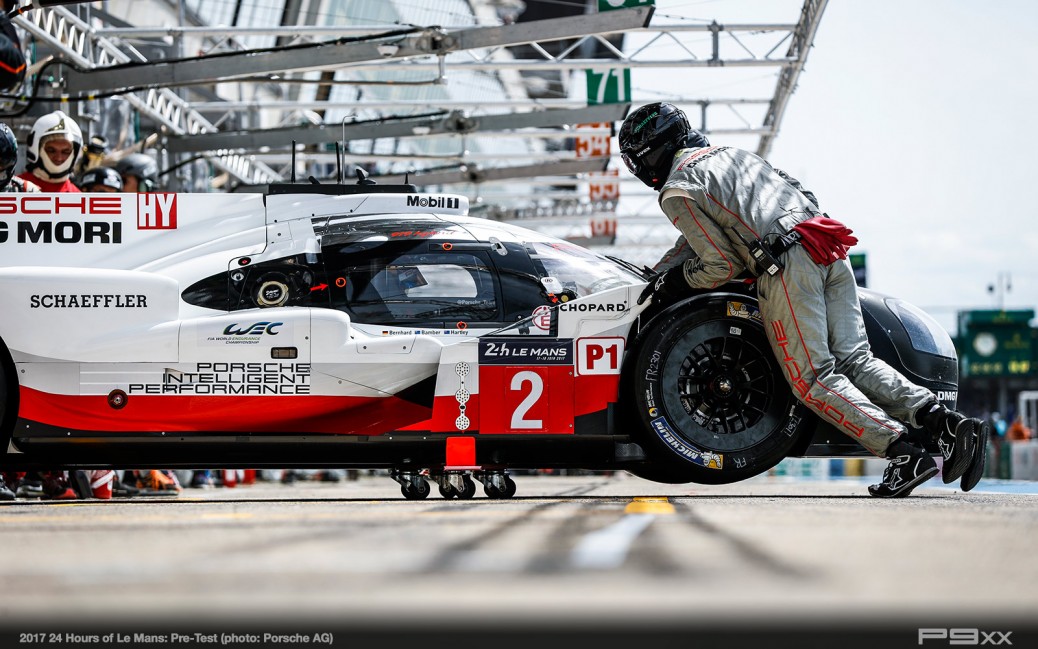 The best 2017 lap time of a Porsche 919 Hybrid at the official Le Mans test was 3:21.512 minutes which means an improvement by seven tenths of a second compared to the 919’s best test lap time in 2016. This was achieved despite restrictions enforced by new regulations concerning the aerodynamics in particular. The Porsche LMP Team refrained from simulating qualifying at the test and finished fourth and fifth quickest behind Toyota after eight hours of testing. Fritz Enzinger, Vice President LMP1
“Now Le Mans 2017 is on. The return to the Sarthe definitely brings back the nicest memories for us. Of course, we would like to follow up on these recollections. The test result is difficult to read as we stuck to our plan and focussed on race preparation. On Tuesday, we’ll have a roll-out with the Le Mans cars here on the Circuit Bugatti. Afterwards the majority of the team will be sent home to take a deep breath before we return and enjoy the hype at scrutineering next Sunday in the Le Mans town centre.”

Andreas Seidl, Team Principal
“We’ve had a mixed test day. We were focussing on race set-up and refrained from simulating qualifying. Although we didn’t achieve the mileage we wanted, we still learnt important lessons for the race regarding tyre choice and tyre wear. Toyota’s speed was impressive, we could not match that. In the coming days we will analyse today’s data and draw our conclusions to improve our cars’ performance. We unfortunately lost a lot of test time with our number 2 car. Due to an oil leak we had to change the combustion engine over lunch. At 3:38pm, after only two-and-a-half hours repair time, the car was back on track. What caused the leak is still to be analysed but the team did a great job. Now we go full throttle on the road to the Le Mans race week.”

Neel Jani (33, Switzerland)
“You can’t compare Le Mans to any other race circuit in the world, that’s why the test day is so important. At the beginning the track was extremely dusty, especially on the 9 km section where we use normal roads. But later we were able to conduct proper preparation.”

André Lotterer (35, Germany)
“The basics of our car was okay from the start which allowed us to work on our set-up list. We stayed on our programme and studied the performance of the tire over several stints. Compared to Toyota, we’re probably missing a little over a single flying lap – but then we didn’t attempt this ourselves.”

Nick Tandy (32, Great Britain)
“It is just amazing, to be with the 919 Hybrid back on track at Le Mans. I am so much looking forward to the race in two weeks time.”

Earl Bamber (26, New Zealand)
“For us it was a bit difficult today to find a good balance for the car. But I believe we know the direction we have to work towards now.”

Timo Bernhard (36, Germany)
“At the beginning the track was very slippery but then we found the right path with our set-up work. It would have been nice to get more time to fine-tune our 919 but the team worked very hard to change the engine. I had the impression there were more inexperienced drivers on-track than usual. Due to them not knowing the track well created some difficult situations.”

Brendon Hartley (27, New Zealand)
“Today we had lots of yellow flags and safety cars plus some home-made interruptions. In the morning I hit a bollard what caused some damage and cost time. Later we were in the garage for a long time to change the engine.”

Porsche 919 Hybrid reserve driver Marc Lieb (36), Germany)
“I’m very glad that the ACO made the participation of reserve drivers during the test day mandatory. It is a huge privilege to drive a fantastic car like the Porsche 919 Hybrid on a wonderful track like this. If necessary, I’m ready to step in but in favour of my colleagues, I hope this will not be required.”