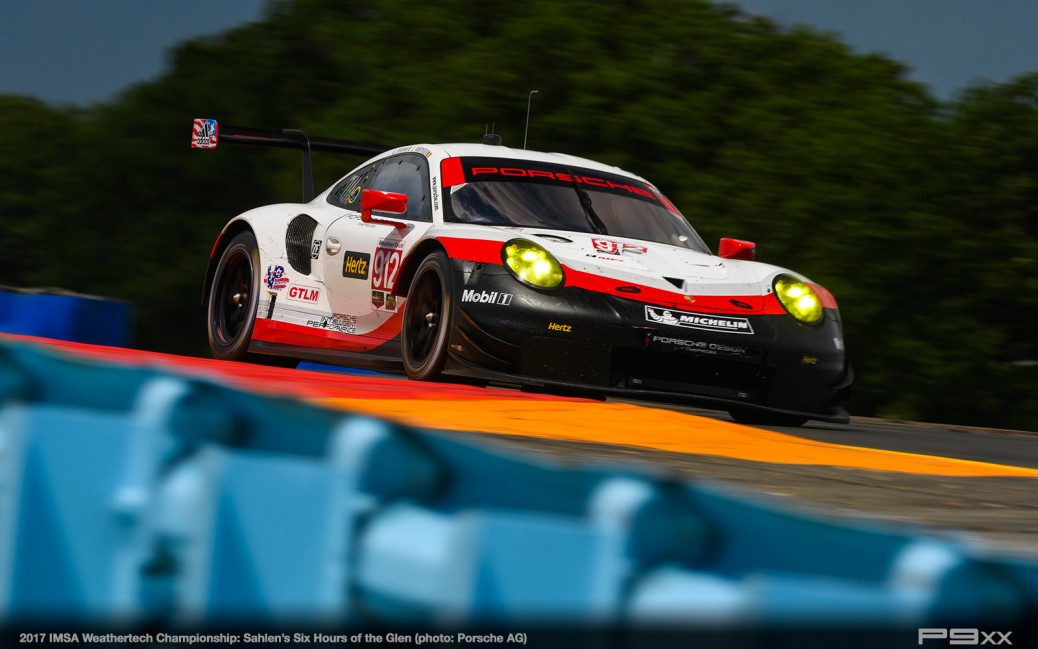 Stuttgart. That was not a race for the faint-hearted. Right up until shortly before the end of Sunday’s six-hour race in Watkins Glen, the battle for victory in the GTLM class was still raging. The new #912 Porsche 911 RSR was well-positioned in third place, just seconds behind the leader. However, the result of race five of this season’s IMSA SportsCar Championship was then turned on its head. Rather than being able to mount a final attack on the leaders, Gianmaria Bruni was forced to return to the pits due to a puncture. The Italian had looked like crowning his debut as a Porsche works driver with a podium, but he and team-mate Laurens Vanthoor (Belgian) ultimately had to settle for sixth place. In the second 911 RSR fielded by the Porsche GT Team, the # 911 car, Partick Pilet (France) and Dirk Werner (Germany) finished seventh. The fact that seven of the eight cars led the race on at least one occasion bears testimony to just how fiercely contested the GTLM class was once again in Watkins Glen.

The #911 car was well placed for much of the race at the iconic 5.472-kilometre Watkins Glen International circuit in the US state of New York. After the first hour of racing, Patrick Pilet, who started from fifth, had climbed into third place in temperatures as high as 30 degrees Celsius. A few laps later, he was running second. He handed the 911 RSR over to his team-mate Dirk Werner in second place. The German was still second at the halfway point of what proved to be an exciting and dramatic sports car classic, in which numerous yellow phases repeatedly caused the field to bunch together. But then it happened: he spun off the track in the chicane and damaged his rear-right tyre. Werner did manage to regain control of the 911 RSR in the run-off zone, which was a generous size at this section of the track, and was able to return to the pit lane. He did, however, lose a lap, and with it any hope of a top result. Laurens Vanthoor took responsibility for the start in the second 911 RSR, before making way for Gianmaria Bruni during the first pit stop after 34 laps. The new Porsche works driver completed his first race laps in the 911 RSR and was able to climb into fourth place. Laurens Vanthoor then enjoyed even more success: the Belgian took the lead for the first time after four hours. The scheduled pit stop just a few laps later did initially drop the #912 car back into fourth place, but Gianmaria Bruni soon got the car back on course for a podium, moving into third place in his second stint. With just two laps remaining, the leading trio was separated by a matter of seconds. However, before he was able to try his luck and mount an attack, the Italian’s hopes were dashed by a damaged tyre.

Round six of the IMSA SportsCar Championship will be contested on 9 July at the Canadian Tire Motorsport Park in Bowmanville/Canada. Comments on the race
Marco Ujhasi, Director GT Factory Motorsports: “The 911 RSR was set up very well for the race. We had banked on the temperature being hot, and that worked out superbly. We were very competitive today. However, we then made a mistake as a team and were also unlucky with tyre damage. You cannot do much about that, but the combination of factors was simply too much to win such a difficult race against such strong opposition. The pace was there. That was not the issue today. We will build on that and push hard again next week in Canada.”

Patrick Pilet (911 RSR #911): “That was not our weekend. We were running second when a mistake cost us the race. We were unable to make up the laps we lost. Maybe we might have had a chance of doing so if it had rained harder at the end. Despite this, we will look ahead, as the pace was good. We will drive in Canada in a week’s time. That circuit is very well suited to the 911 RSR. We saw that during testing.”

Dirk Werner (911 RSR #911): “I span in the chicane, after which the rear-left tyre was damaged. It is a shame that the race had to end like that for us. It was very unfortunate. The 911 RSR was running very well and the team worked hard to support us, as it always does. Everyone deserved a better result than that.”

Laurens Vanthoor (911 RSR #912): “We should really have been challenging for the win at the end. The 911 RSR had the necessary pace. However, everything suddenly went against us. We will now try to do better in Canada.”

Gianmaria Bruni (911 RSR #912): “I am both disappointed and happy at the same time. Disappointed because we had a lot of bad luck and did not get the result we deserved, despite a good performance. I am happy because we showed today what great potential we have as a team. It is a shame that two punctures and a drive-through penalty cost us what would almost certainly have been a podium. I overtook a GTD car, when I was suddenly shown the yellow flag. However, I was already past. I dropped straight back in behind it, but the stewards took a hard line. That was my first race for Porsche, and my first race after an eight-month break. I cannot tell you how much I have missed this feeling.”