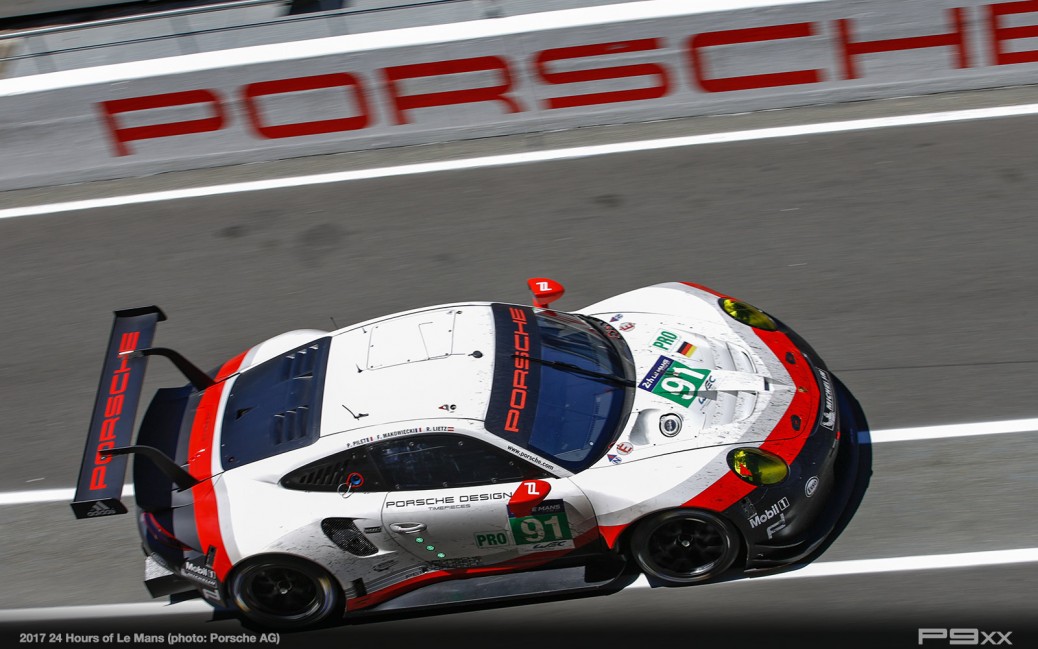 Stuttgart. The six-hour race on the Nürburgring on 16 July is the last event on European soil for the 2017 Sports Car World Endurance Championship. After the Nürburgring round, five overseas races will be contested in Mexico, USA, Japan, China and Bahrain. On the storied racetrack in Germany’s Eifel region, the Porsche GT Team fields two new 911 RSR in the GTE-Pro class, in which the fight for points and victories is the most cutthroat in the WEC. Thanks to the Balance of Performance, which was created to ensure that all vehicles of different concepts compete on the same performance level, fans will witness gripping fights for positions and thrilling races to the flag. The 510 hp 911 RSR racers were developed from scratch by Porsche Motorsport in Weissach and are based on the seventh generation of the iconic 911 sports car. The 911 RSR made a successful start to the season, clinching third at its maiden outing in Silverstone. At the 24 Hours of Le Mans recently, the new racer narrowly missed out on a podium spot, securing fourth after a strong performance and long stints in the lead.

The race
The Nürburgring is one of the most tradition-steeped racetracks in the world. Motorsport fans associate the Eifel circuit with the unforgotten 1,000-kilometre races on the legendary Nordschleife. The Sports Car World Endurance Championship  WEC is contested on the 5.148-kilometre Grand Prix circuit with its 16 corners. When the Nürburgring first hosted the race series in 2015, Porsche celebrated a double victory.

The Porsche drivers
Four works drivers compete for the Porsche GT Team: Richard Lietz (Austria) and Frédéric Makowiecki (France) share the cockpit of the #91 Porsche 911 RSR in the GTE-Pro class. They started into the season with third place at Silverstone. Their team colleagues Michael Christensen (Denmark) and Kévin Estre (France) man the #92 car. In the GTE-Am class, the Porsche customer squad Dempsey Proton Racing fields a 911 RSR from the 2015 model year. It is driven by the Porsche Young Professional Matteo Cairoli (Italy) as well as Christian Ried and Marvin Dienst from Germany. So far this season, they have achieved third place at Silverstone and second in Spa-Francorchamps. The Porsche 911 RSR
The 911 RSR, which celebrated its race debut at the Daytona 24-hour classic in January, is a completely new development: the suspension, body structure, aerodynamic concept, engine and transmission have all been designed in Weissach from scratch. Depending on the size of the restrictor, the motor, which is now positioned in front of the rear axle, puts out around 375 kW (510 hp). Thanks to the large rear diffuser combined with a top-mounted rear wing, the level of downforce and the aerodynamic efficiency were significantly improved.

The schedule
The six-hour race on the Nürburgring starts on Sunday, 16 July, at 13.00 hrs CEST.

Live on TV
Sport 1 broadcasts the race as well as start preparations and the podium ceremony live from 12.30 to 19.45 hrs. To set the mood, Porsche Motorsport Talk reports live from the Nürburgring from 11.00 to 12.30 hrs. Eurosport televises the last hour of racing from 18.15 to 19.15 hrs as well as the podium ceremony live. Free in its basic version, for a fee, the FIA WEC App offers a live stream of the entire race as well as live timing. As a prelude to its live broadcast from the Eifel, Sport 1 at 9.15 hrs televises Saturday’s first heat of the Porsche Carrera Cup Deutschland and Porsche Sports Cup, which runs as support to the WEC. Race 2 follows live from 10.00 hrs.

Comments before the race
Dr. Frank-Steffen Walliser, Vice President Motorsport and GT Cars: “It’s not only the fans who enjoy the race on the Nürburgring with its great tradition in long-distance events. The entire Porsche GT Team is very excited about our home race. When the WEC first raced here two years ago, Porsche celebrated an outstanding double victory. The Eifel circuit is the home track of our long-standing partner Manthey Racing, who will again run the WEC operations for us this season. We hope we can make the most of our home advantage and get a good start into the second half of the season at our races abroad.”

Marco Ujhasi, Overall Project Leader GT Works Motorsport: “We face two main challenges at the Nürburgring. Firstly, we have to see how quickly the team can adjust to the race after the long break following Le Mans, and how can we best optimise our procedures. Secondly, will we manage to find the best possible setup for our new 911 RSR for this demanding racetrack? On top of this, we have to be prepared for absolutely everything in the Eifel and make sure that we have the right tyres for all eventualities.”

Richard Lietz (911 RSR #91): “The Nürburgring is one of the most exciting racetracks on the calendar. The break after Le Mans was very long, and so we can hardly wait for the season to continue on our home turf. I won the WEC race here in 2015 with Michael. I’m sure a lot of Porsche employees will come this year to cheer us on. And we certainly want to give them a great race and, if at all possible, it would be fantastic if we could bring home our first win with the new 911 RSR.”

Frédéric Makowiecki (911 RSR #91): “The Nürburgring is Porsche’s home track. For this reason, this race is something very special for us. It also marks the end of the WEC’s European circuit, and for us it’s about securing a good starting position in the fight for the championship heading to the overseas races. At the WEC premiere at the Nürburgring two years ago we brought home a double victory for Porsche. It would be wonderful we could do this again.”

Michael Christensen (911 RSR #92): “I have only wonderful memories of the Nürburgring. In 2013 I won my very first race in the Porsche Mobil 1 Supercup as a Porsche Junior on this tradition-steeped circuit, and in 2015 I achieved my first WEC victory with Richard. I’m looking forward to returning to the Eifel and I hope that I can fight for victory again with my new teammate Kévin. I’d also be pleased if we could bring home a good result for the guys in our team. Most of them come from around here.”

Kévin Estre (911 RSR #92): “Le Mans was my home race, the Nürburgring is Porsche’s. Since I now live only an hour from the racetrack it’s a very special race for me, as well. I’m really looking forward to meeting the many fans and Porsche employees. I hope we can offer them an exciting race and thank them for their support with a good result.”

Balance of Performance (BoP)
The “Balance of Performance” applies to the GTE-Pro class of the WEC Sports Car World Endurance Championship as well as the GTLM class of the IMSA SportsCar Championship. “BoP” was introduced by the FIA ​​with the aim of achieving a level playing field for the different vehicle concepts, and thus ensuring balanced and fair races. The intention is that it should not make a fundamental difference if a vehicle is powered by a turbocharged or normally aspirated engine, or if the engine is mounted on the front axle or in front of the rear axle. The basic aerodynamic shape of the vehicles should also not play a decisive role. After an initial grading by the FIA, the balance of performance is adjusted at the races by means of telemetry – not only using lap times, but also acceleration profiles and engine mappings. This data input is automatically analysed and incorporated into the “Balance of Performance”. The most frequently used means of adjusting the performance level is through adding or subtracting weight. In keeping with the rule-makers’ intention, the key to success on the racetrack is not about the individual potential of a vehicle, instead it’s about the performance of the drivers, the race strategy, a perfect setup or the skill of the team with their pit stops.