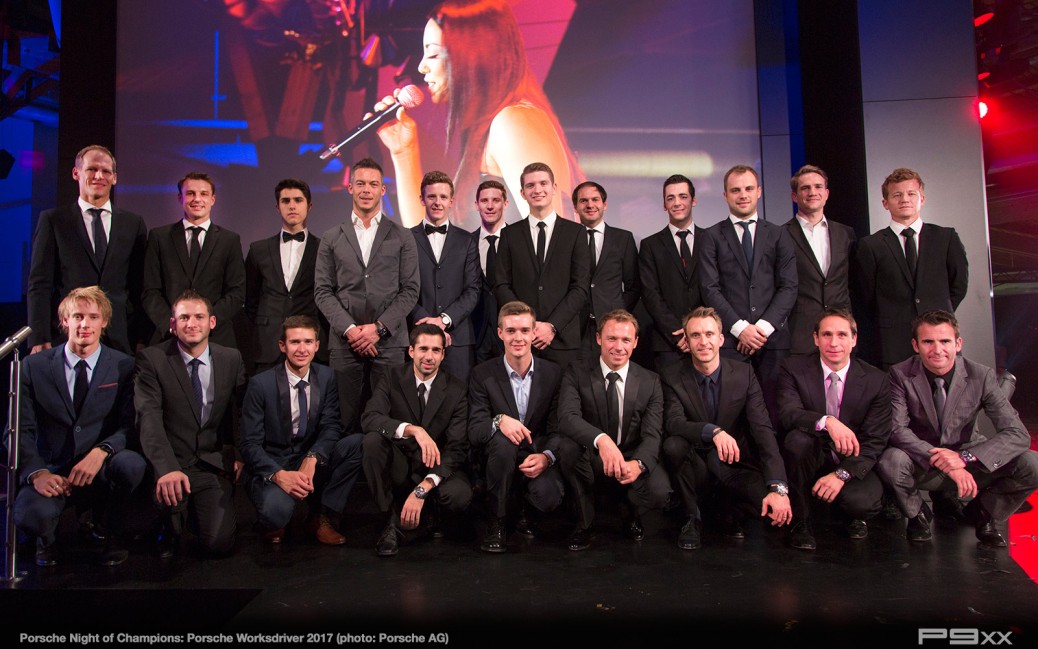 Stuttgart. Porsche has paid tribute to the outstanding achievements of teams and drivers during 2016 at the Night of Champions motorsport gala in Weissach. On this occasion, the new driver lineup for the 2017 season was announced.

919 Hybrid: New driver crews for starting numbers one and two
Porsche Motorsport LMP will return in 2017 as the defending champions to tackle the nine rounds of the FIA World Endurance Championship WEC. The two Porsche 919 Hybrids will again compete with the starting numbers one and two. The most significant change in both LMP1 racing cars can be found in the cockpit. After the departure of Romain Dumas, Marc Lieb and Mark Webber from the LMP1 driver lineup, three newcomers will join the crew. Two hail from Porsche’s existing factory driver squad: the New Zealander Earl Bamber (26) and Britain’s Nick Tandy (32). Both have already gained a wealthy of experience in the 919 Hybrid. In 2015, they joined forces with the Formula 1 pilot Nico Hülkenberg to contest the 24 Hours of Le Mans in a third Porsche LMP1 and clinched a commanding victory. The third recent addition, André Lotterer (35), has climbed to the top step of the Le Mans podium three times and was crowned champion of the WEC in 2012 as an Audi works driver. Lotterer and Tandy will share driving duties in the #1 Porsche 919 Hybrid with the reigning World Endurance Champion Neel Jani (32). Joining the two New Zealanders Earl Bamber and Brendon Hartley (27) in the cockpit of the #2 vehicle is Timo Bernhard (35) from Germany. Thanks to continuing development, next year’s 919 represents another step in its technological evolution, featuring a completely new colour design, an optimised aerokit, and the complete overhaul of almost all components. The vehicle will be officially unveiled on 23 March at the WEC prologue, which is held for the first time in Monza, Italy.

Three new GT works drivers
With Earl Bamber and Nick Tandy moving to the LMP division and the return of a factory squad to the FIA WEC, new drivers have been signed on. With Germany’s Dirk Werner (35), an experienced Porsche pilot climbs back into the cockpit of a 911. Werner competed in Porsches from 2004 to 2009, during which time he secured the title of the 2006 Porsche Carrera Cup Deutschland, won the GT title of the Grand Am Series in 2007 and 2009, and was awarded the Porsche Cup in 2009 as the best private driver. From 2010 to 2016 he competed for BMW as a works driver in various championships including the DTM and the IMSA Weathertech Sportscar Championship. Belgium’s Laurens Vanthoor (25) won the 2010 Macau Formula 3 Grand Prix, clinched the 2013 title in the FIA GT Series and went on to pocket victories in long distance racing: in 2014 at the Spa 24 Hours, 2015 at the Nürburgring 24 Hours and at the 12 Hours of Sepang, and the 24 Hours of Dubai in 2016. Two weeks ago the Audi pilot won the FIA GT World Cup in Macau. Sven Müller (24) has earned his promotion from Porsche junior to works driver. The German spent three years being trained by Porsche as a professional race driver and in 2016 took home the titles in the Porsche Carrera Cup Deutschland and in the international Porsche Mobil 1 Supercup.

Porsche works entry aims for 2017 FIA WEC GT World Championship titles
In addition to its LMP1 commitments, Porsche will also send a factory squad to the 2017 FIA WEC rounds to tackle the GT world championship titles for the best driver and the most successful manufacturer, which will be awarded for the first time. “This is a significant boost for our motorsport involvement and underlines that we have chosen the right platform with the WEC,” said Michael Steiner, Member of the Executive Board for Research and Development at Porsche AG. The Porsche Motorsport GT team will campaign a pair of new 911 RSR in the GTE-Pro class. The drivers confirmed so far for these seats are Michael Christensen (26), Frédéric Makowiecki (36) and Richard Lietz (32).

Porsche aims to win titles in the USA with two 911 RSR
For the fourth season, Porsche will take on the competition with a factory entry in America’s most important sports car series, the IMSA Weathertech SportsCar Championship. As in the FIA WEC, Porsche Motorsport GT fields two brand-new 911 RSR. Sharing the cockpit of the #911 vehicle are Patrick Pilet (35) and Dirk Werner (35). At the particularly long events such as the Daytona 24 Hours, the 12 Hours of Sebring, Watkins Glen and Petit Le Mans, the duo will receive support from Frédéric Makowiecki. The regular drivers in the number 912 vehicle are Kévin Estre (28) and Laurens Vanthoor, with Richard Lietz joining them for the four long-distance classics. The season-opening race is the 24 Hours of Daytona on 28 January.

Porsche restructures its youth development programme
Porsche complements its successful Junior Programme with another module: Thanks to their impressive successes in the brand trophy series, the Italian Matteo Cairoli (20) and Frenchman Mathieu Jaminet (22) receive continued funding and support as “Young Professionals”, assisting customer teams in their international GT racing campaigns. Three young drivers will be backed as Porsche Juniors in 2017: Dennis Olsen (20) from Norway and the Australian Matt Campbell (21) contest the Porsche Mobil 1 Supercup. GT rookie Thomas Preining (18) from Austria will take on the challenge of the Porsche Carrera Cup Deutschland.

Robert Renauer wins the Porsche Cup
The winner of this year’s Porsche Cup, the trophy for the world’s most successful private Porsche pilot, is a racing driver from Germany. Robert Renauer (31) was awarded the coveted trophy by Dr Wolfgang Porsche, the Chairman of the Supervisory Board at Porsche AG. In addition, Renauer takes home a Porsche 911 valued at 120,000 Euro. Thanks to his successes in the ADAC GT Masters, the European Le Mans Series as well as the 24-Hour International Endurance Series, he earned 7,355 points over the 2016 season at the wheel of various Porsche racers. For second place, Christian Ried from Germany can look forward to prize money totalling 30,000 Euro. Third-placed Daniel Diaz-Varela from Spain wins 25,000 Euro. The Porsche Cup has been awarded since 1970 and is based on an idea of Ferry Porsche.