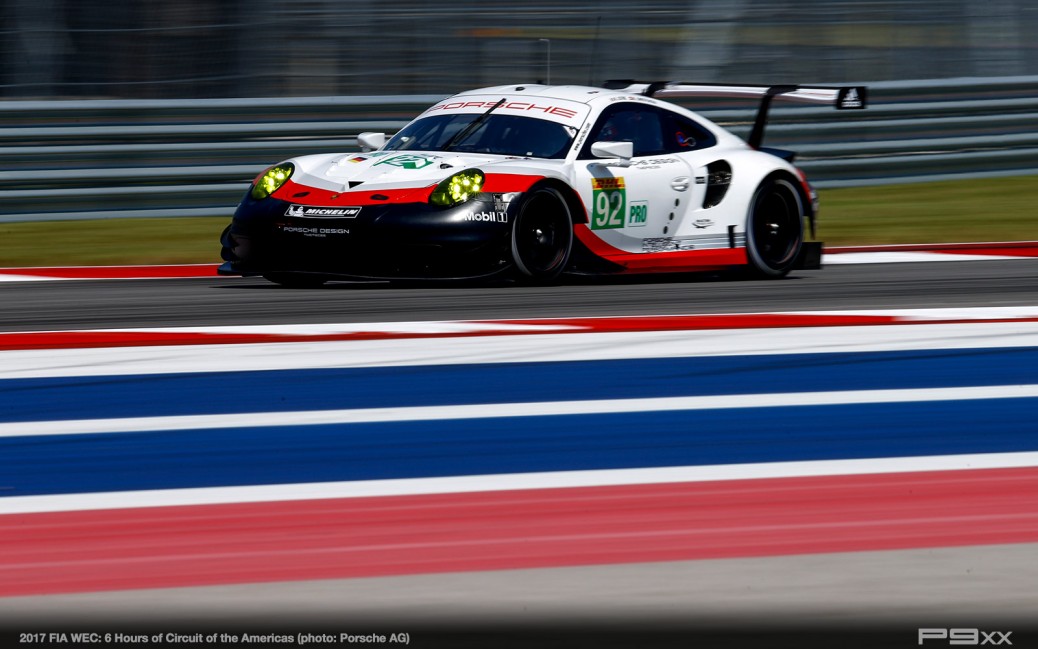 Stuttgart. The title fight in the Sports Car World Endurance Championship WEC heads into round six at the Circuit of the Americas in Austin on 16 September. The Porsche GT Team runs two newly developed 911 RSR on the 5.513-kilometre Formula 1 racetrack. With the 510 hp race car from Weissach, the team is eager to clinch the first win of the WEC season in Texas and also advance into the lead from second place in the drivers’ and teams’ classification. Due to the Balance of Performance regulation, which aims to achieve a level playing field for the different vehicle concepts and thus ensure balanced and fair races, the GTE-Pro class will again be particularly competitive in Austin. In the GTE-Am category, Porsche’s customer squad Dempsey Proton Racing takes up the race in Texas as the leader of the FIA Endurance Trophy with a 2015-spec 911 RSR.

The race
Austin is known for its motor racing – but even more for its music: No other city in the USA has as many clubs and bars with live music. The Texas capital on the Colorado River is a young, vibrant city, with 50,000 students attending the University of Texas alone. The Circuit of the Americas was built for Formula 1 and opened in 2012. In the last two years, Porsche secured two double GT victories on this varied and challenging circuit: in the WEC in 2015 and in 2016 at the American IMSA SportsCar Championship.

The Porsche drivers
Four works drivers compete for the Porsche GT Team at Austin: Richard Lietz (Austria) and Frédéric Makowiecki (France) share the cockpit of the #91 Porsche 911 RSR in the GTE-Pro class. Their third place in Mexico City recently put them on second place in the GT World Championship. Their team colleagues Michael Christensen (Denmark) and Kévin Estre (France) drive the second new 911 RSR with the starting number 92 in the GTE-Pro class. In the GTE-Am class, Porsche’s successful customer squads field two 911 RSR from the 2015 model year: Dempsey Proton Racing campaign the #77 car with the Porsche Young Professional Matteo Cairoli (Italy) as well as Christian Ried and Marvin Dienst from Germany. So far this season, they have achieved victories at the Nürburgring and in Mexico City, and they currently lead the overall classification of the FIA Endurance Trophy. In the #86 vehicle, Ben Barker and Michael Wainwright from Great Britain and Nick Foster from Australia compete for Gulf Racing. In Mexico, the trio scored third.

The Porsche 911 RSR
Porsche Motorsport built the 911 RSR a completely new development on the basis of the high-performance 911 GT3 RS sports car: the suspension, body structure, aerodynamic concept, engine and transmission have all been designed in Weissach from scratch for this season. Depending on the size of the restrictor, the motor, which is now positioned in front of the rear axle, puts out around 375 kW (510 hp). Thanks to the particularly large rear diffuser combined with a top-mounted rear wing, the level of downforce and the aerodynamic efficiency were significantly improved. The new RSR scored its maiden victory at the American IMSA SportsCar Championship race at Lime Rock on 22 July. The schedule
The six-hour race in Austin starts on Saturday, 16 September, at midday local time (19.00 hrs CEST). The TV channel Sport 1 joins the action live from 21.30 hours. The complete race can also be viewed free-of-charge via live streaming from 18.30 hours on www.sport1.de. On pay-TV, the race can be watched from 18.45 to 01.15 on Motorsport.TV. Eurosport telecasts the race live from 18.50 to 22.55 hrs and from 23.30 to 01.15 hrs. The FIA WEC app is free in its basic version, and offers live streaming of the complete race as well as the time-keeping for a fee.

Dr. Frank-Steffen Walliser, Vice President Motorsport and GT Cars: “In Mexico City we made a successful start into the second half of the WEC season with third place. We’d like to build on this in Austin and bring home another top result with the reliability of our new 911 RSR as well as a perfect driver and team performance. This would also keep the world championship title fight open and exciting. Porsche has been very successful on the demanding Circuit of the Americas in recent years. We want to continue this tradition.”

Marco Ujhasi, Director GT Factory Motorsports: “The Circuit of the Americas is a very interesting racetrack. It has slow and fast corners with makes it difficult to find the perfect setup. We’re expecting high temperatures so the tyres will play an important role. I hope that we can make the most of the free practice to line up on the grid with a 911 RSR that is perfectly prepared and set-up.”

Richard Lietz (911 RSR #91): “I very much enjoy racing in the USA. Austin in particular is a very interesting racetrack and we’ve celebrated several top results there over the past years. I hope that we can continue this tradition and bring home our first WEC win with the new 911 RSR against the strong opposition.”

Frédéric Makowiecki (911 RSR #91): “I’m looking forward to racing again in the USA. Austin is a great circuit. In previous years the race started in the late afternoon and we drove into the night. This time we’re contesting the entire race in the daytime. But I think we will cope well with the modified circumstances and be at least as competitive as we were recently in Mexico.”

Michael Christensen (911 RSR #92): “Driving in the USA is always great fun. And that is especially true for Austin. This circuit features very fast sectors with zones where you have to brake hard. It’s never boring there. We’re now very familiar with the new 911 RSR, and the team also know the procedures well. I hope that we can maximise this potential in Austin.”

Kévin Estre (911 RSR #92): “I look forward to this race all year. Austin is a fantastic city with a lot to do there and the Circuit of the Americas is one of the most interesting tracks on the calendar. I hope we find a good setup, and then we can run at the front with our 911 RSR. In any case, it’ll be an exciting event.”
Matteo Cairoli (911 RSR #77): “I have good and bad memories of Austin from my time in the Porsche Mobil 1 Supercup. In 2015 I won the rookie title as a newcomer on this great racetrack and in 2016 I lost the overall title there because of a defect. Now I’m looking forward to competing with the 911 RSR. It would be fantastic if we could clinch the third win of the season in the GTE-Am class after the Nürburgring and Mexico.”

Balance of Performance (BoP)
The “Balance of Performance” applies to the GTE-Pro class of the WEC Sports Car World Endurance Championship as well as the GTLM class of the IMSA SportsCar Championship. “BoP” was introduced by the FIA ​​with the aim of achieving a level playing field for the different vehicle concepts, and thus ensuring balanced and fair races. The intention is that it should not make a fundamental difference if a vehicle is powered by a turbocharged or normally aspirated engine, or if the engine is mounted on the front axle or in front of the rear axle. The basic aerodynamic shape of the vehicles should also not play a decisive role. After an initial grading by the FIA, the balance of performance is adjusted at the races by means of telemetry – not only using lap times, but also acceleration profiles and engine mappings. This data input is automatically analysed and incorporated into the “Balance of Performance”. The most frequently used means of adjusting the performance level is through adding or subtracting weight. In keeping with the rule-makers’ intention, the key to success on the racetrack is not about the individual potential of a vehicle, instead it’s about the performance of the drivers, the race strategy, a perfect setup or the skill of the team with their pit stops.