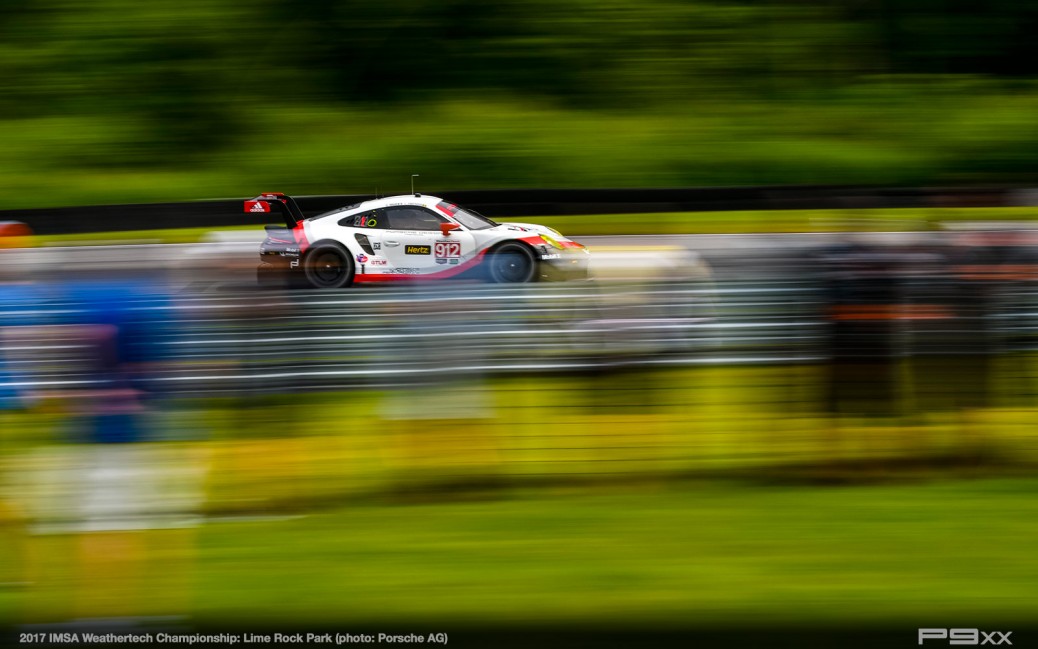 Stuttgart. A fortnight after its historic maiden victory at Lime Rock, the new Porsche 911 RSR now heads to its first outing on the legendary Road America racetrack on 6 August. The storied 6.515-kilometre circuit not far from Elkhart Lake in the US state of Wisconsin is regarded as the birthplace of American sports car racing. The Porsche GT Team tackles round eight of the IMSA SportsCar Championship fielding two 911 RSR in the extremely competitive GTLM class against BMW, Chevrolet and Ford. Based on the high-performance 911 sports car, Porsche Motorsport in Weissach designed the 510 hp 911 RSR for this season as a completely new development. Porsche customer teams tackle the GTD class with the 911 GT3 R, which rounded off Porsche’s triumph at Lime Rock with a second class victory after Daytona.

The race
Road America, which was opened in 1955 and is located halfway between Milwaukee and Green Bay on Highway 67, enjoys a long tradition. It is one of the oldest racetracks in the United States and one of the few circuits to have retained its original layout. It’s not surprising that it is called “America’s National Park of Speed”. With its long final straight and 14 corners, Road America is the longest circuit on the IMSA SportsCar Championship calendar and the most challenging. In 2015, Porsche celebrated a double class victory with the predecessor model of the new 911 RSR.

The Porsche vehicles
The 911 RSR, which clinched its maiden victory at Lime Rock on July 22, 2017, is a completely new development. Depending on the size of the restrictor, the motor, which is now positioned in front of the rear axle, puts out around 375 kW (510 hp). The level of downforce and the aerodynamic efficiency were significantly improved. The 911 GT3 R, mounted with the ultra-modern four-litre, flat-six engine with direct fuel injection, was designed by Porsche for worldwide GT3 series on the basis of the 911 GT3 RS production sports car. The more than 368 kW (500 hp) customer sports racer kicked off the 2017 season with a class victory at the 24 Hours of Daytona.

Comments before the race
Dr. Frank-Steffen Walliser, Vice President Motorsport and GT Cars: “Road America is a fast and demanding racetrack where the drivers make the difference. But to perform well they need a competitive and well set-up vehicle. And that’s exactly what we’ll give them with our new 911 RSR. We nailed our colours to the mast at Lime Rock recently by securing pole position as well as a brilliant double victory and even overall honours. I’m sure that after this fantastic success they’ll also do their utmost at Road America. Our team will again give them their full support.”

Marco Ujhasi, Director GT Factory Motorsports: “In order to be fully prepared for this race we went testing with two cars on the racetrack. Road America is a traditional street circuit with many fast corners and that makes it a challenge. It’s a difficult task to find a perfect setup for our 911 RSR and to ensure that we have the grip that’s needed for the slow corners. The insights we gained during testing will certainly help overcome these challenges.”

Sebastian Golz, Project Manager GT Customer Motorsport: “Road America is one of the fastest racetracks on the calendar. Spectators can reach almost every part of the track and they can witness up close how the GT racers push the limits of traction in the corners. After a strong performance at Lime Rock with victory for Park Place Motorsports and third place for Alegra Motorsports, our customer squads are again eager to finish at the front with the 911 GT3 R.”

Patrick Pilet (911 RSR #911): “Road America is a racetrack with loads of character and a long tradition. A great challenge. It’s fast and demanding, and the way it follows the contours of the surrounding hills reminds me a little of Spa. Of course at Road America I always think of 2015 when we had a fantastic race there. We started from the very back of the field and went on to win. You don’t forget such things. But Road America was my all-time favourite racetrack in America long before this sensational victory.”

Dirk Werner (911 RSR #911): “I think Road America is the most beautiful racetrack in the USA. It has everything a racing driver could wish for – long straights, fast and at times very unusual corners, hard braking zones. I celebrated my first win in the American Le Mans Series here. To return now as a Porsche works driver is something very special, especially after having just clinched our first victory at Lime Rock. With this victory, we’re now in a good rhythm and we’re determined to maintain this momentum for the rest of the season.”

Laurens Vanthoor (911 RSR #912): “Road America is a very difficult yet incredibly fascinating racetrack. It’s one of those old-school circuits with a great tradition that I love and that can only really be found in the USA these days. We went testing there with the 911 RSR, which will definitely have a positive effect on the final setup of our car for the track. What I like about Road America is that if you dare to hold off a bit longer before braking for the corners, you can easily overtake in some places.”

Gianmaria Bruni (911 RSR #912): “I turned my first laps with the 911 RSR at Road America during our extensive test programme here in June. They were wonderful days. I received a very warm welcome from the team and I immediately felt at home in the Porsche Motorsport family. Now I’m looking forward to returning to this great racetrack. I’d like to turn the many positive test experiences into a good race result. Since Lime Rock at the latest, we know that everything is possible with the new 911 RSR.”

Jörg Bergmeister (911 GT3 R #73): “Road America is my favourite circuit in the USA. It’s very fast, very hilly and very challenging – and it’s always guaranteed to provide gripping action and interesting fights for positions. It’s good turf for Porsche. We’ve pretty much always done well there in the past.”