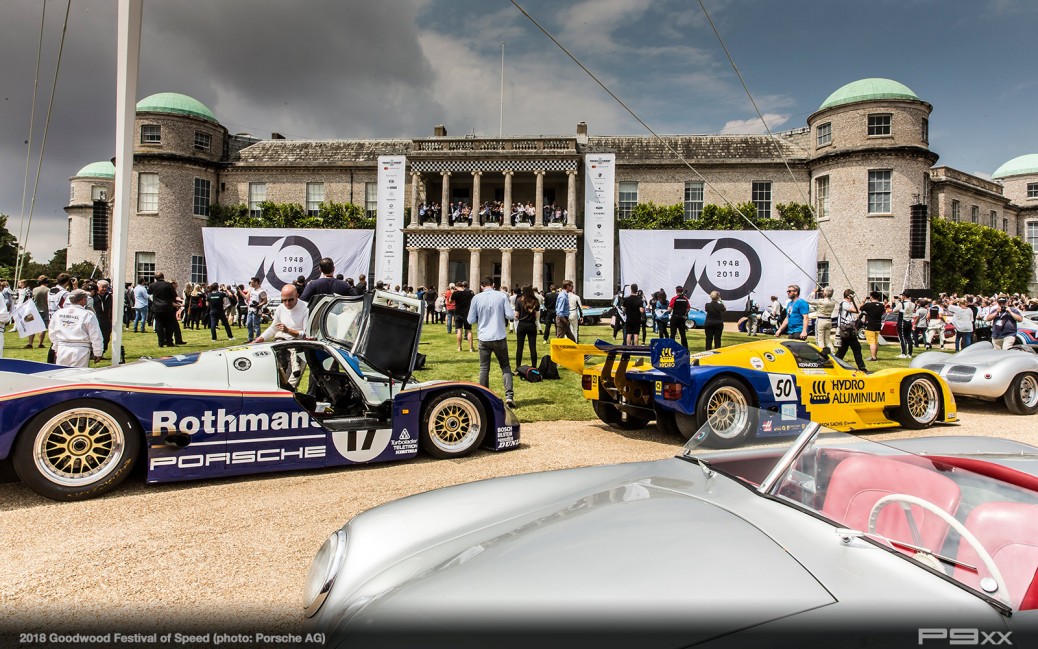 Did you know that you can balance six Porsche vehicles on a twelve-centimetre-thick steel peg, reaching a height of 52 metres? At the Goodwood Festival of Speed in this anniversary year, the Central Feature will see Porsche showcase not just one masterpiece of automotive invention, but a whole series of highlights from 70 years of sports car development. Porsche 935/78 “Moby Dick”
Did you know that the Porsche 935/78 won its first ever race, coming in a full seven laps ahead of the vehicle in second place? The “Moby Dick”, so named on account of its distinctive aerodynamics, generated a top speed of up to 366 km/h courtesy of the peak performance of 845 hp provided by its 3.2-litre engine with air-cooled cylinders and water-cooled four-valve cylinder heads. Although the Le Mans configuration actually offered “only” 750 hp. Porsche 962C
Did you know that the Porsche 962C can drive on the ceiling? With its pioneering ground-effect aerodynamics, delivered by virtue of the specially shaped air distribution channels in the sidepods and a closed underbody with diffusers, the vehicle creates a vacuum when driven. The vacuum has the effect of holding the vehicle to the road surface, which allows it to achieve previously unheard of cornering speeds. Off the back of their outstanding performance, the 965 and the 962 achieved an impressive seven Le Mans victories and three manufacturers’ world championships. Porsche 804 Formula 1
Did you know that the Porsche 804 Formula 1 was the first Porsche to feature a disc brake configuration? But even more exciting than the brakes was the car’s acceleration: With a type 547 Fuhrmann engine featuring eight cylinders and four overhead camshafts with vertical shaft drive, this 1.5-litre racing car achieved a remarkable 180 hp, powering it to a top speed in excess of 270 km/h. Porsche 911 Carrera RSR Turbo 2.1
Did you know that the 120-litre fuel tank in the Carrera RSR Turbo was located not under the bonnet above the front axle, but instead where the rear seats would have been? Not only was this configuration beneficial in terms of the vehicle’s centre of gravity, it also ensured consistent handling regardless of the fuel level. 911 Carrera 3.2 4×4 Paris-Dakar (953)
Did you know that the Porsche 911 Carrera 3.2 4×4 Paris Dakar type 953 was the first sports car to achieve victory in the famous desert rally? This all-wheel drive 911 made the 14,000-kilometre journey with a 3.2-litre engine that was nearly the same as the series-production configuration. A good 27 centimetres of spring deflection, double wishbones and two pairs of shock absorbers at the front, plus a reinforced rear axle with additional coil spring, made the vehicle much more suitable for offroad terrain than its series-production sibling. Porsche 2708 IndyCar
Did you know that the 2.65-litre V8 engine with twin turbochargers, designed by Hans Mezger, was the driving force behind the Type 2708 Indy-CART racing car? Its monocoque shell, formed from sandwiched layers of aluminium and plastic, was also new and was the perfect complement to the 750-hp performance.