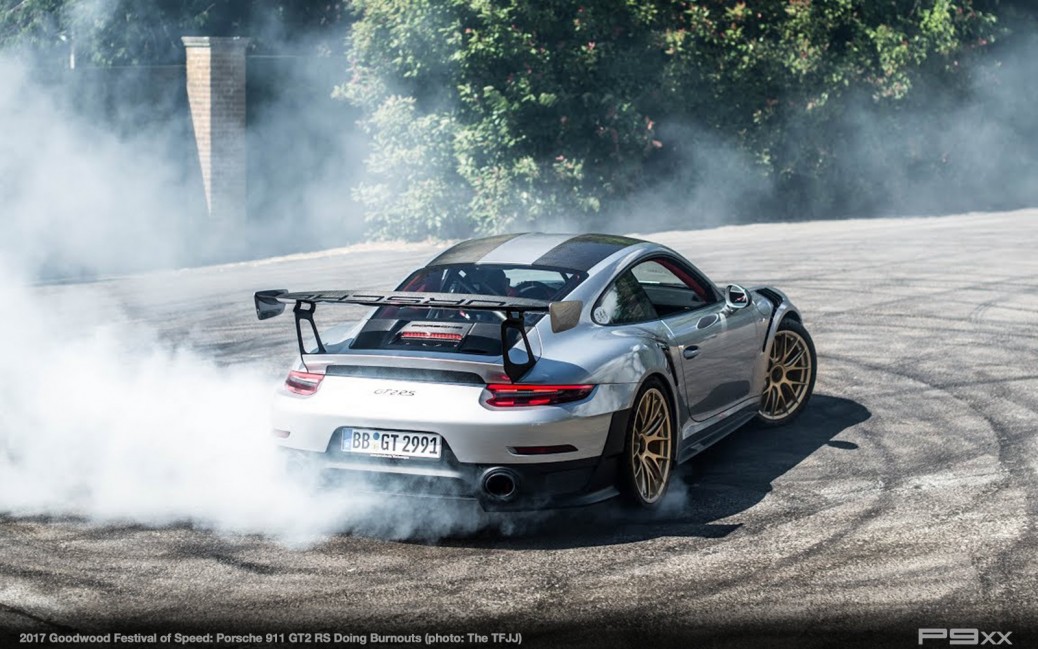 Okay, we’ll admit it. We squeaked the official Goodwood Festival of Speed video of the GT2 RS into our P9xx Video Channel section without much fanfare because it wasn’t **that** impressive. Yes, the new 911 GT2 RS is highly impressive in most every way, but mid-way up the hill when the driver attempted to do donuts… things just fizzled.

Likely this happened due to driver error, or perhaps lack of commitment. Still, by the second try at making the 911 GT2 do a smoky donut, the driver likely spotted the new 911 Turbo S Exclusive Edition rocketing up the hill toward him and made a hasty exit. The internet, never a demographic to be shy about casting judgement, obviously took this new GT2 RS to task over the situation. Well, consider the new car redeemed.

Apparently, that attempt up the hill in the Goodwood video wasn’t the car’s only try at entertaining with smoky spinning burnouts. We’ve found several views of the car doing a much better job at the task. There’s the video above by JBB013 Supercar Videos (above) that begins with the failed attempt from another angle, then ends with the view of the donuts.

Our second video comes The TFJJ on YouTube, and it’s even better. It skips the failed attempt and posts multiple successful attempts. The surprise hero though of the second video is the 911 GT3. Clearly the driver of the red GT3 has a little more experience in the art of making donuts. To the enjoyment of purists lamenting the good old days of normal aspiration, the 911 GT3 rather steals the show.

See more of our 2017 Goodwood Festival of Speed coverage HERE.