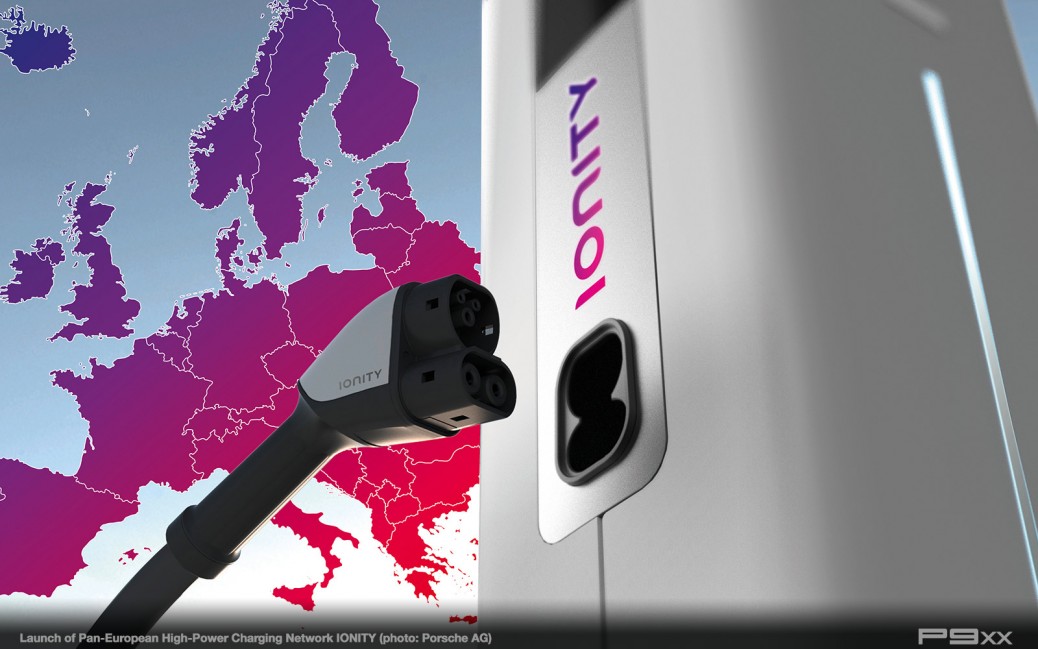 Stuttgart/Munich. BMW Group, Daimler AG, Ford Motor Company and the Volkswagen Group with Audi and Porsche today announced joint venture IONITY that will develop and implement a High-Power Charging (HPC) network for electric vehicles across Europe. Launching approximately 400 HPC stations by 2020, IONITY will make long-distance journeys easier and marks an important step for electric vehicles. Based in Munich, Germany, the joint venture is led by Chief Executive Officer Michael Hajesch and Chief Operating Officer Marcus Groll, with a growing team, set to number 50 by the start of 2018.

A total of 20 stations will be opened to the public this year, located on major roads in Germany, Norway and Austria, at intervals of 120 km, through partnerships with “Tank & Rast”, “Circle K” and “OMV”. Through 2018, the network will expand to more than 100 stations, each one enabling multiple customers, driving different manufacturer cars, to charge their vehicles simultaneously. With a capacity of up to 350 kW per charging point, the network will use the European charging standard Combined Charging System to significantly reduce charging times compared to existing systems. The brand-agnostic approach and Europe-wide distribution is expected to help make electrified vehicles more appealing.

Choosing the best locations takes into account potential integration with existing charging technologies and IONITY is negotiating with existing infrastructure initiatives, including those supported by the participating companies as well as political institutions. The investment underlines the commitment that the participating manufacturers are making in electric vehicles and relies on international co-operation across the industry.

The founding partners, BMW Group, Daimler AG, Ford Motor Company and the Volkswagen Group, have equal shares in the joint venture, while other automotive manufacturers are invited to help expand the network.

About AUDI AG
The Audi Group, with its brands Audi, Ducati and Lamborghini, is one of the most successful manufacturers of automobiles and motorcycles in the premium segment. It is present in more than 100 markets worldwide and produces at 16 locations in twelve countries. 100 percent subsidiaries of AUDI AG include Audi Sport GmbH (Neckarsulm), Automobili Lamborghini S.p.A. (Sant’Agata Bolognese, Italy) and Ducati Motor Holding S.p.A. (Bologna, Italy). In 2016, the Audi Group delivered to customers about 1.868 million automobiles of the Audi brand, 3,457 sports cars of the Lamborghini brand and 55,451 motorcycles of the Ducati brand. In the 2016 fiscal year, AUDI AG achieved total revenue of €59.3 billion and an operating profit of €3.1 billion. At present, approximately 88,000 people work for the company all over the world, more than 60,000 of them in Germany. Audi focuses on sustainable products and technologies for the future of mobility.

About the BMW Group
With its four brands BMW, MINI, Rolls-Royce and BMW Motorrad, the BMW Group is the world’s leading premium manufacturer of automobiles and motorcycles and also provides premium financial and mobility services. As a global company, the BMW Group operates 31 production and assembly facilities in 14 countries and has a global sales network in more than 140 countries. In 2016, the BMW Group sold approximately 2.367 million cars and 145,000 motorcycles worldwide. The profit before tax was approximately € 9.67 billion on revenues amounting to € 94.16 billion. As of 31 December 2016, the BMW Group had a workforce of 124,729 employees. The success of the BMW Group has always been based on long-term thinking and responsible action. The company has therefore established ecological and social sustainability throughout the value chain, comprehensive product responsibility and a clear commitment to conserving resources as an integral part of its strategy.

About Daimler AG
Daimler AG is one of the world’s most successful automotive companies. With its divisions Mercedes-Benz Cars, Daimler Trucks, Mercedes-Benz Vans, Daimler Buses and Daimler Financial Services, the Daimler Group is one of the biggest producers of premium cars and the world’s biggest manufacturer of commercial vehicles with a global reach. Daimler Financial Services provides financing, leasing, fleet management, insurance, financial investments, credit cards, and innovative mobility services. The company’s founders, Gottlieb Daimler and Carl Benz, made history with the invention of the automobile in the year 1886. As a pioneer of automotive engineering, it is a motivation and commitment of Daimler to shape safely and sustainably the future of mobility: The Group’s focus is on innovative and green technologies as well as on safe and superior automobiles that appeal and fascinate. Daimler consequently invests in the development of efficient drive trains with the long-term goal of locally emission-free driving: from high-tech combustion engines about hybrid vehicles to electric drive trains powered by battery or fuel cell. Furthermore, the company follows a consistent path towards intelligent connectivity of its vehicles, autonomous driving and new mobility concepts. This is just one example of how Daimler willingly accepts the challenge of meeting its responsibility towards society and the environment. Daimler sells its vehicles and services in nearly all the countries of the world and has production facilities in Europe, North and South America, Asia, and Africa. Its current brand portfolio includes, in addition to the world’s most valuable premium automotive brand, Mercedes-Benz (Source: Interbrand-Study „The Anatomy of Growth“, 10/5/2016), as well as Mercedes-AMG, Mercedes-Maybach and Mercedes me, the brands smart, EQ, Freightliner, Western Star, BharatBenz, FUSO, Setra and Thomas Built Buses, and Daimler Financial Services’ brands: Mercedes-Benz Bank, Mercedes-Benz Financial Services, Daimler Truck Financial, moovel, car2go and mytaxi. The company is listed on the stock exchanges of Frankfurt and Stuttgart (stock exchange symbol DAI). In 2016, the Group sold around 3 million vehicles and employed a workforce of more than 282,000 people; revenue totalled €153.3 billion and EBIT amounted to €12.9 billion.

About Porsche AG
Dr. Ing. h.c. F. Porsche AG based in Stuttgart-Zuffenhausen, Germany, is the world’s leading manufacturer of exclusive sportscars. In 2016, the company delivered around 237,000 new vehicles to its customers around the world, generating sales of EUR 22.3 billion. The company’s operating income sat at EUR 3.9 billion, making Porsche one of the world’s most profitable automotive manufacturers. Porsche founded the sportscar segment more than 50 years ago with the release of the iconic 911 sportscar. Further model lines have since followed in the form of the 718 Boxster, 718 Cayman, Panamera, Macan, Cayenne and 918 Spyder. Porsche is also setting milestones when it comes to plug-in hybrid drives: Porsche was the first manufacturer to introduce this technology in high-performance sportscars (918 Spyder), exclusive saloons (Panamera S E-Hybrid) and premium off-road vehicles (Cayenne S E-Hybrid). What’s more, with the tests on the 919 Hybrid prototype, Porsche is already achieving success working on the technology of tomorrow in the LMP1 class of the World Endurance Championship (WEC). This technology is also set to be used in the first purely electric series-production sportscar that will be launched by the end of the decade in the form of the “Mission E”. In total, Porsche AG employs a staff of around 28,000 across the globe through 70 subsidiaries. Production facilities have been established in Zuffenhausen (for the 911, 718 Boxster und 718 Cayman) and Leipzig (for the Panamera, Macan and Cayenne). The development, design and motorsports departments are based in the Development Centre in Weissach, Germany.

About the Volkswagen Group
The Volkswagen Group with its headquarters in Wolfsburg is one of the world’s leading automobile manufacturers and the largest carmaker in Europe. The Group comprises twelve brands from seven European countries: Volkswagen Passenger Cars, Audi, SEAT, ŠKODA, Bentley, Bugatti, Lamborghini, Porsche, Ducati, Volkswagen Commercial Vehicles, Scania and MAN. Each brand has its own character and operates as an independent entity on the market. The product spectrum ranges from motorcycles to small cars and luxury vehicles. In the commercial vehicle sector, the products include ranges from pick-ups, buses and heavy trucks. The Group operates 121 production plants in 20 European countries and a further 11 countries in the Americas, Asia and Africa. Every weekday, 610,076 employees worldwide produce nearly 42,000 vehicles, and work in vehicle-related services or other fields of business. The Volkswagen Group sells its vehicles in 153 countries. With its “TOGETHER – Strategy 2025″ future program, the Volkswagen Group is paving the way for the biggest change process in its history: the realignment of one of the best carmakers to become a globally leading provider of sustainable mobility.