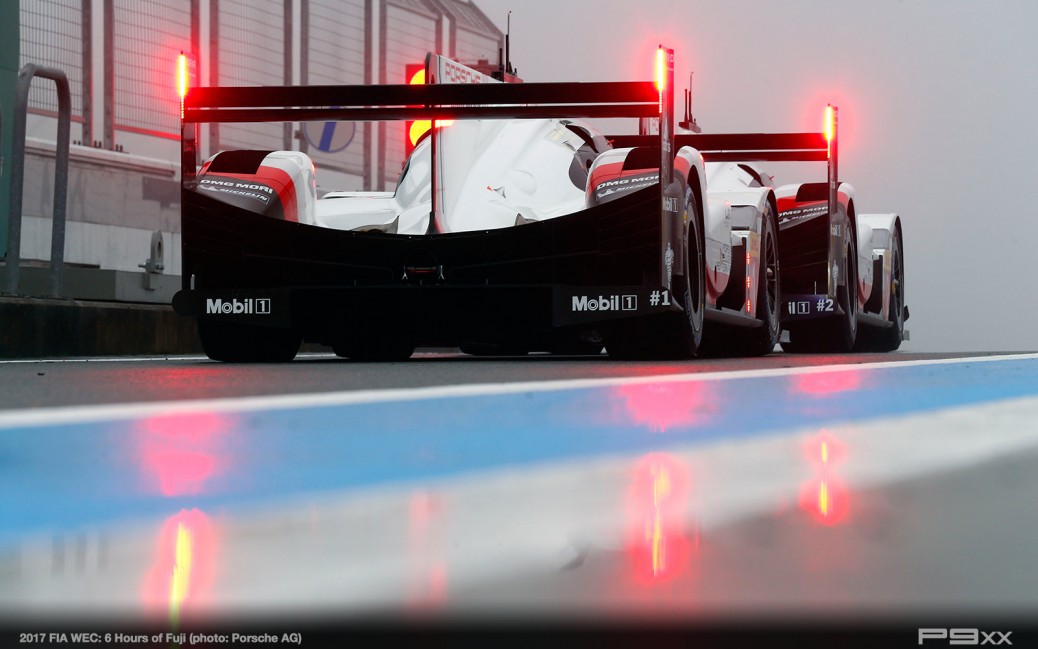 Stuttgart. The two Porsche 919 Hybrids will start from the front row for the six-hour race at the Fuji International Speedway. Championship leaders Earl Bamber (NZ), Timo Bernhard (DE) and Brendon Hartley (NZ) took pole position in front of the sister car in the hands of reigning world champion Neel Jani (CH), André Lotterer (DE) and Nick Tandy (GB). It is the 19th pole position for the 919 Hybrid since its race debut in 2014 and the fourth in 2017.

The weather situation in Japan remains the main topic of the seventh of nine rounds of the FIA World Endurance Championship (WEC). With the track being wet at varying levels in all practice sessions, it was difficult to get the cars’ set-up right. To avoid an approaching downpour, qualifying was advanced by half an hour but it still rained. For the race on Sunday, 11:00-17:00 hrs local time, more rain is forecast.

Qualifying drivers this time were Bamber and Hartley for car number 2. The average of their best lap times was 1:35.160 minutes. Lotterer and Tandy at the wheel of car number 1 came second with an average lap time of 1:35.231 minutes. The overall fastest lap on the 4.56 kilometre long speedway in the foothills of Mount Fuji was recorded by Tandy in 1:35.068 minutes. Free practice three on Saturday morning saw the two 919 Hybrids finishing second and third.

Ahead of the Japanese round of the world championship, Porsche leads the manufacturers’ classification on 243 points, followed by Toyota (168.5 points). In the drivers’ championship,

Bamber/Bernhard/Hartley have scored 160 points, having won at Le Mans, the Nürburgring, in Mexico City and in Austin. Should they finish the race ahead of Toyota drivers Sébastien Buemi (CH) and Kazuki Nakajima (JP), who each have 108 points, they become the new world champions. Timo Bernhard did not drive today.

Fritz Enzinger, Vice President LMP1: “Due to the bad weather forecast for tomorrow it is very important to have both Porsches starting from the front row – this could be an advantage for us. We have again collected another point in the defence of both world championship titles. As expected, Toyota was very fast. A huge compliment to our whole team for a tremendous concerted effort. Now we are looking forward to an endurance race that will be the third last for us with the 919 Hybrid.”

Andreas Seidl, Team Principal: “Congratulations to the entire team for another front row lock-out – the third time in a row. The weather conditions made it a really difficult day for us, in free practice 3 we were struggling. But the team did a super job with the changes to both 919 Hybrids before qualifying. We could use the cars’ full potential and the drivers did brilliantly on track. However, qualifying is just a small step. For tomorrow the weather forecast is even worse. The race will be a big challenge.”

Drivers Porsche 919 Hybrid car number 1:
Neel Jani (33, Switzerland): “Today I only did a few laps in free practice three. There was a lot less water on the track than yesterday, but somehow it was very greasy. We have to analyse why it was so slippery. The rest we will see. Regarding the weather, tomorrow will be a kind of survival training.”

André Lotterer (35, Germany): “It was very slippery on the wet track. Unfortunately we just missed out on pole position. I tried a second attempt but got stuck in traffic. It didn’t work out. But, of course, another 1-2 in qualifying for Porsche is good.”

Nick Tandy (32, Great Britain): “Qualifying was really difficult in the wet conditions because you obviously don’t want to make a mistake as you need to put a lap time in but you still need to push. In the end we got the fastest lap times with both our cars. I’m especially pleased for Earl as it is his first pole position in WEC and it is good the number 2 car got the one point for the championship as well.”

Drivers Porsche 919 Hybrid car number 2
Earl Bamber (27, New Zealand): “It is fantastic to get another one-two for the team and to get my first ever pole position in the WEC. To share with BH, a fellow Kiwi as well, is very special for me. It was a hard fight with car number 1. They really threw everything out of their window and we both were backed up as well. It was a great effort from the team and from Porsche.”

Brendon Hartley (27, New Zealand): “It could be any conditions for the race tomorrow, perhaps even with monsoon conditions coming. This one point we got for pole position today could prove to be very crucial in the fight for the championship title. Lap times in qualifying were pretty close and we are obviously very happy with the result.”

TV and live streaming:
– The official WEC App can be downloaded free of charge with an extended (not free of charge) version available which includes full live streaming and full timing. The live stream is voiced by the FIA WEC TV team including live interviews from the pits.
– The WEC races can be followed on various international TV channels in Europe, Asia, Australia and New Zealand, North and South America as well as in the Middle East and Africa. Details at http://preview.tinyurl.com/y994hbo5