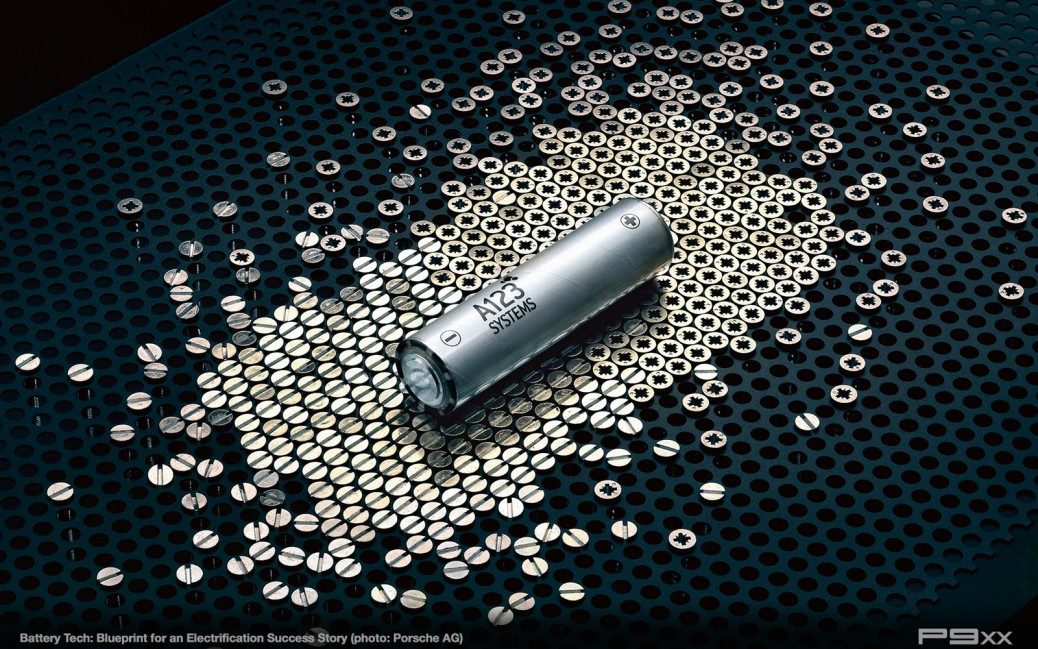 The electrification of vehicles presents engineers and scientists with new challenges. Even more than the electric motor, the battery system plays a key role. Its functional principle allows various different structural designs and properties. Only a precise knowledge of fundamentals and solution approaches enables targeted further development for use in electric vehicles.

Design and manner of functioning
A battery system is generally comprised of multiple modules, which in turn are made up of individual battery cells. The main components of a battery cell are the anode and the cathode, the separator, the electrolyte and the cell case. The electrodes consist of a thin metal foil (current collector) coated with an electrode film. In the case of lithium-ion cells, the aluminum foil of the cathode is frequently coated with an electrode film based on transition metal oxides such as lithium nickel manganese cobalt oxides. The anode typically consists of a copper foil coated with a graphite-containing electrode film. The porous electrode films consist primarily of the active material and to a lesser extent of conductive carbon additives and polymeric binders. The two electrodes are electrically isolated from each other by the separator — a semipermeable membrane — in order to prevent a short circuit. Separators are frequently made of microporous plastics like polyethylene. They can also be stabilized by ceramic particles. The pores in the electrodes and the separator are saturated with an electrolyte that serves as a lithiumion conductor. Solutions of organic carbonates — for instance ethylene carbonate — and a conductive salt such as lithium hexafluorophosphate are commonly used as electrolytes.

Further development of the materials for lithium-ion cells
The first time a lithium-ion cell is charged, a surface layer forms on the anode. The formation of this so-called SEI (solid electrolyte interface) layer is an inevitable and irreversible process, which results in the loss of lithium ions. However, a stable SEI protects the anode structure against destruction.

Fundamentally, five criteria are in the focus of the further development of lithium-ion cells: safety, lifetime, power, cost and energy. Increasing the cell energy is crucial here in order to fulfill the significant demands with respect to the driving range of electric cars at the lowest possible mass volume of the battery. The energy is the product of the average cell voltage U and the cell capacity Q (E = U x Q). In relation to the cell mass or cell volume, one speaks of the specific energy (Wh / kg) or the energy density (Wh / l). To increase these two values, specific core materials are further developed and optimized.

Cathode active materials
The list of cathode active materials is extensive. One important substance class is the transition metal layer oxides, with lithium nickel manganese cobalt oxides (NMC) prominent among them. NMC-111, for example, has already proven effective in commercial lithium-ion cells in the automotive sector. However, building electric cars with high driving ranges requires cathode active materials that enable higher specific cell energies, which is fueling a spike in the prevalence of nickel-rich NMC materials with high reversible capacities on the market. NMC-622 has recently become available for automotive lithium-ion cells. How lithium-ion cells work
Moreover, the optimization of the cathode active material NMC-811 is in progress. Generally, the higher the nickel content, the higher the cell energy, but the cyclic stability of the respective lithium-ion cells declines. Nevertheless, nickel-rich NMC materials have great potential and will presumably be used in cells for automotive. battery systems in the near future. Lithium nickel cobalt aluminium oxide (NCA) has been commercially available for quite some time and already powers electric vehicles on the road today. At temperatures over 40 °C, however, cells with NCA demonstrate a shorter cycle life and a lower current rate capability compared to nickel-rich NMC materials.

Recently, two new cathode active materials promise a significant increase of the specific cell energy: on the one hand, lithium-rich NMC materials and on the other hand highvoltage spinels. However, both materials are still in the research phase and will require significant optimization. Furthermore, sulfur is being investigated as a cathode active material, due to its low costs and high specific capacity (energy per gram sulfur). Nevertheless, compared to conventional lithium-ion cells, lithium-sulfur cells have a significantly lower energy density (energy per cell volume).

Anode active materials
At present, primarily graphites (figure at bottom right) are used as anode active materials. Generally, three graphite types are applied in lithium-ion cells. MCMBs (mesocarbon microbeads), synthetic or natural graphites. All three graphitic carbons have comparable specific capacities and thus enable similar specific cell energies. MCMBs are spherical particles. They provide very good cycling characteristics, but are relatively expensive. Hence, mainly natural and synthetic graphites are used in lithium-ion cells. In the context of further improving the specific energy of cells, silicon is increasingly moving in the focus of research as an anode active material as it has a specific capacity roughly nine times higher than that of graphite. However, during the insertion and extraction of lithium ions, massive volume changes of the silicon particles take place which adversely impact the cycle life. For this reason, electrodes that exclusively use pure silicon as the active material have not, to date, been applied in commercial cells.

One possible way to increase the cell energy while minimizing volume changes is the use of siliconcarbon composites with pure silicon contents of just 5 % to 20 %. They are promising candidates to significantly increase the specific energy of lithium-ion cells, but still have to be sufficiently optimized. From an energetic point of view, metallic lithium, as the lightest solid element in the periodic table, represents the ideal anode active material since it provides the highest specific capacity. This characteristic is advantageous in non-rechargeable, commercial lithium cells. In the case of rechargeable lithium-ion cells, however, severe problems occur in combination with liquid, organic carbonates. The SEI that forms on the lithium metal surface is not stable. This leads to a constant consumption of electrolyte and lithium. Moreover, when the lithium is redeposited on the metallic anode surface, -needle-like structures can form. These lithium “dendrites” represent a major safety problem because they can grow through the separator and cause an internal short circuit in the cell. Currently, research is being done to replace liquid electrolytes by solid electrolytes to enable lithium metal to be used as the anode active material in an all-solid-state cell.

Thinner separators for higher energy densities
As already mentioned, currently mainly separators made of polyolefins, which are in some cases stabilized by ceramic particles, are used in commercial lithium-ion cells. The trend here is towards thinner separators (< 20 μm) for the development of high energy cells. Structure of graphite
In all-solid-state cells, the classic separator should be completely replaced by a very thin layer of solid electrolytes. By this way, higher energy densities could be gained.

Nowadays, lithium-ion cells for the automotive sector use solvents such as organic carbonates in which a conductive salt is dissolved. These components determine the main properties of the electrolyte, such as the ionic conductivity. Low amounts of additives can further improve the adaptation to the cell chemistry of the lithium-ion cell. Currently, work is under way on new electrolyte formulations for high-energy active materials, although major challenges, including electrochemical stability over 4.2 volts, still have to be overcome. At the same time, massive research efforts are being undertaken in the field of solid electrolytes for an all-solid-state cell with high cell energy. The big problem with pure solid electrolytes is their low conductivity compared to liquid electrolytes. For this reason, initial efforts are focusing on partially liquid concepts with ionic liquids, for example. While they do not yet meet automotive requirements, solid-state cells have a great deal of promise in principle.

In contrast to round jelly rolls, prismatic jelly rolls exert less total mechanical stress on the electrodes. In addition, they have a better temperature distribution. The cell-interior density, however, is lower compared to cylindrical cells due to the housing edges. A frequently used variant in the automotive sector is the PHEV2 hard-case cell. The stacked electrode-separator arrangement exerts the lowest mechanical stress on the electrodes. The heat distribution is also uniform and the contact between the electrodes and the separator is homogeneous. Due to the separator overhang, the interior density of this cell type is a little lower than with cylindrical jelly rolls. Moreover, the production speed is slower compared to the winding technique. The right-hand figure on the opposite page shows a pouch cell with a stacked electrode-separator arrangement for the use in electric vehicles.

Safe and light cell housings are still contradictory
Regarding the cell housings for the above-mentioned electrode- separator arrangements, hard cases have the advantage over compound foils that the side walls are highly resistant to deformation. Moreover, a CID (current interruption device) can be integrated as a passive safety element. The CID is activated when high pressure forms within the cell and cuts the connection between the electrode and the external pole of the cell. Consequently, the lithium-ion cell is deactivated before a critical state emerges. However, the production of hard cases is complex and expensive from a technical standpoint due to the number of components. In addition, these stable cell cases also have a high intrinsic weight, which has a negative impact on the specific energy of such cells.

Various designs of lithium-ion cells: A Cylindrical cell, B Prismatic cell, C Pouch cell
Compound foil-cell housings, by contrast, have a very low intrinsic weight and consist of substantially fewer components. This makes it possible to achieve high specific energies. Due to the flexible shape of pouch cells, however, the side walls are easily deformable and penetrable. Mechanical stability is only achieved through additional side walls in a module. Moreover, laminated compound foil-cell housings cannot accommodate passive safety elements.

Porsche expertise for the selection of the best-suited lithium-ion cell
Lithium-ion cells are complex and very multifaceted systems. The wide range of materials available for the various cell components and the cell design are correlated with individual characteristics leading to different advantages and disadvantages in terms of safety, service life, output, costs and energy. A precise understanding of the lithium-ion cell including all chemical and physical processes is, however, the prerequisite for the selection of the most suitable cell for the respective vehicle—whether it is a sports car or another vehicle in which Porsche Engineering is involved in the development process.