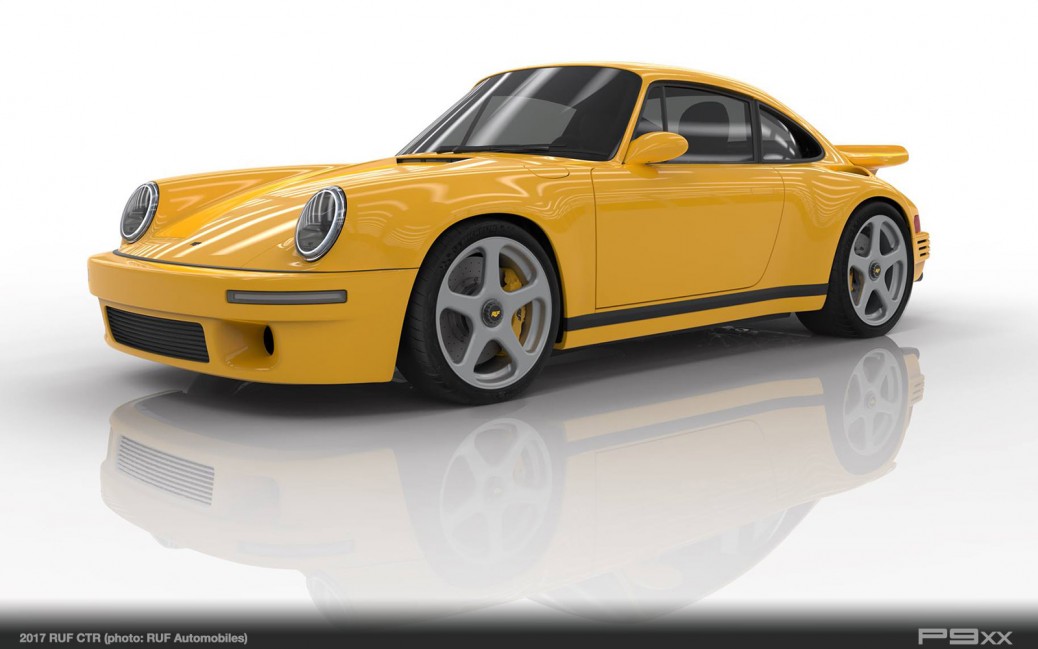 Geneva, Switzerland, March 7, 2017 – Revered sports car manufacturer RUF Automobile GmbH unveiled the latest generation of its famed CTR halo car today during the 87th Geneva Motor Show. This is the first RUF sports car to be based on a chassis completely of the firm’s own design with a body that pays tribute to the 1987 CTR “Yellow Bird.”

“The concept for the 2017 CTR is one that I have had in my head for a very long time,” said Alois Ruf, President and owner of RUF Automobile GmbH. “We have been waiting for the right point in our history to build our own car and the 30th anniversary of the CTR ‘Yellow Bird’ is that moment.” New Chapter in a David and Goliath Story
Entering its fourth generation, the latest high-performance RUF supercar pays homage to the 1987 CTR Yellow Bird in both form and function. A weight-to-power ratio of only 3.5 lbs per horsepower, a first-ever rear-wheel drive bespoke carbon fiber monocoque chassis and an incredibly powerful engine are only some of the ingredients that make the latest CTR such a compelling work of automotive art.

Design inspiration comes directly from the 1987 Yellow Bird’s focus on aerodynamic efficiency. The silhouette, narrow body, rear air inlets and fascias are all direct nods to the company heritage. The body, now formed in carbon, calls back to the original car’s flushed look.

Center-locking 19-inch forged alloy wheels complete the design wrapped in tires measuring 245/35ZR19 in the front and 305/30ZR19 in the rear. Powerful, Traditional and Thoroughly Modern
Technological sophistication starts with the skin, which is made completely of carbon fiber. For the first time, the chassis beneath that surface – also made of carbon fiber – is a bespoke monocoque, a proprietary RUF design. The front and rear crash structures are built with lightweight, steel as is the integrated roll cage that are both designed to maximize occupant safety. In total, the extensive use of modern materials allows for an extremely light dry weight of 1,200 kg (2,640 lbs).

In order to truly pay tribute to the Yellow Bird, the latest CTR will be available exclusively with a newly-developed six-speed manual transmission that sends power to the rear wheels through a limited-slip differential.

“We began development on the new CTR five years ago with the goal of creating a thrilling, analog driving experience that combines an amazing power-to-weight ratio, manual transmission and modern racing technology,” said  Estonia Ruf. Minimalist Interior as a Mark of Analog Design
A minimalist two-seat interior designed with lightweight materials is a further acknowledgement of the 2017 CTR’s analog philosophy.

Alcantara is the upholstery of choice both for its aesthetics and weight saving properties that, in combination with leather and carbon fiber, give the cockpit a balance between modern and retro design. The seats are made of carbon fiber, and the pedals from aluminum. A three-spoke steering wheel is a further nod to the car’s racing pedigree, as are the analog dial-type gauges in a green typeface.

Series production is scheduled to begin by 2018 at RUF’s Pfaffenhausen, Germany, facility. The limited run will include 30 units not including the prototype unveiled during the 2017 Geneva Motor Show. A Nickname Turned Legend
The RUF CTR debuted in 1987. Capable of incredible speed, the 469-bhp twin-turbo CTR reached 342 km/h (213 mph) during testing on the Nardo Ring, a shocking speed for its time that is still impressive to this day. It was in the same year that RUF gained approval from the U.S. National Highway Transportation Safety Administration and Environmental Protection Agency to sell its cars in America. Shortly thereafter, Alois Ruf brought the car to Road & Track’s “World’s Fastest Car” competition at Volkswagen’s Ehra-Lessien test track in Germany.

The CTR was one of nine cars in attendance including a Ferrari Testarossa, a Lamborghini Countach 5000S and a Porsche 959.

The photographers from Road & Track noticed how the CTR’s bright paintwork stood out against the coincidentally dull weather and gave it the nickname “Yellow Bird.” What happened next would contribute to making that name stick forever.

About RUF Automobile Gmbh: In 1939, Alois Ruf Sr. first formed his company, AUTO RUF, as a general service garage. Despite a challenging economy, the company grew and in 1949 he added a gas station to the company complex. By 1955, Ruf Sr. recognized a need in Germany for a full-size tourist bus and challenged himself to build his own tour bus to run this as a separate business. In 1963, the company began specializing in Porsche vehicles, a direction that Alois Ruf Jr. vowed to continue when he assumed directorship of the company in 1974. In the following year, the first RUF-enhanced Porsche model made its debut. Now it is still family run by Alois and Estonia Ruf.